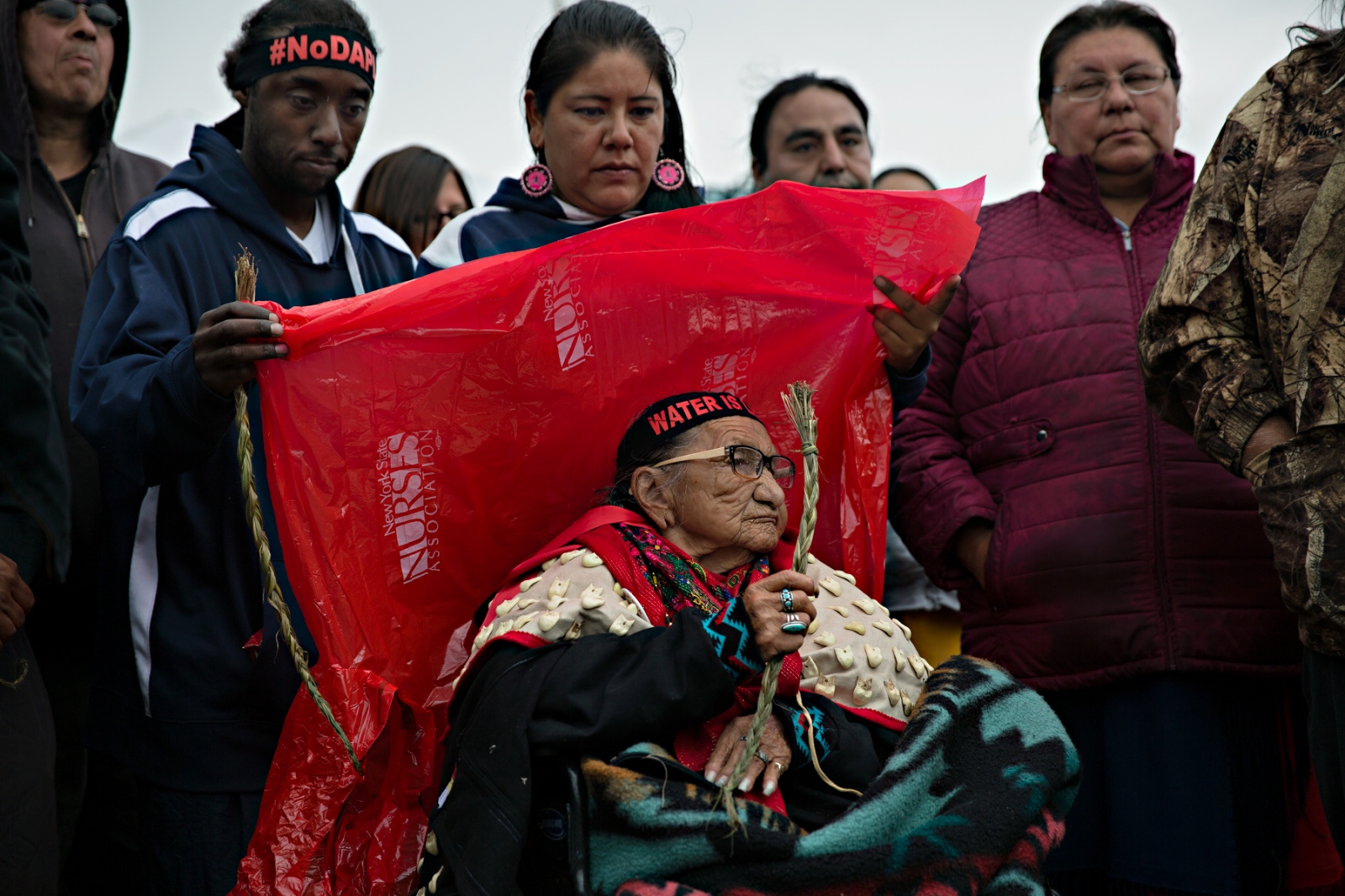 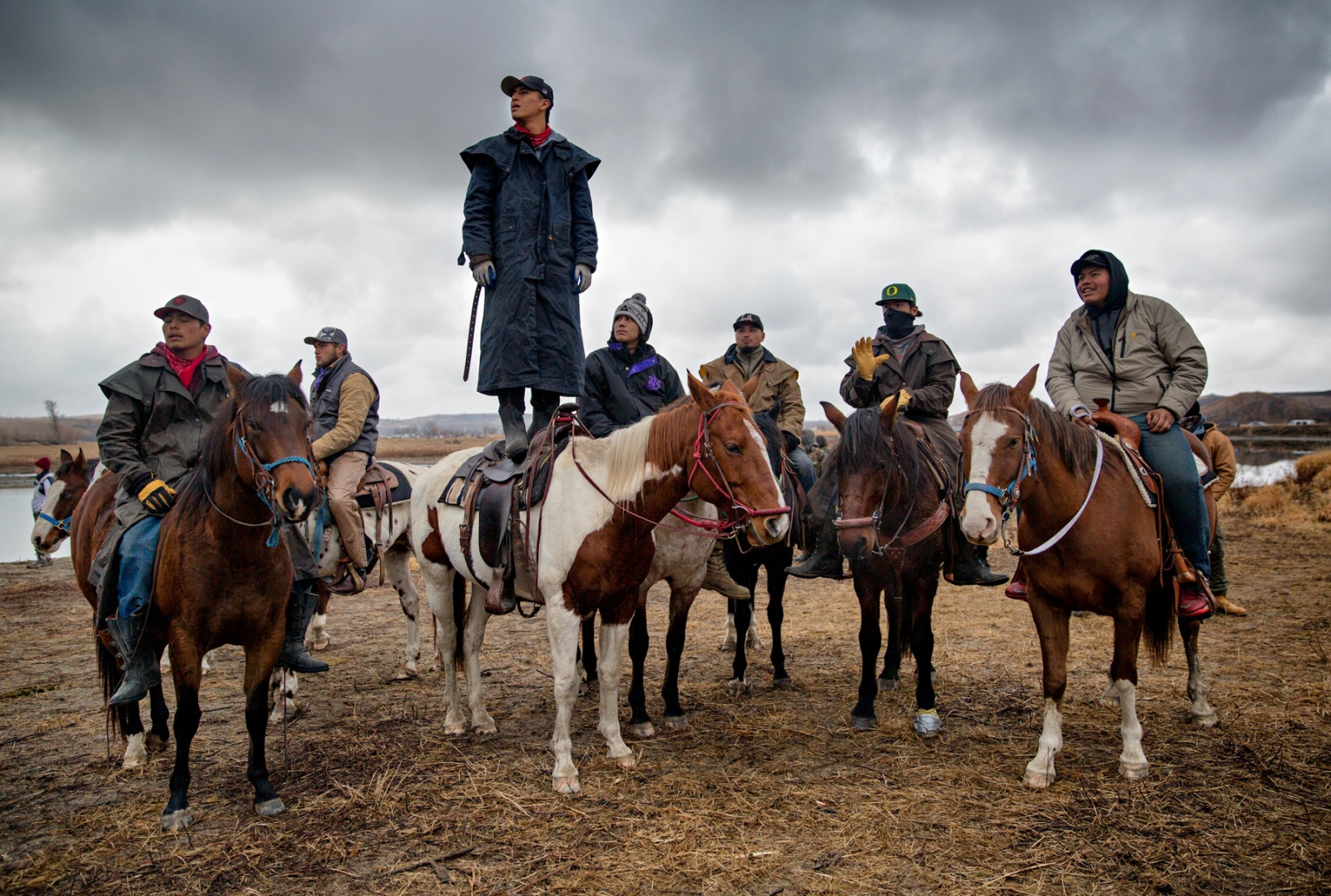 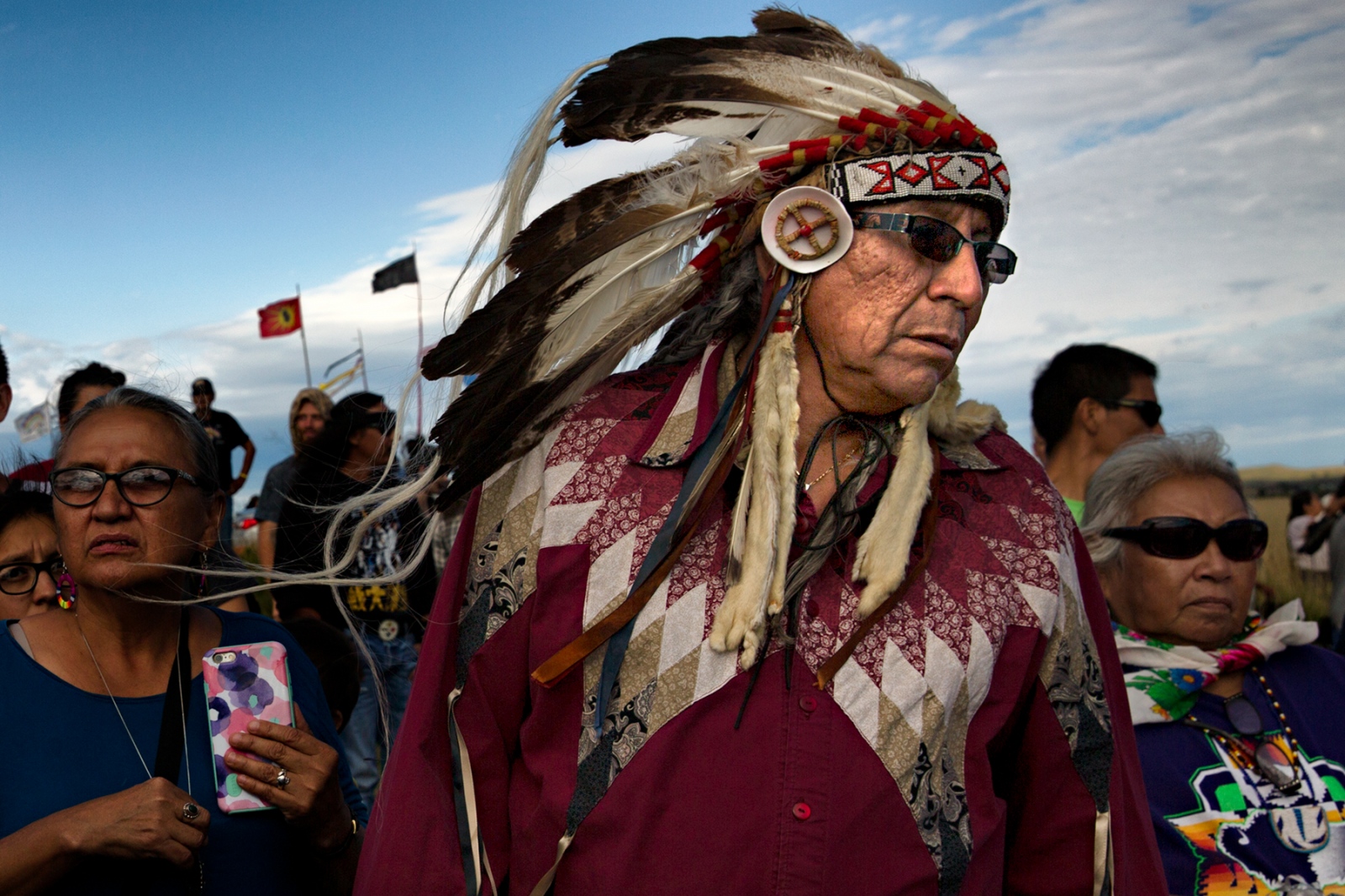 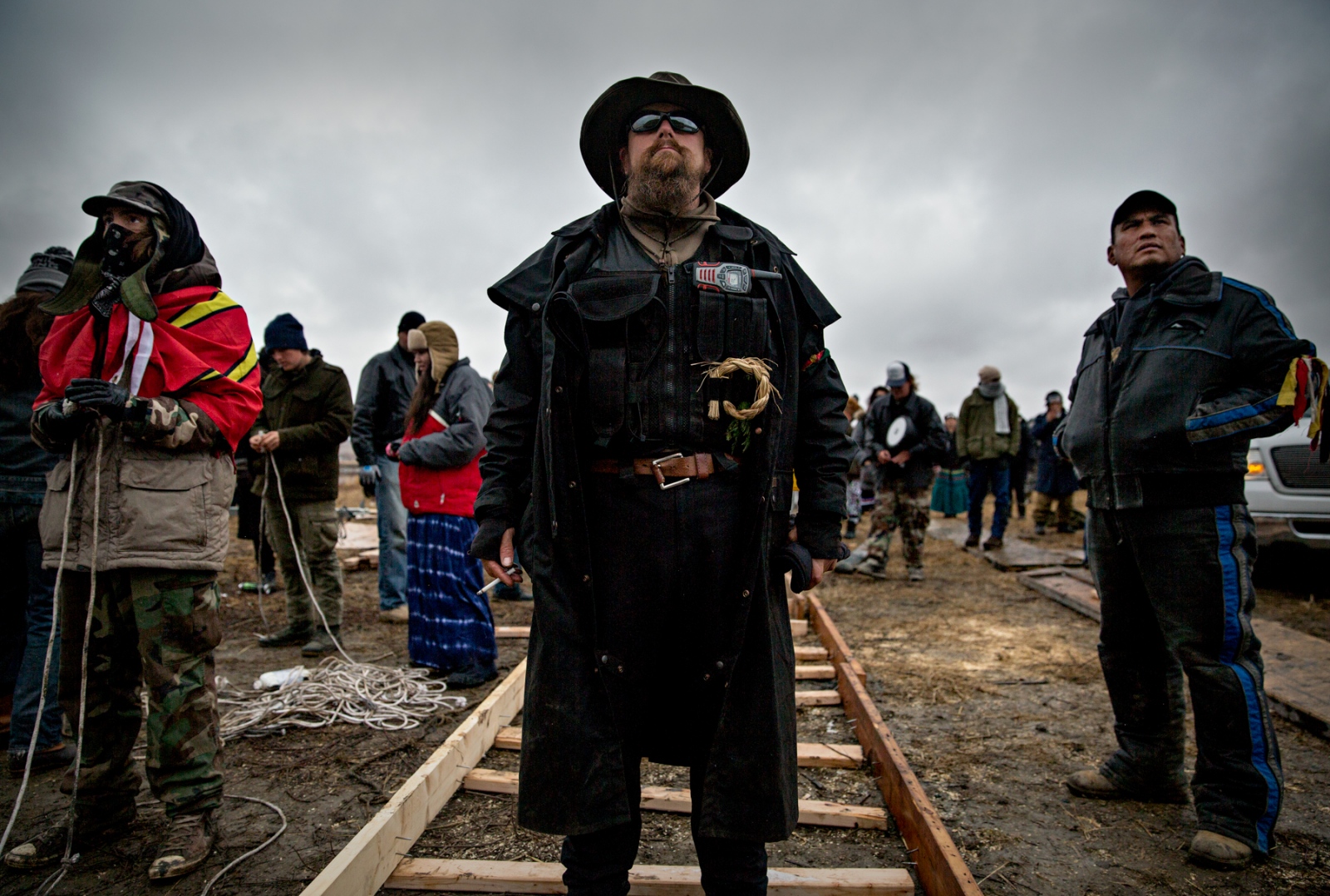 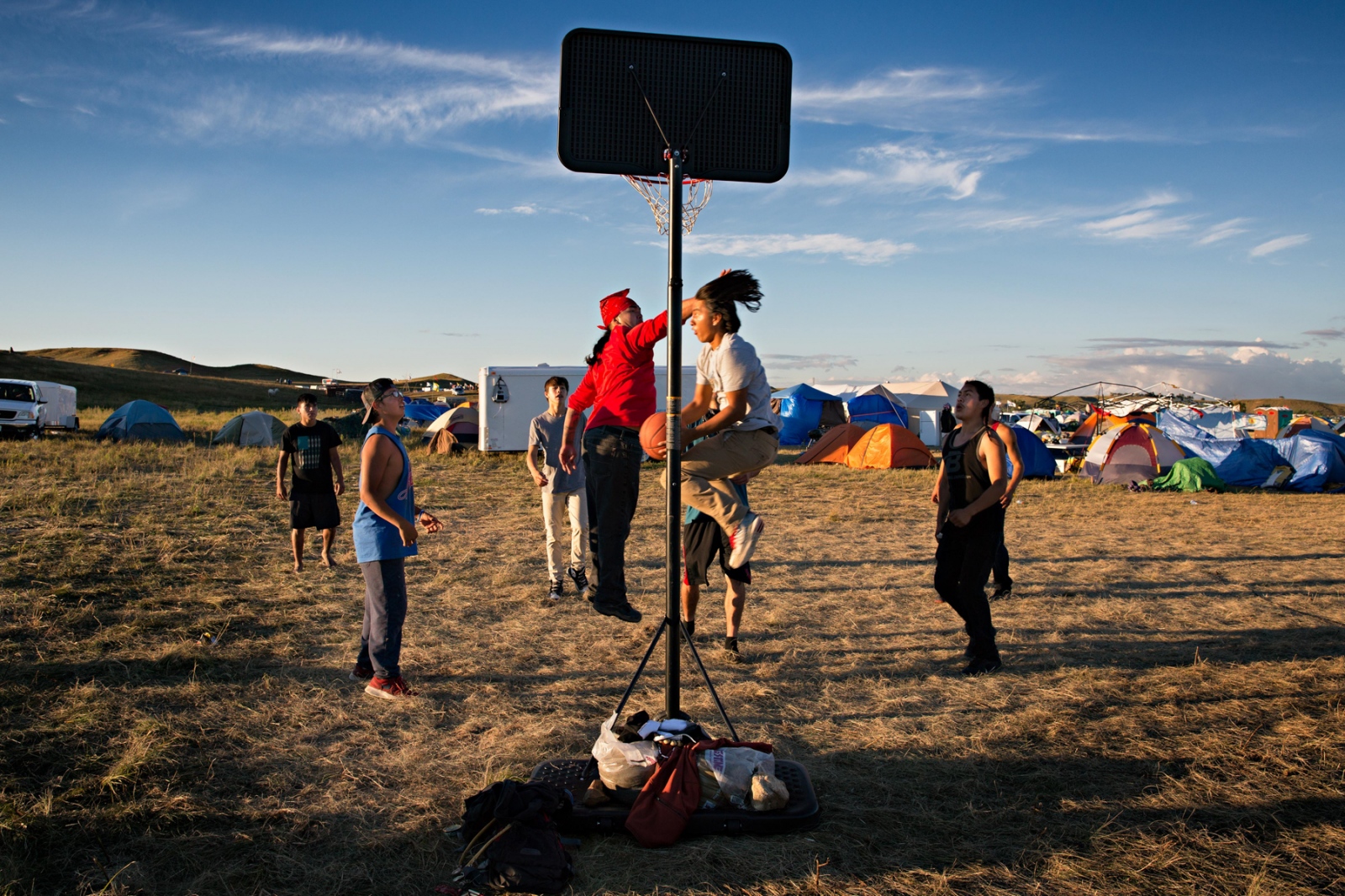 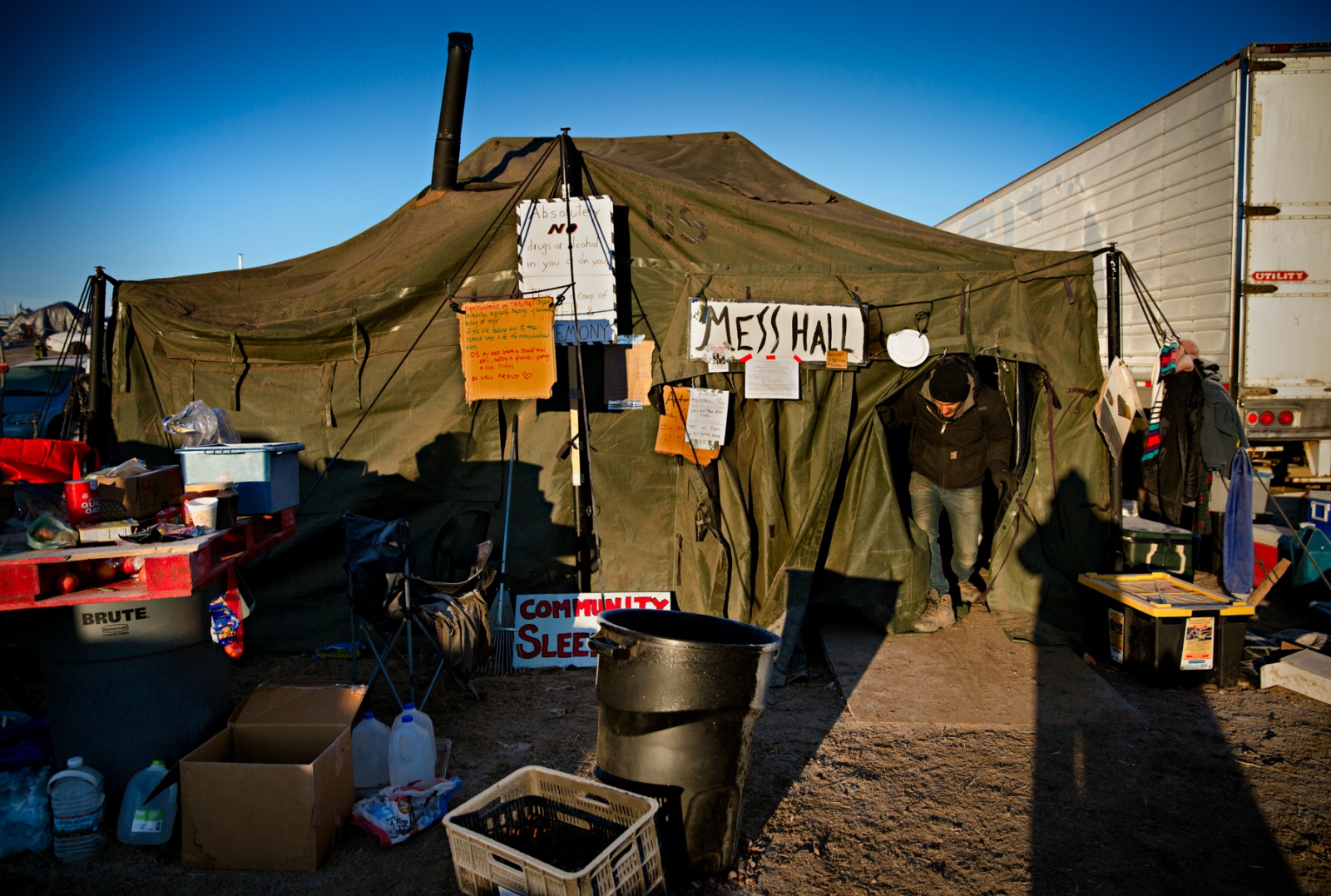 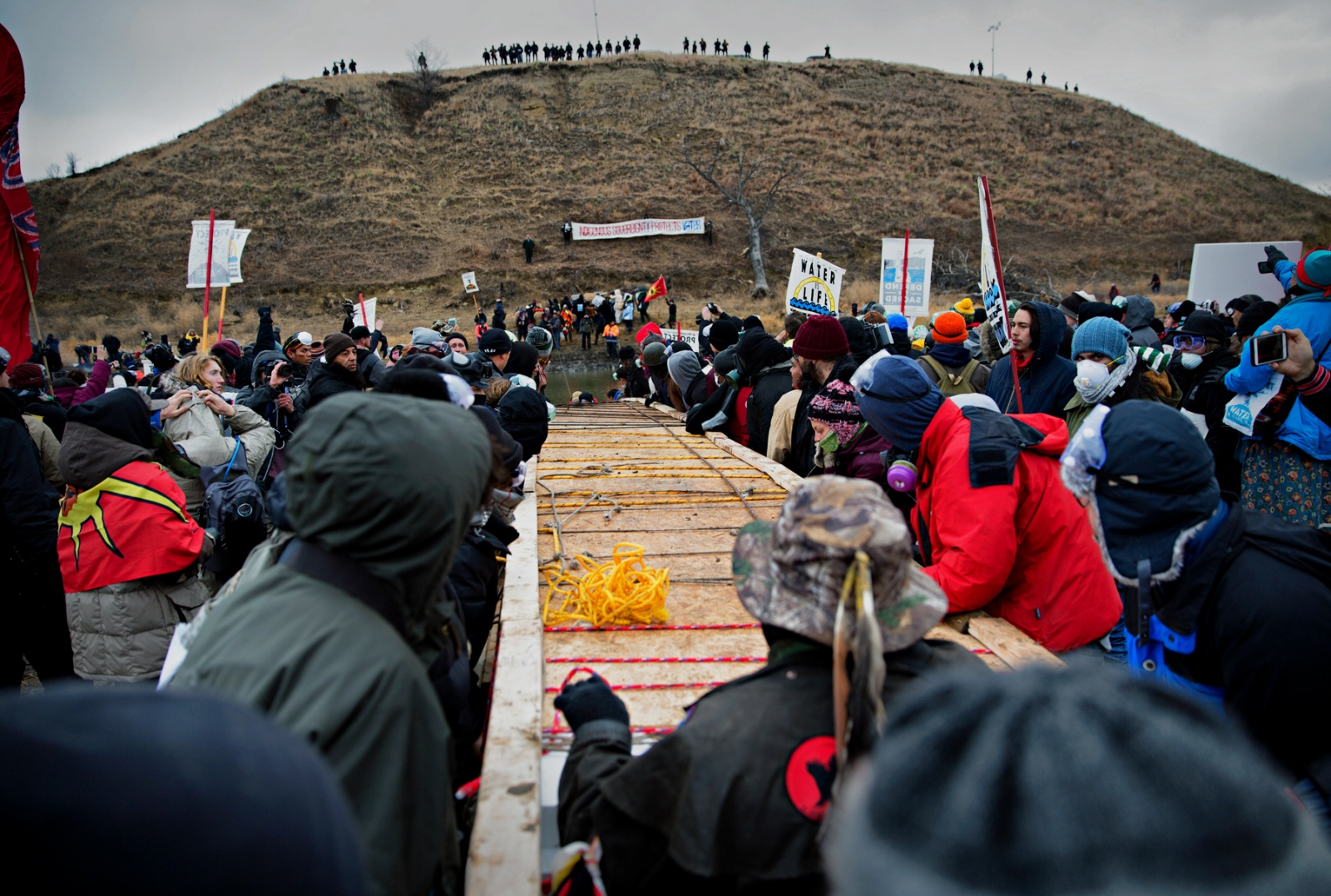 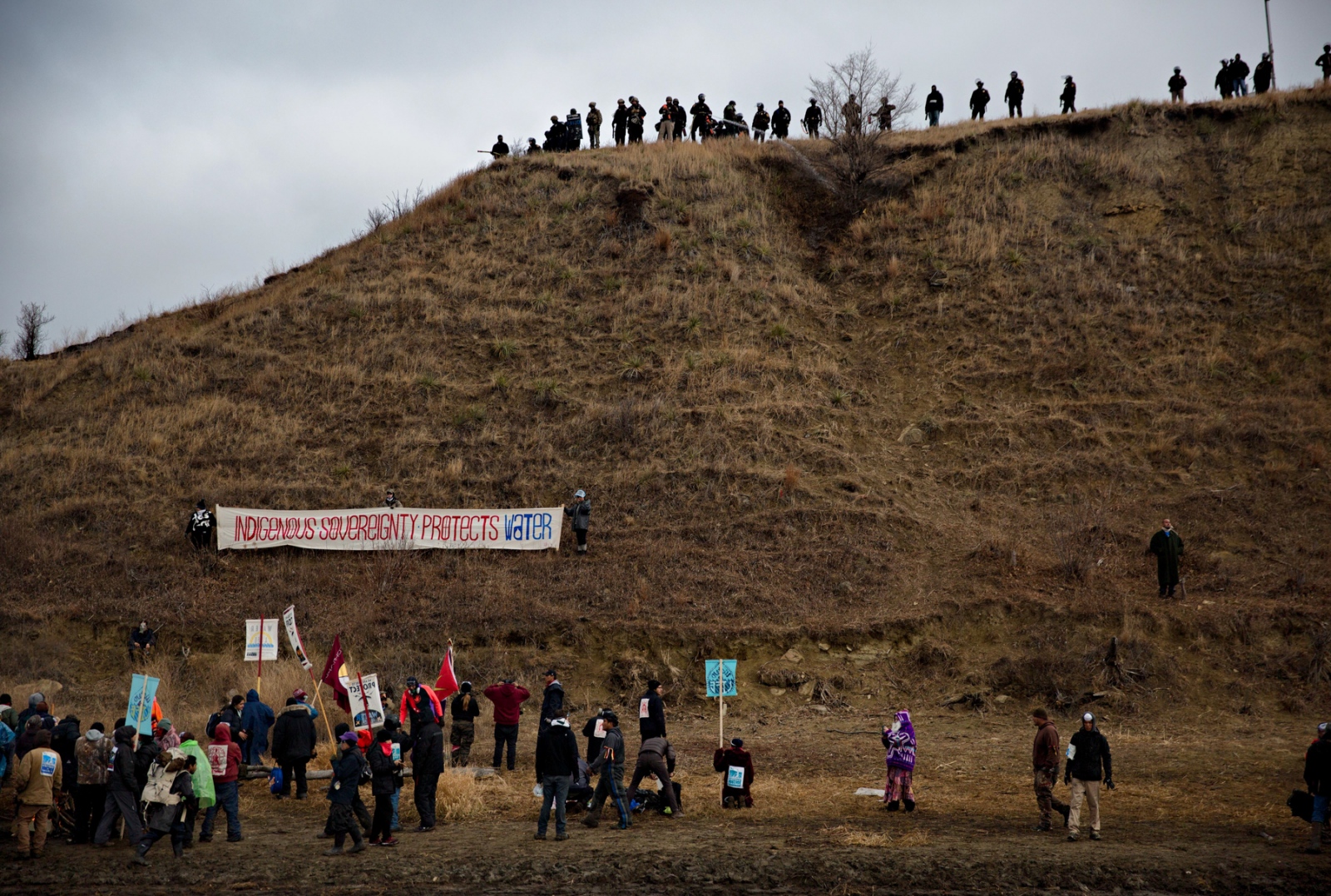 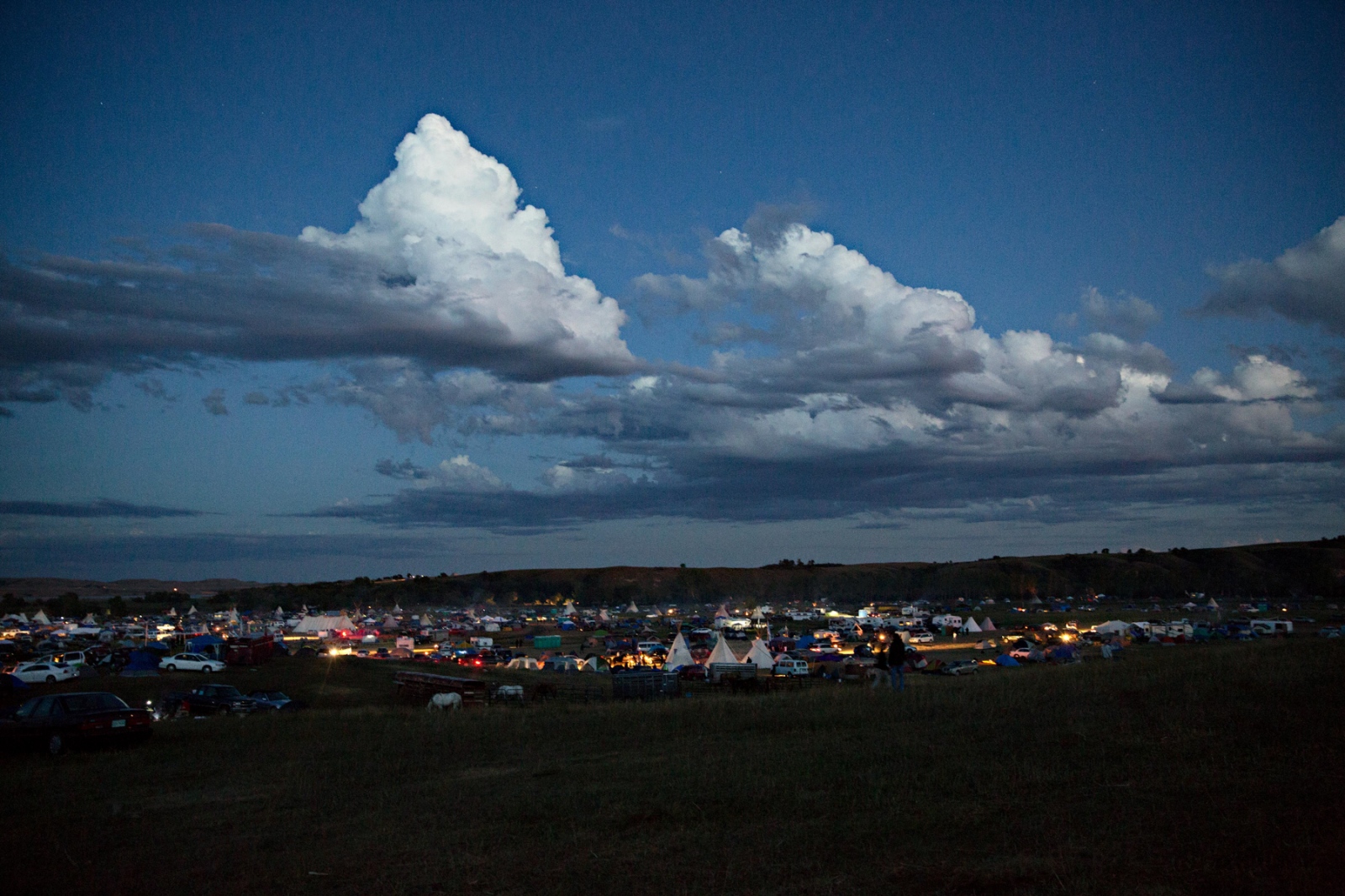 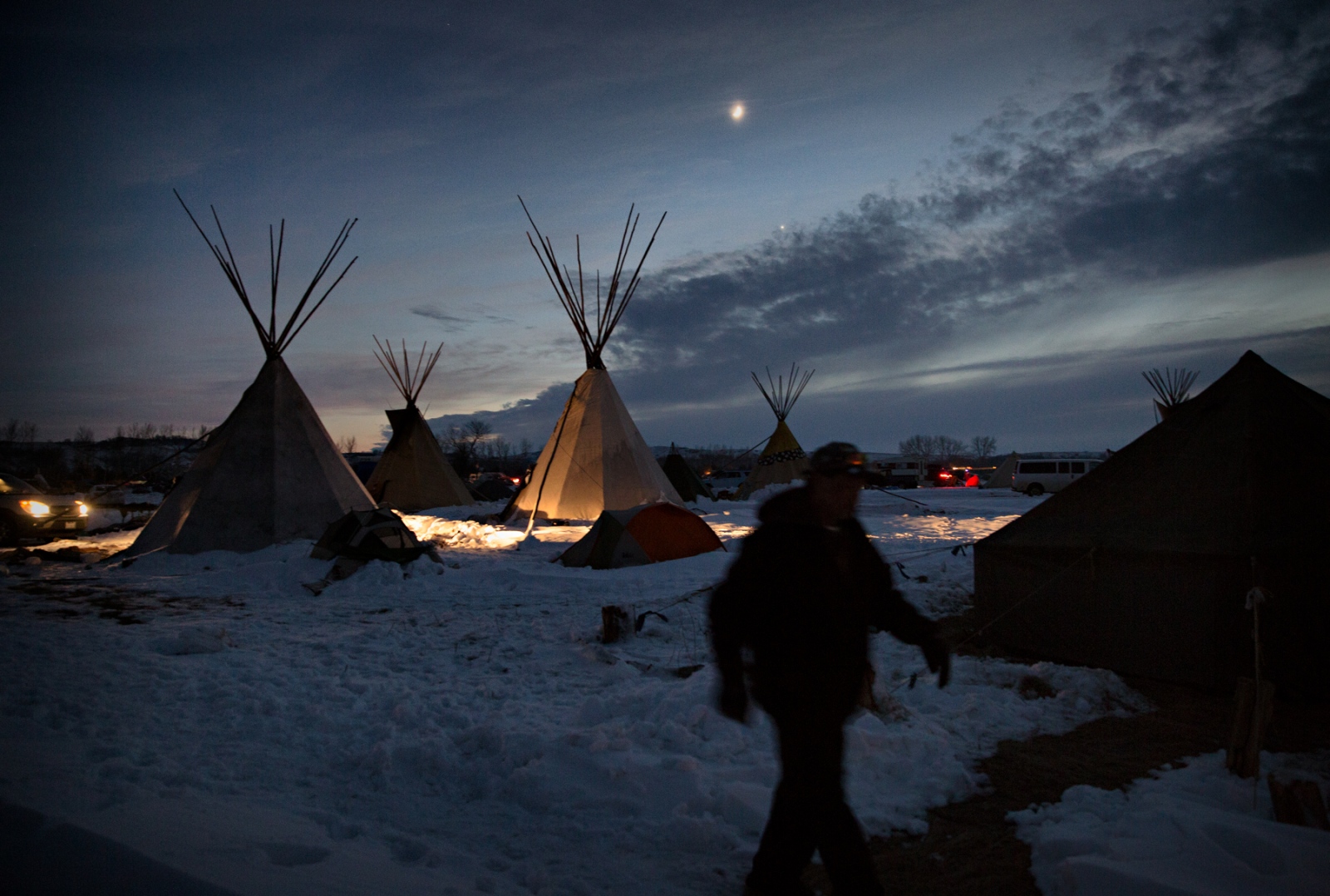 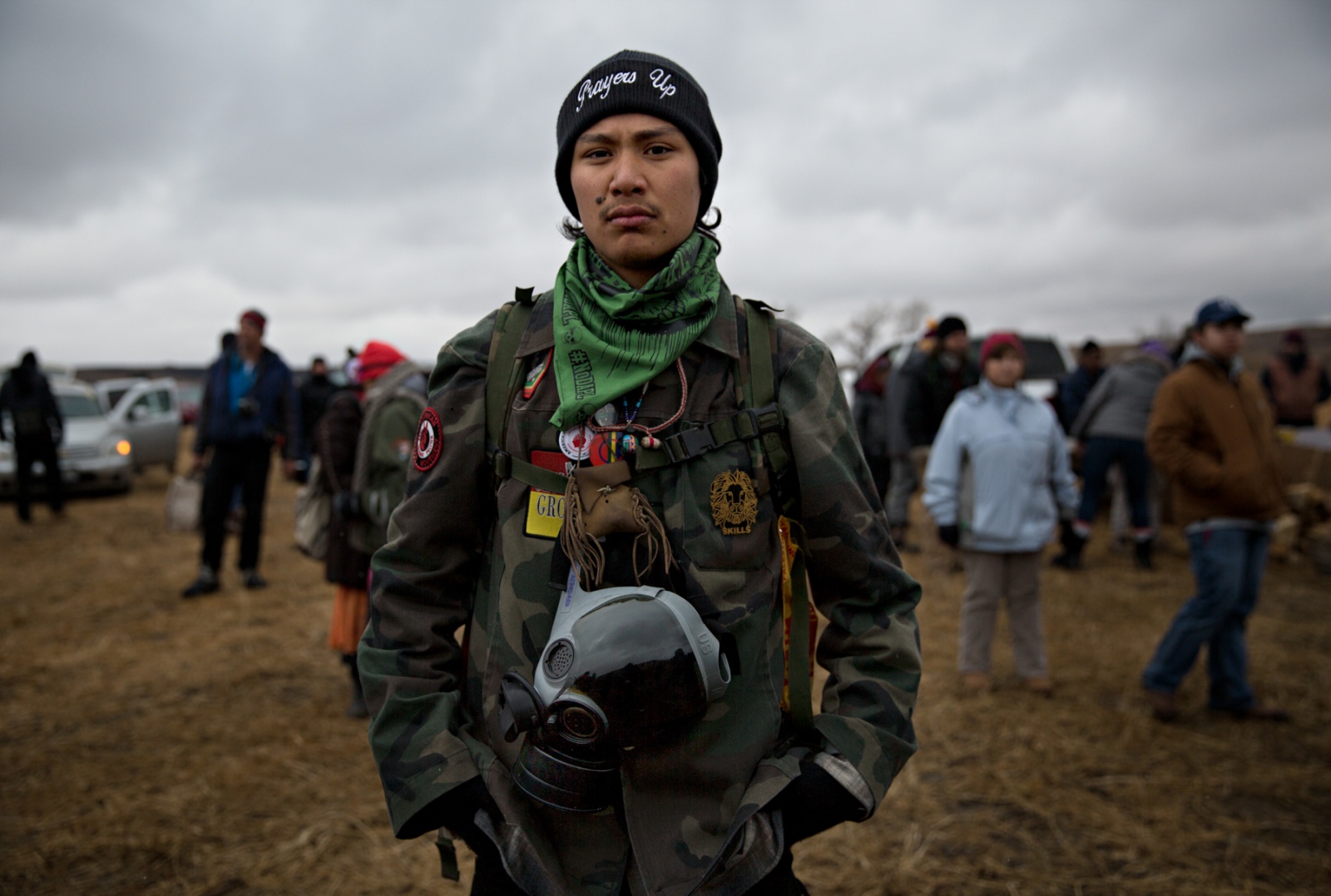 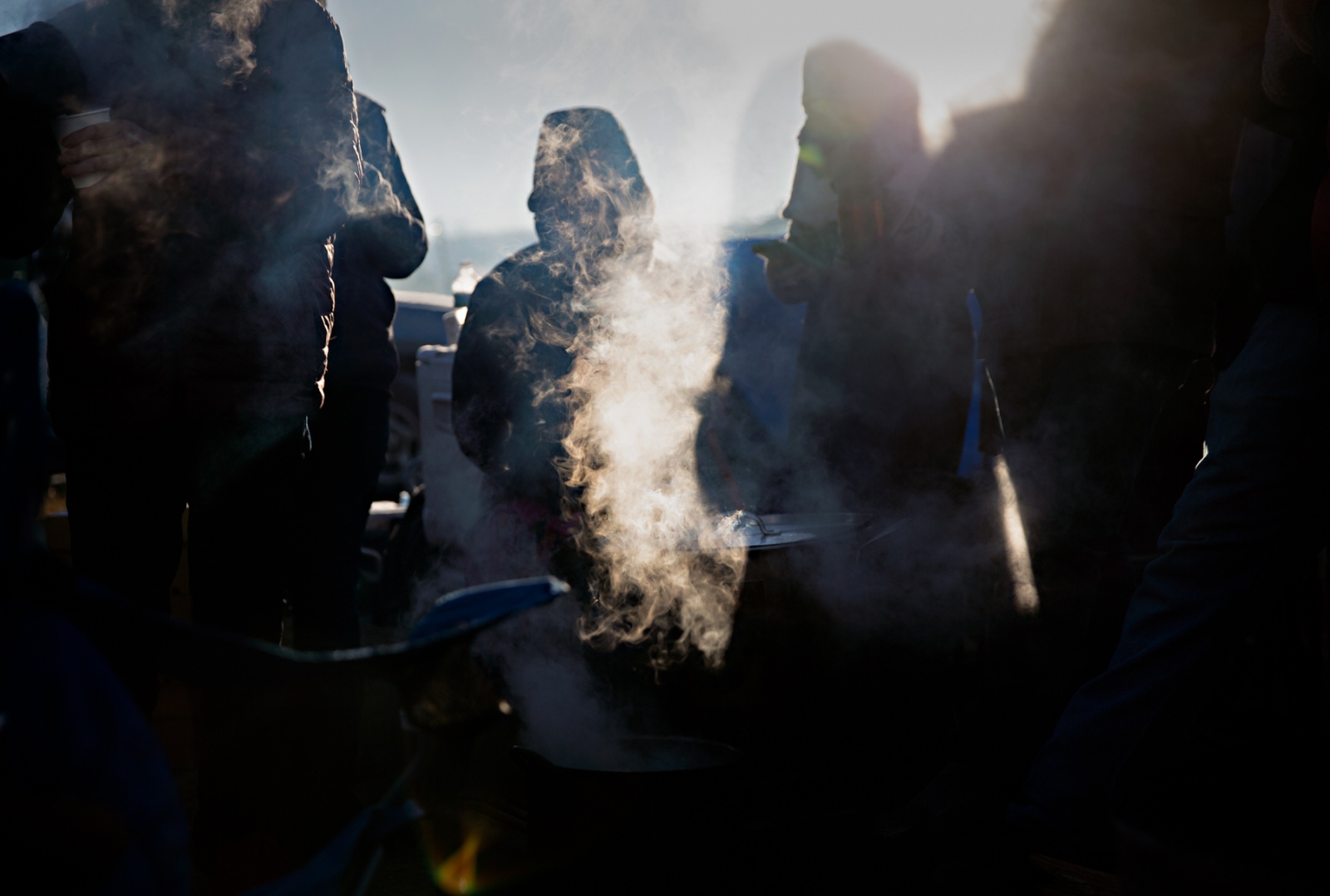 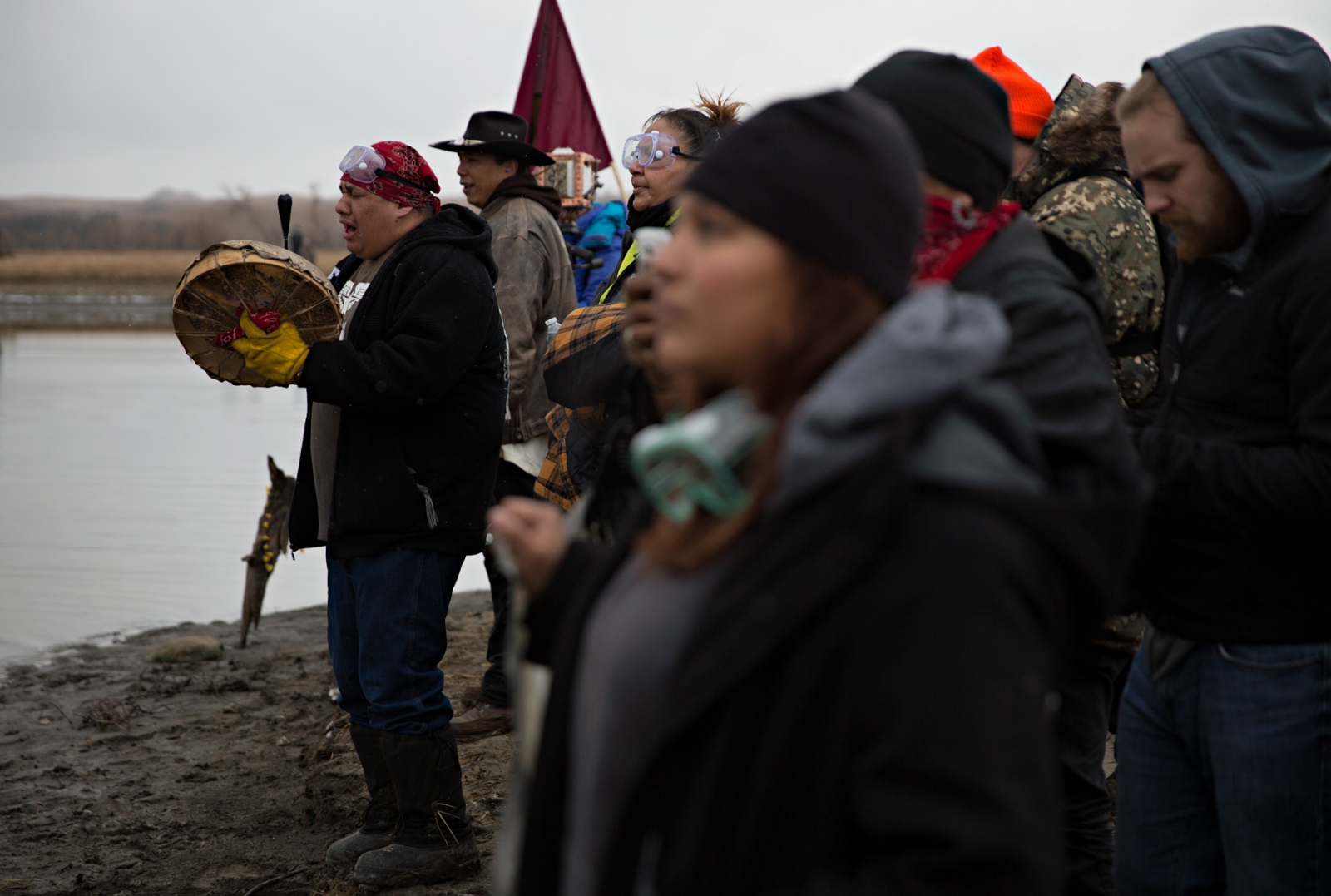 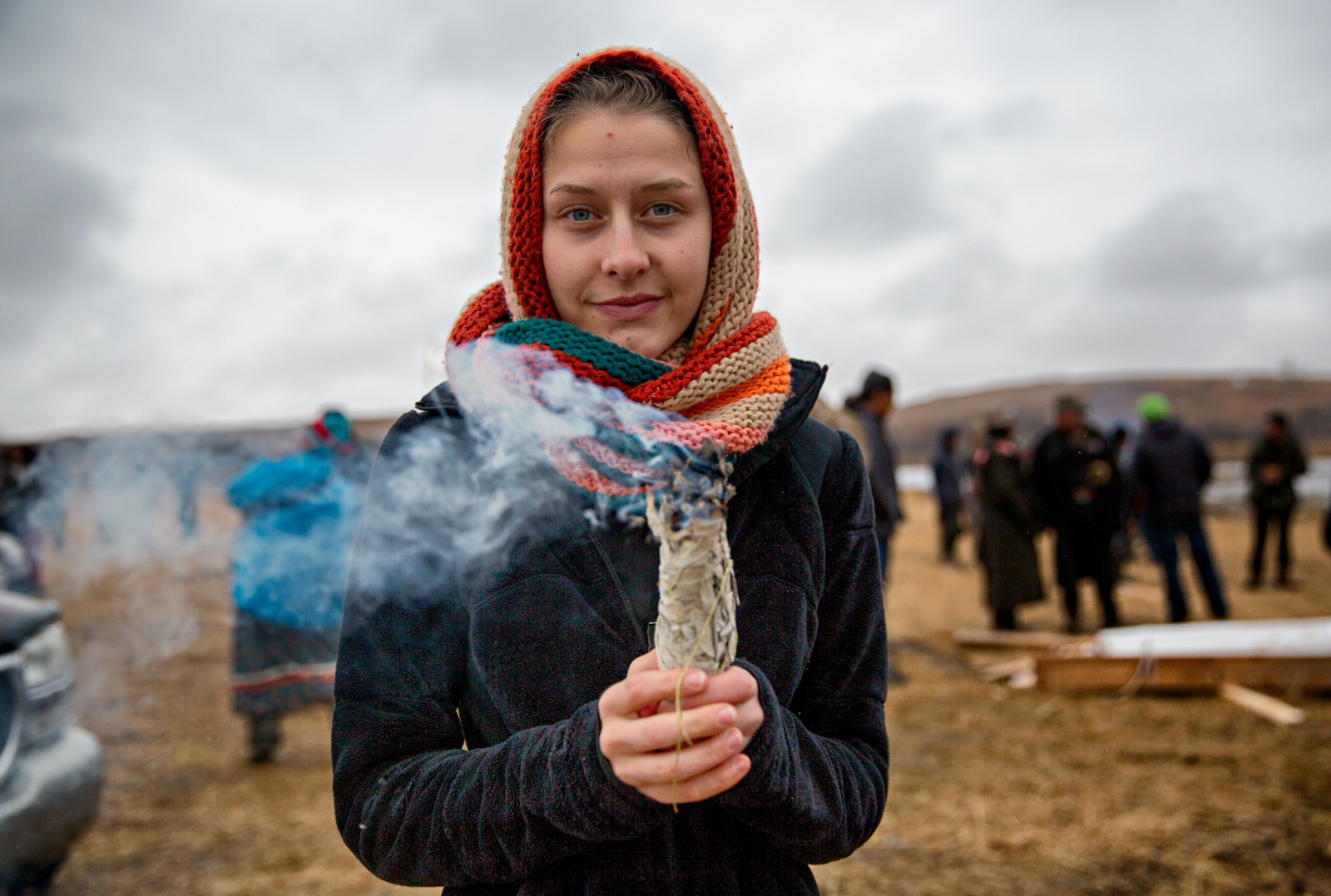 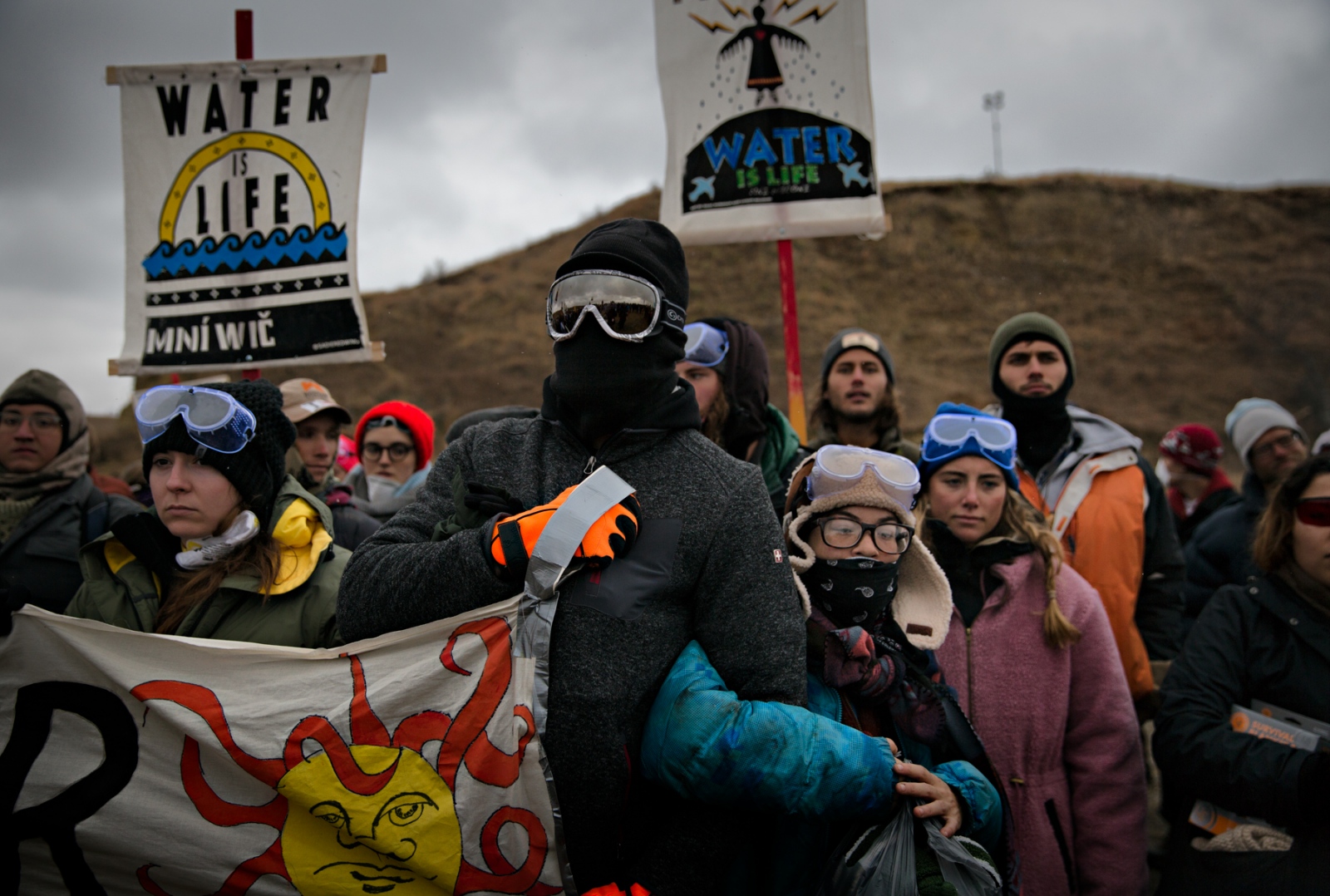 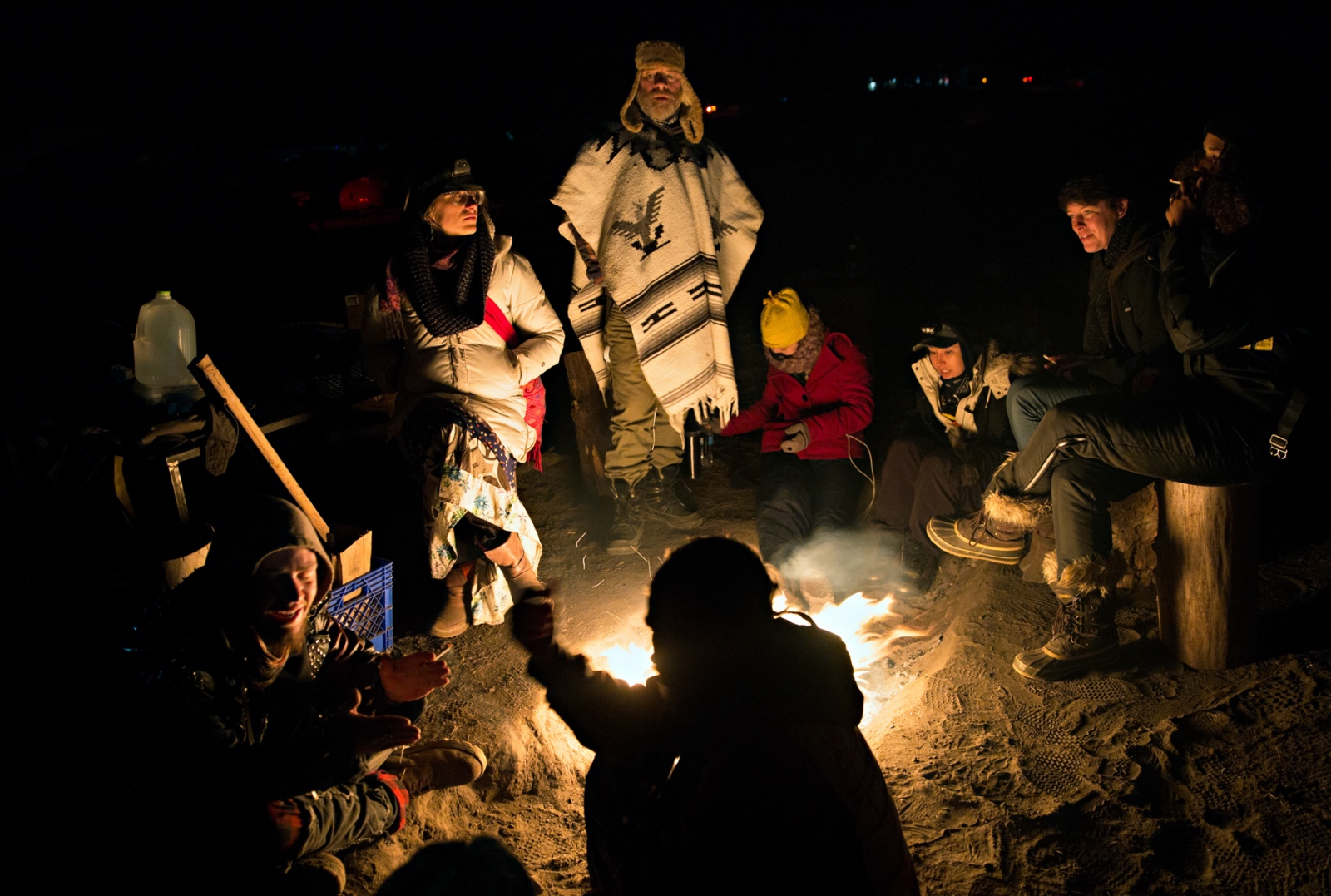 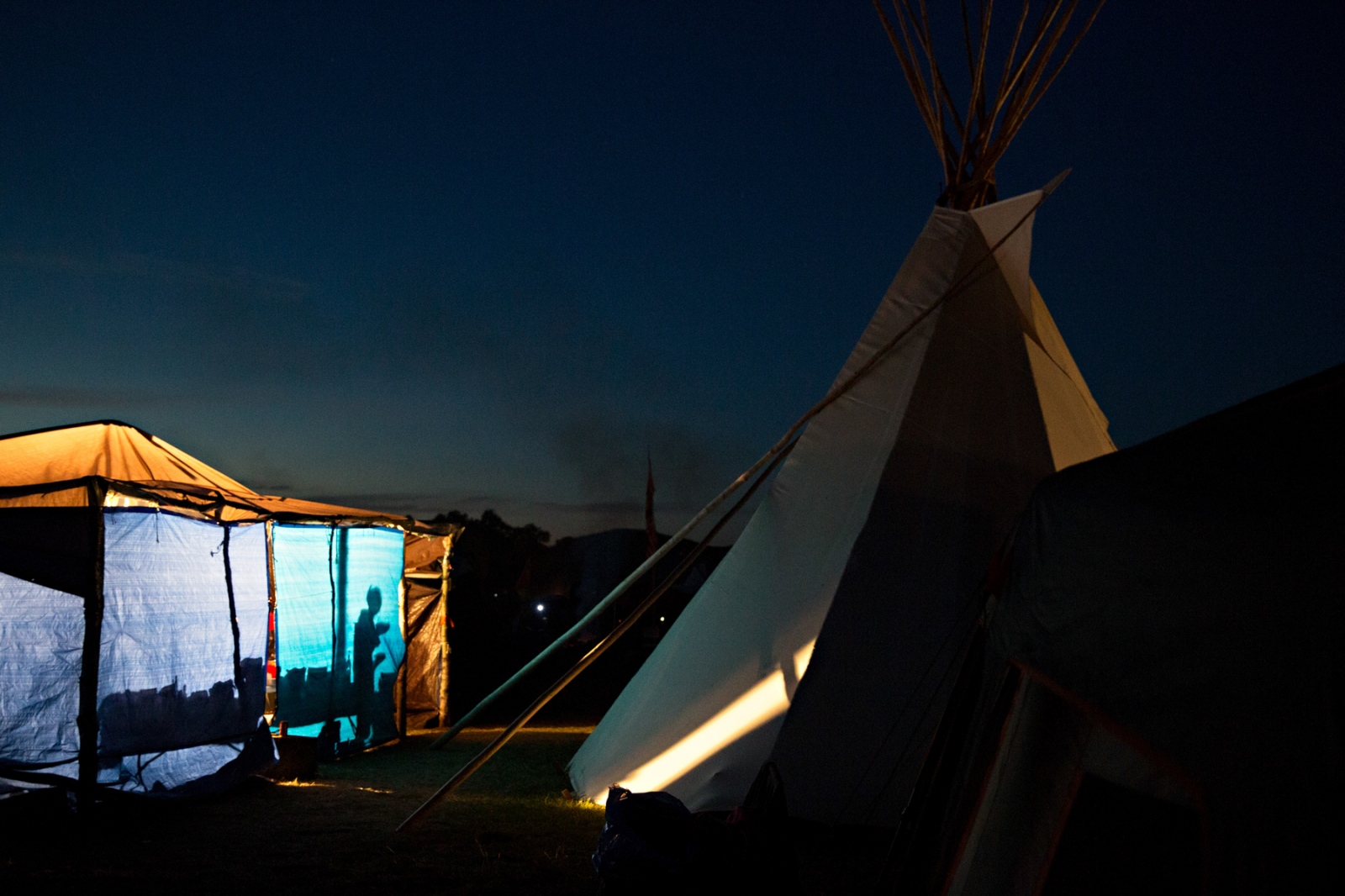 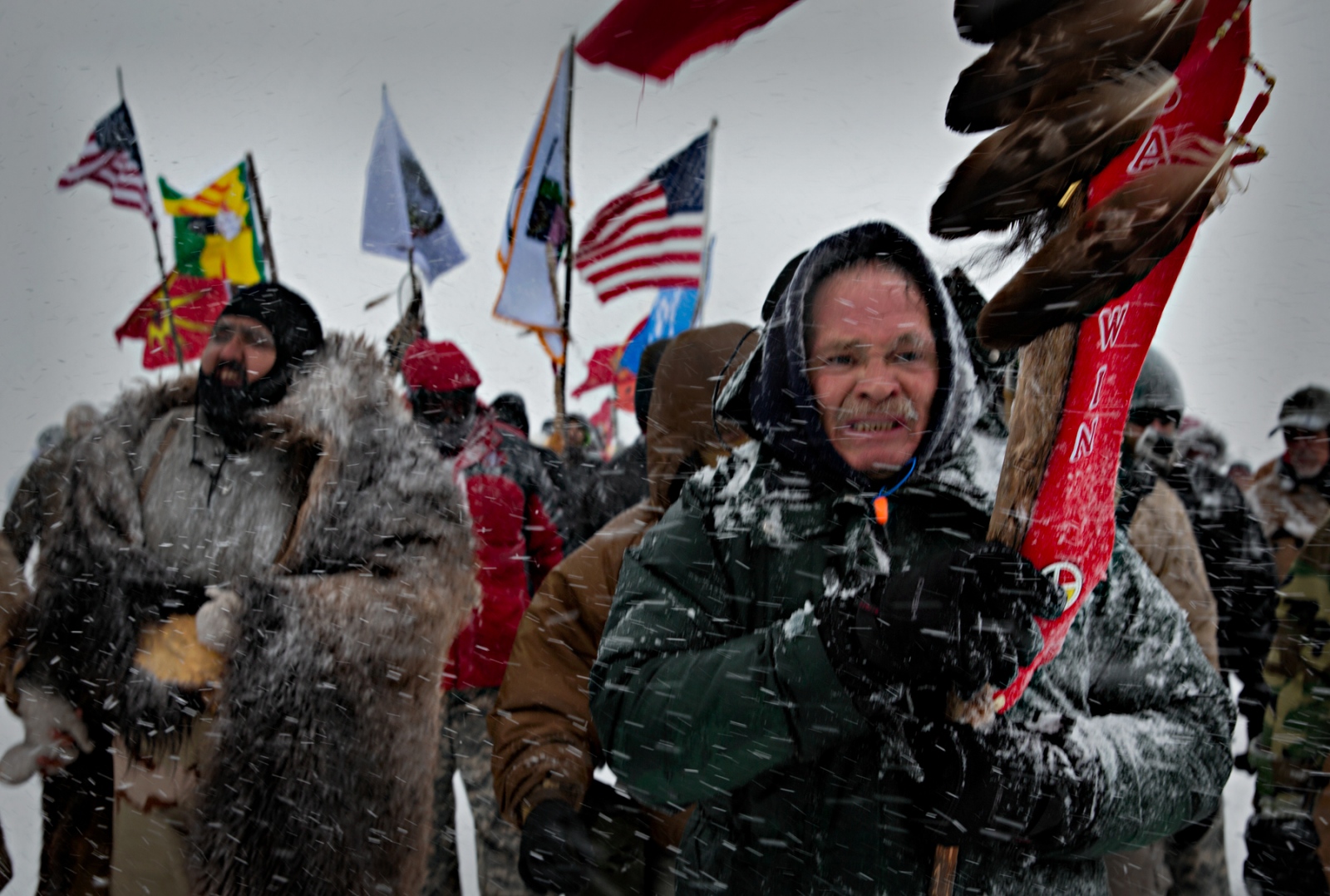 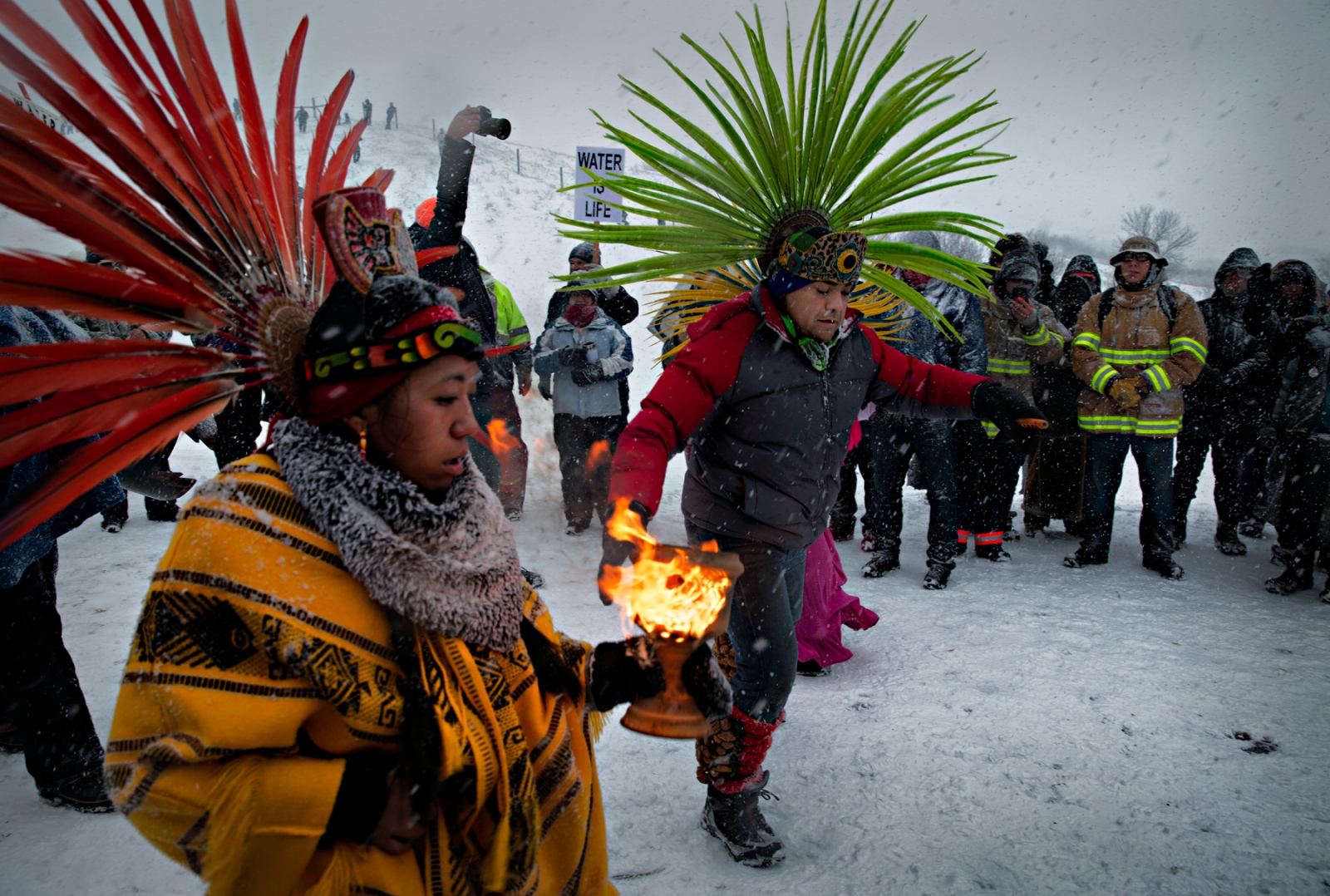 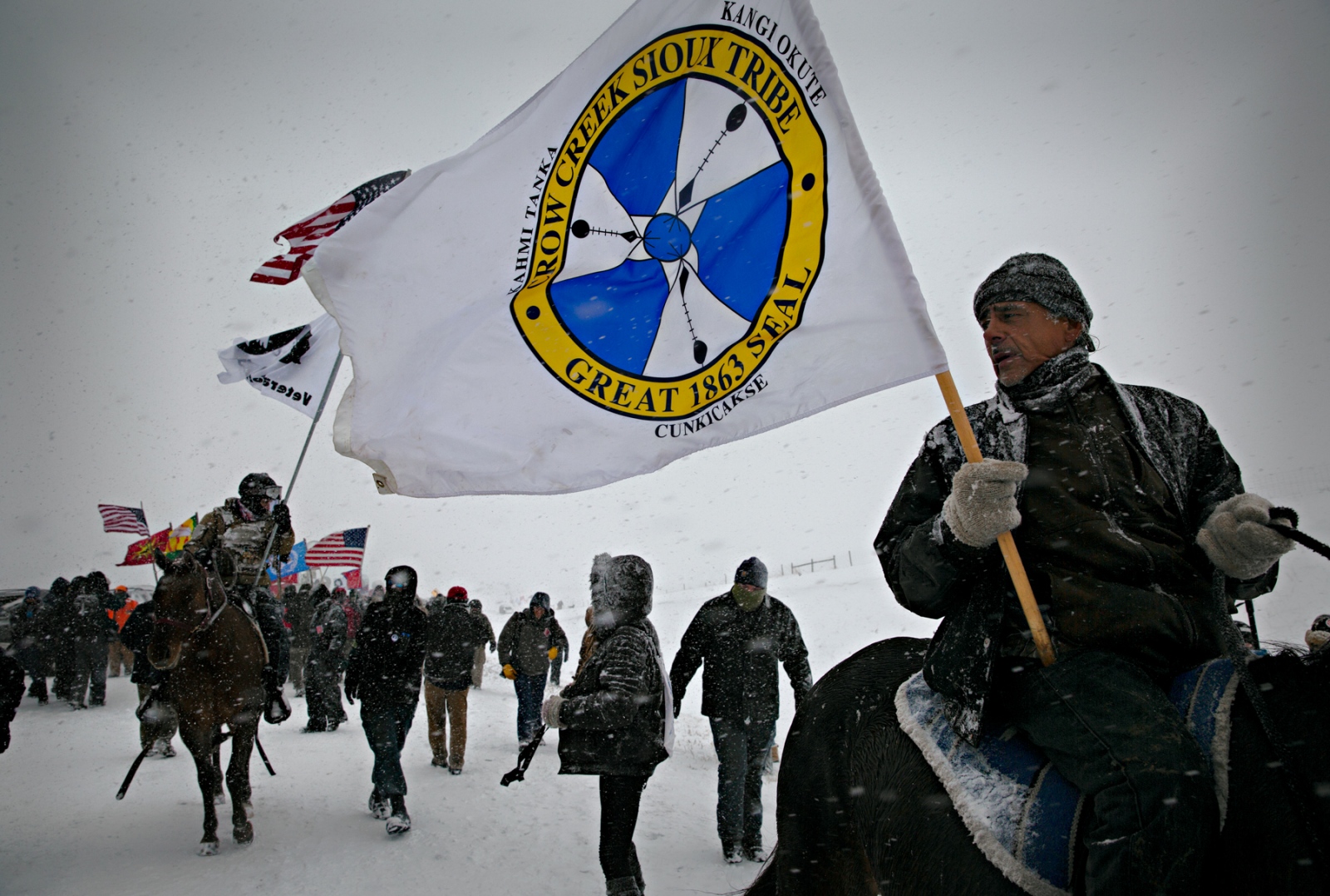 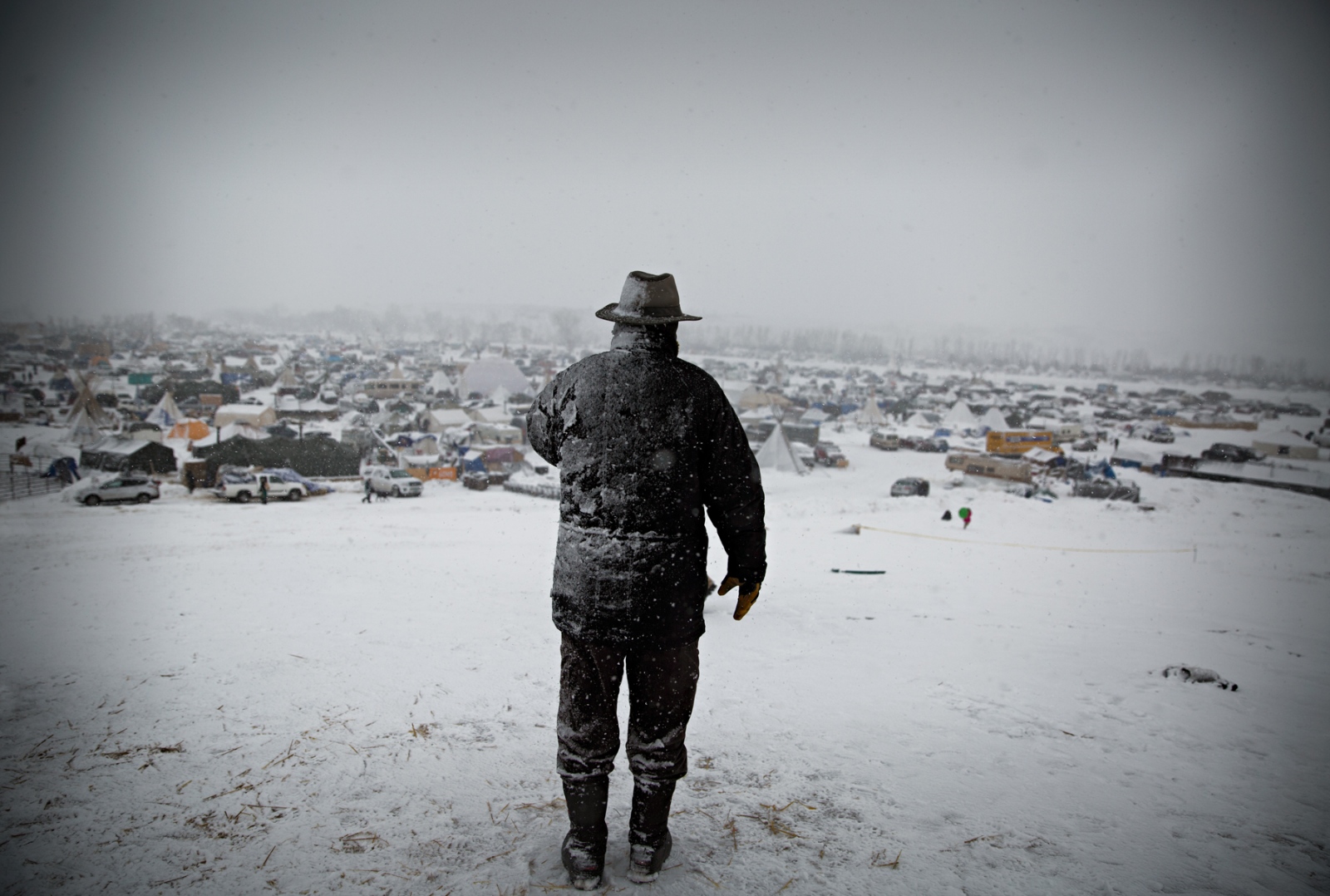 A man overlooks the Camp during a heavy snow blizzard on a December morning... READ ON
A man overlooks the Camp during a heavy snow blizzard on a December morning when US Military veterans joined the Protectors at the Oceti Sakowin Camp. The veterans had vowed to provide a line of defense against the military style actions of the local and federal law enforcement that had surrounded the Camp.
They are not protestors. In fact, they make sure you understand that they do not like to be referred to as “protestors”. They see themselves as “protectors.” Protectors of the human right to clean water because: “Water is Life.”
Spearheaded by the Standing Rock Sioux Nation, more than 125 Native American tribes and various supporters have gathered in a camp of peace and prayer or the Oceti Sakowin Camp, to prevent the further construction of the Dakota Access Pipe Line (DAPL), the destruction of their sacred burial grounds and sites, and to protect their river and underground water from inevitable seepage that will occur once the “Black Snake” is allowed to continue its destructive way across the Land.
DAPL will transport millions of gallons of crude oil across 50 counties and 4 States (North Dakota, South Dakota, Iowa, and Illinois) in 1171 miles of pipe at a cost of $3.8 Billion. The Pipeline crossing the Missouri and Cannonball River cuts through land that is sacred to the Sioux of the Standing Rock Reservation. Once they put out a call for help, tribes from all over the United States responded, sometimes putting aside long standing rivalries, and came to show their support in a historic gathering. There has not been such a gathering of Tribes in close to 100 years.
Aside from the threat to sacred land, the pipeline also threatens the environment. When (and not if - if history of pipelines is of any lesson) the pipeline breaks or leaks, the drinking water from the Missouri River would be immediately contaminated.
The Army Corps of Engineers has denied the easement necessary for DAPL to dig and cross under the Missouri river. A victory the Native Tribes take with a grain of salt. With Donald Trump winning the Presidential Elections, the chance of having an ally in the White House is zero. If Mr. Trump's statements are any indication and the Protectors are now prepared for a long and hard battles to come. This is not over."¨"¨This stand off is one of the most important stories of the past several decades as it touches many sensitive subjects: the oil industry, the environment, climate change, Native American life and sovereignty, and federal laws and treaties.
Update: Following the election of President Donald Trump, the new Administration overruled the denial and allowed the pipeline to proceed. In February 2017, the law enforcement in riot gear and automatic weapons entered the Oceti Sakowin Camp and forced all resident to leave and arrested a number of persons. The Oceti Sakowin Camp was cleared and closed. As they exited, the tribes engaged in ritual burning of their tipples and tents and whatever they could not take with them.