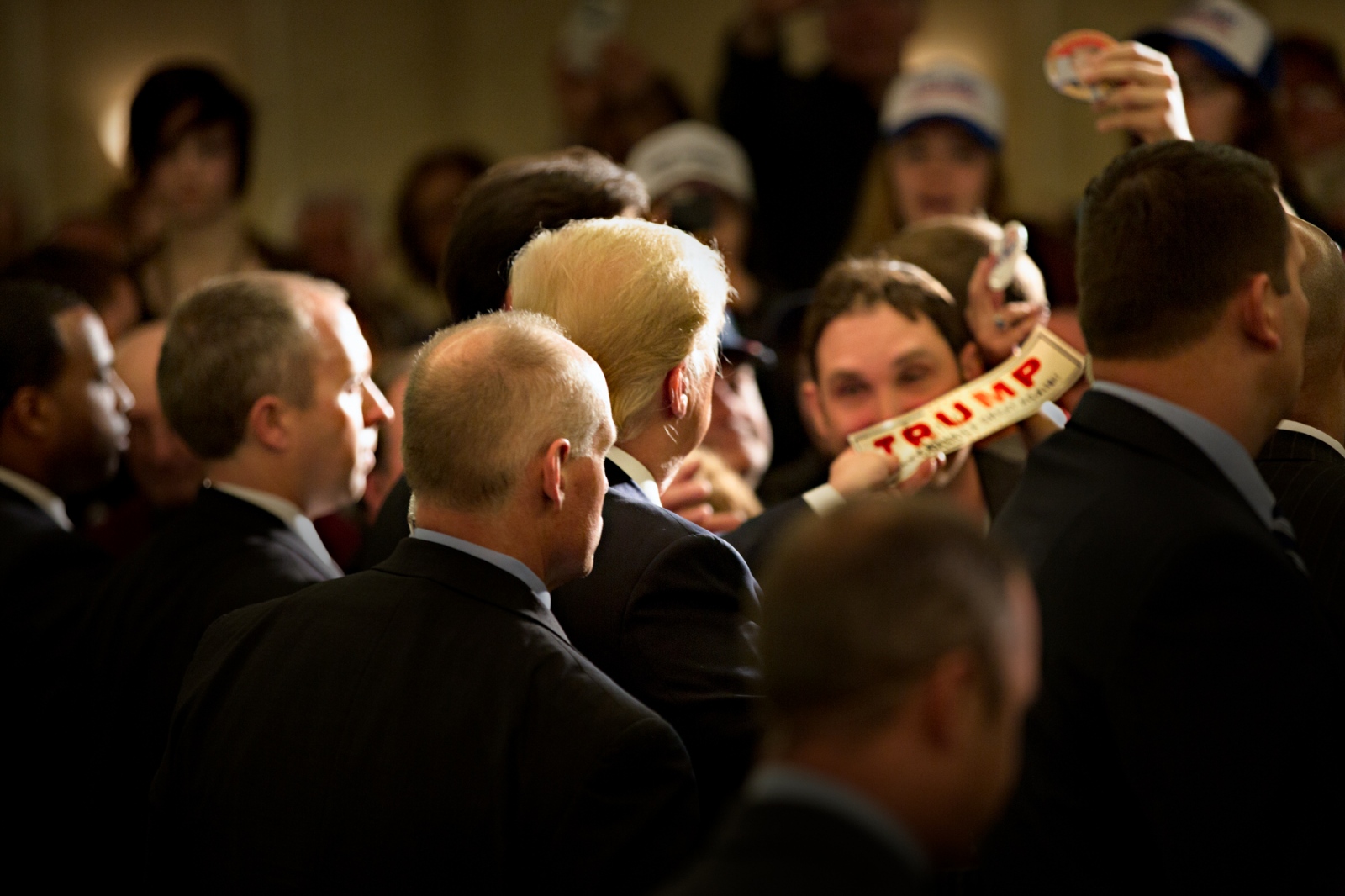 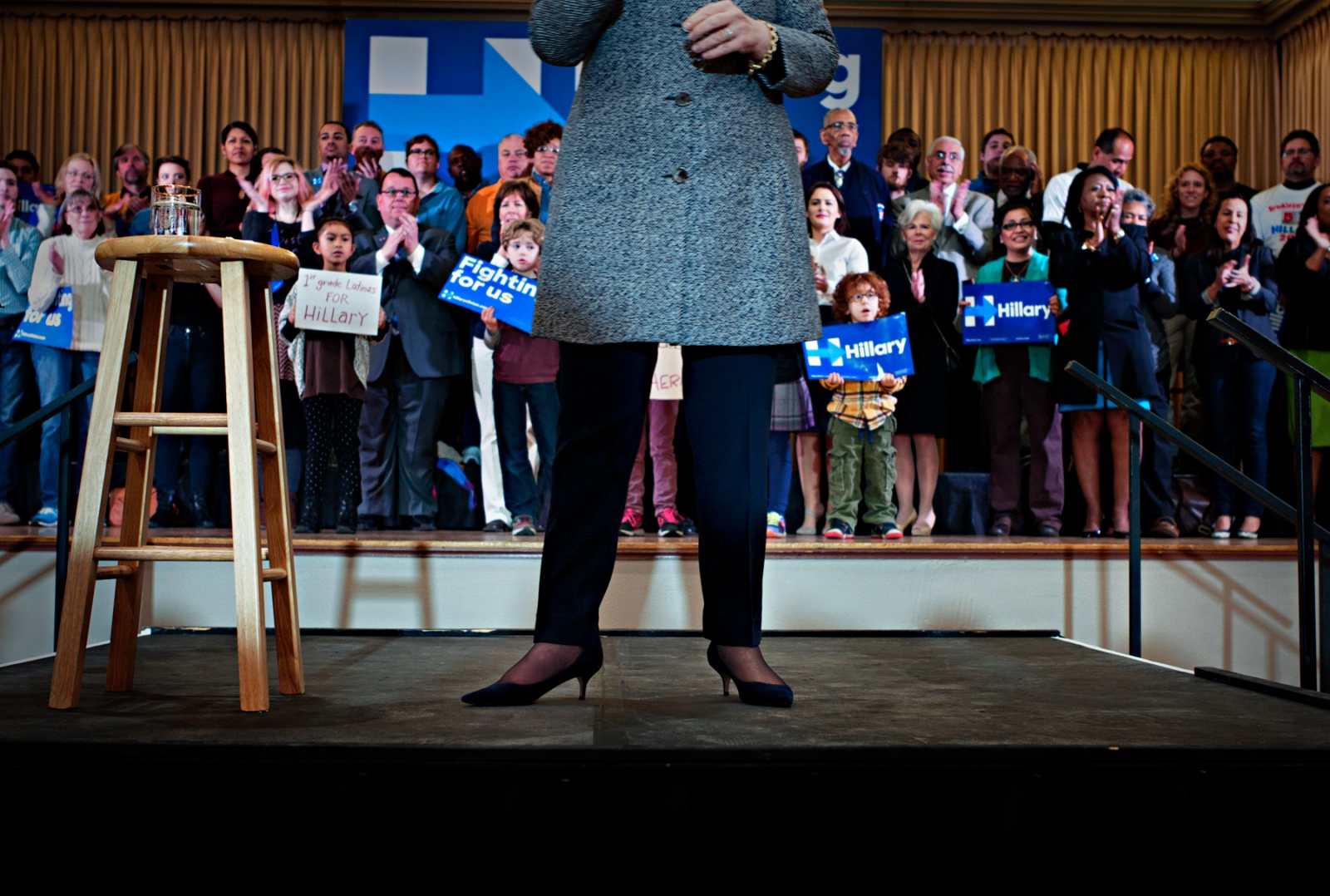 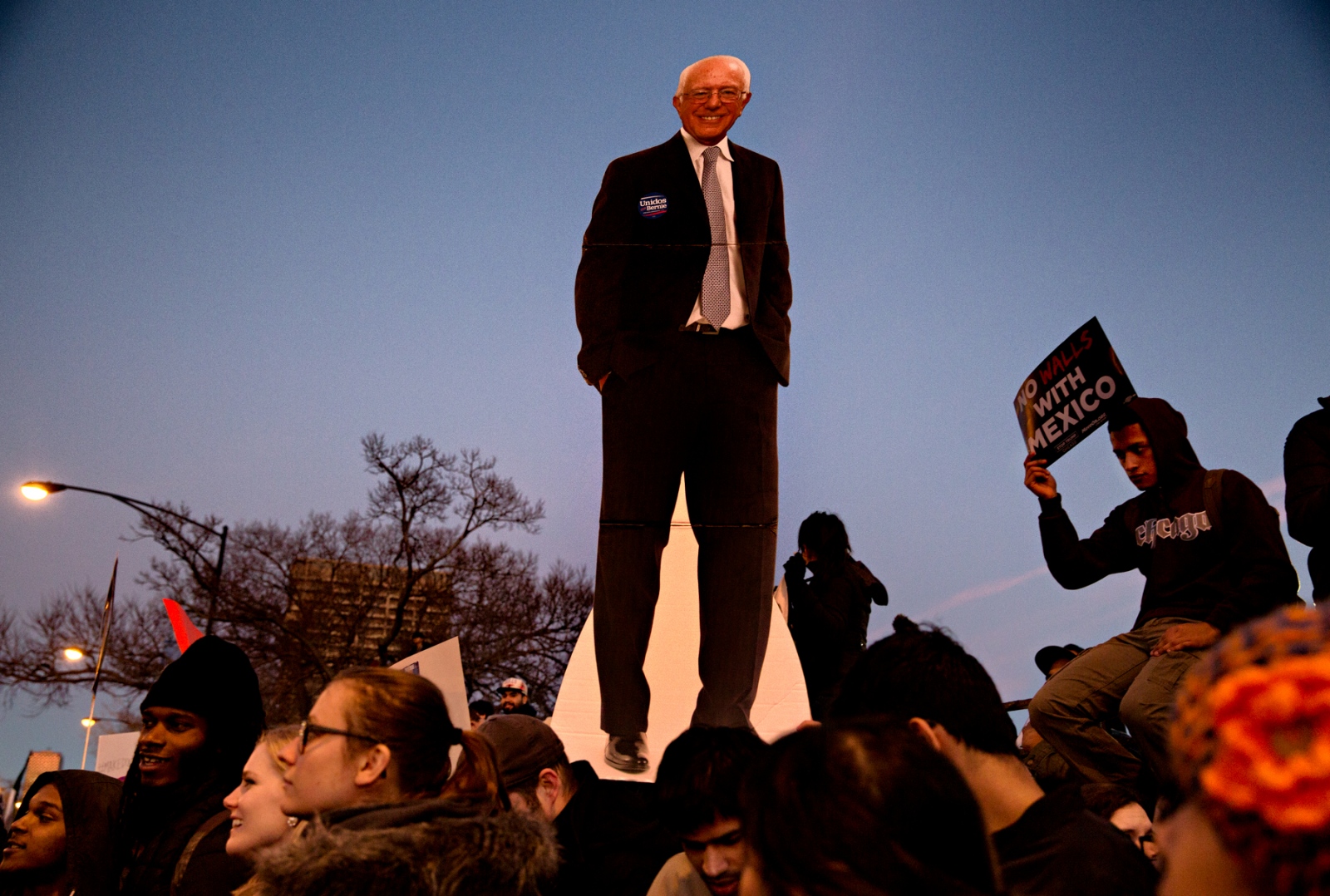 March 11, 2016 - Chicago, Illinois -Â Chicago protestors brandish signs and a cardboard cutout of Bernie Sanders in front of the University of Illinois's Pavilion where Donald Trump had scheduled an appearance. Due to the intensity of the protests and the UIC student's infiltration of the Pavilion, concerned about his securityÂ Trump cancelled his appearance. 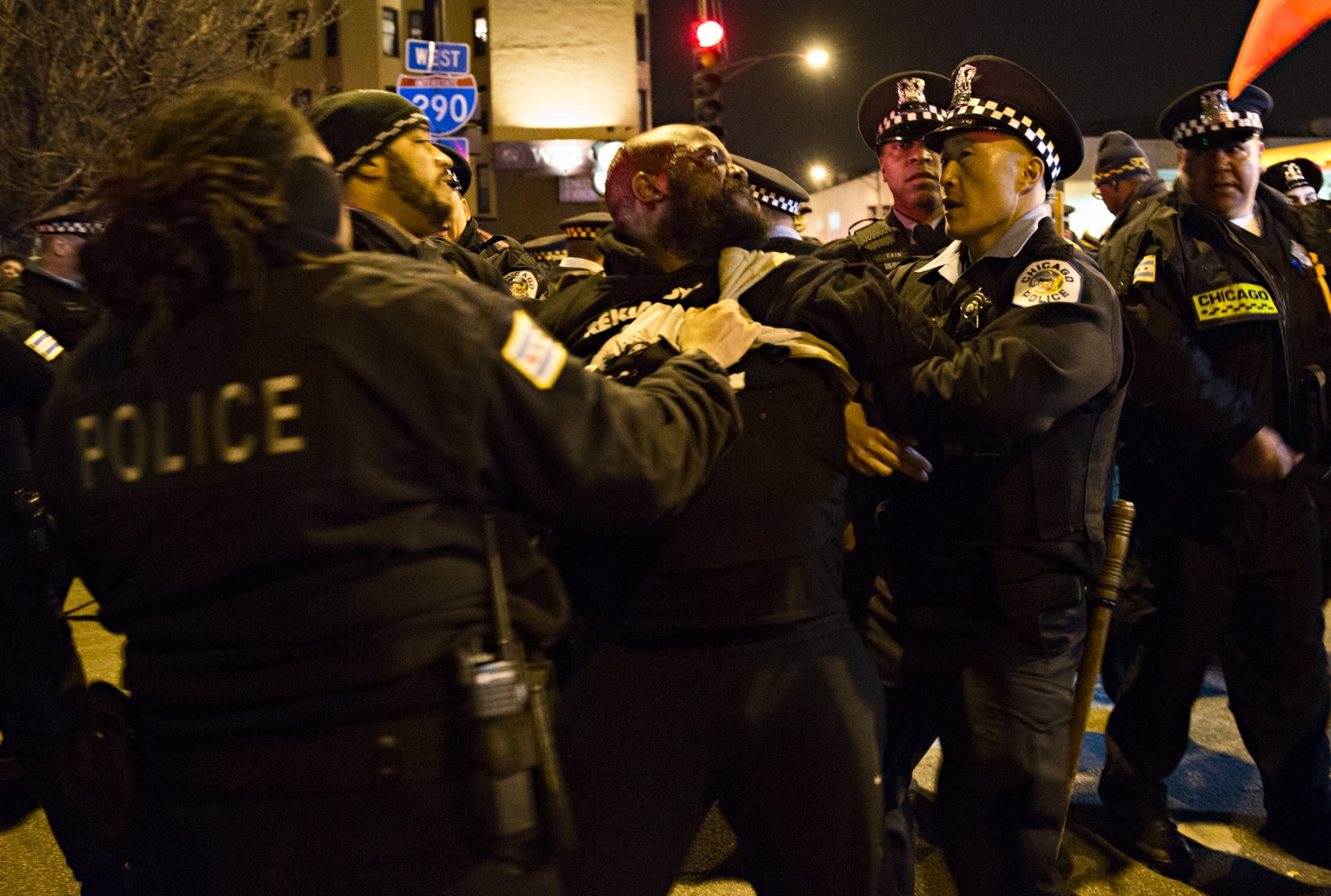 March 11, 2016 - Chicago, Illinois -Â An anti-Trump protestor is arrested by the Chicago Police Department following unrest resulting from the planned appearance of Donald Trump in Chicago.Â Due to the intensity of the protests and the UIC students' infiltration of the Pavilion, concerned about his securityÂ Trump cancelled his appearance. 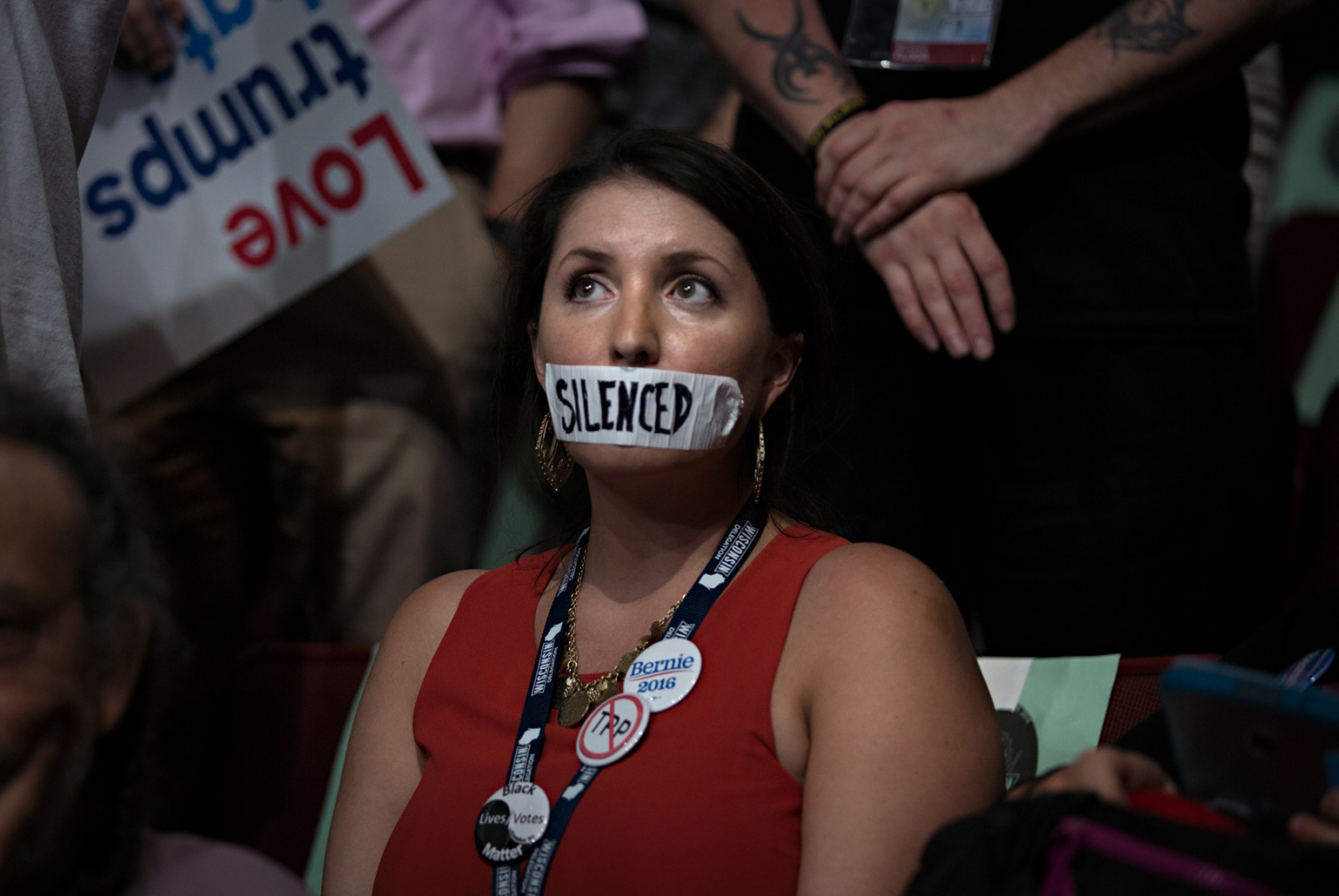 July 25, 2016 - Philadelphia, Pennsylvania - Angie Aker, a Bernie Sanders delegate from Kenosha Wisconsin, wears a tape over her mouth with the words: "silenced" on it. Her action caused irritation in the Clinton camp, which viewed it as a petulant act when Hillary supporters drowned the chants in favor of Sanders. Her act came to symbolize the staunch support of the Sanders Camp and their decision not to support Hillary Clinton's nomination for the Presidency of the United States. 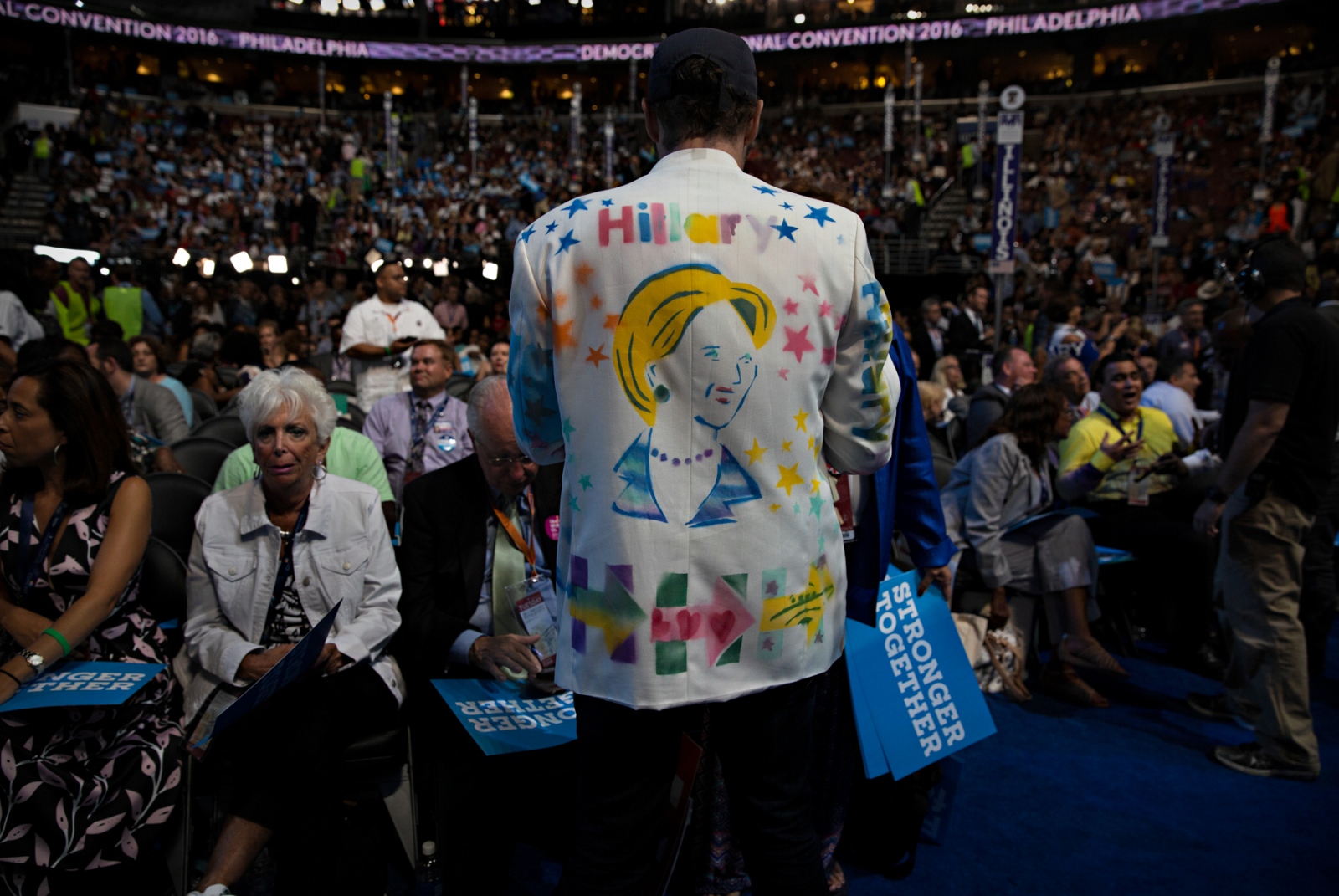 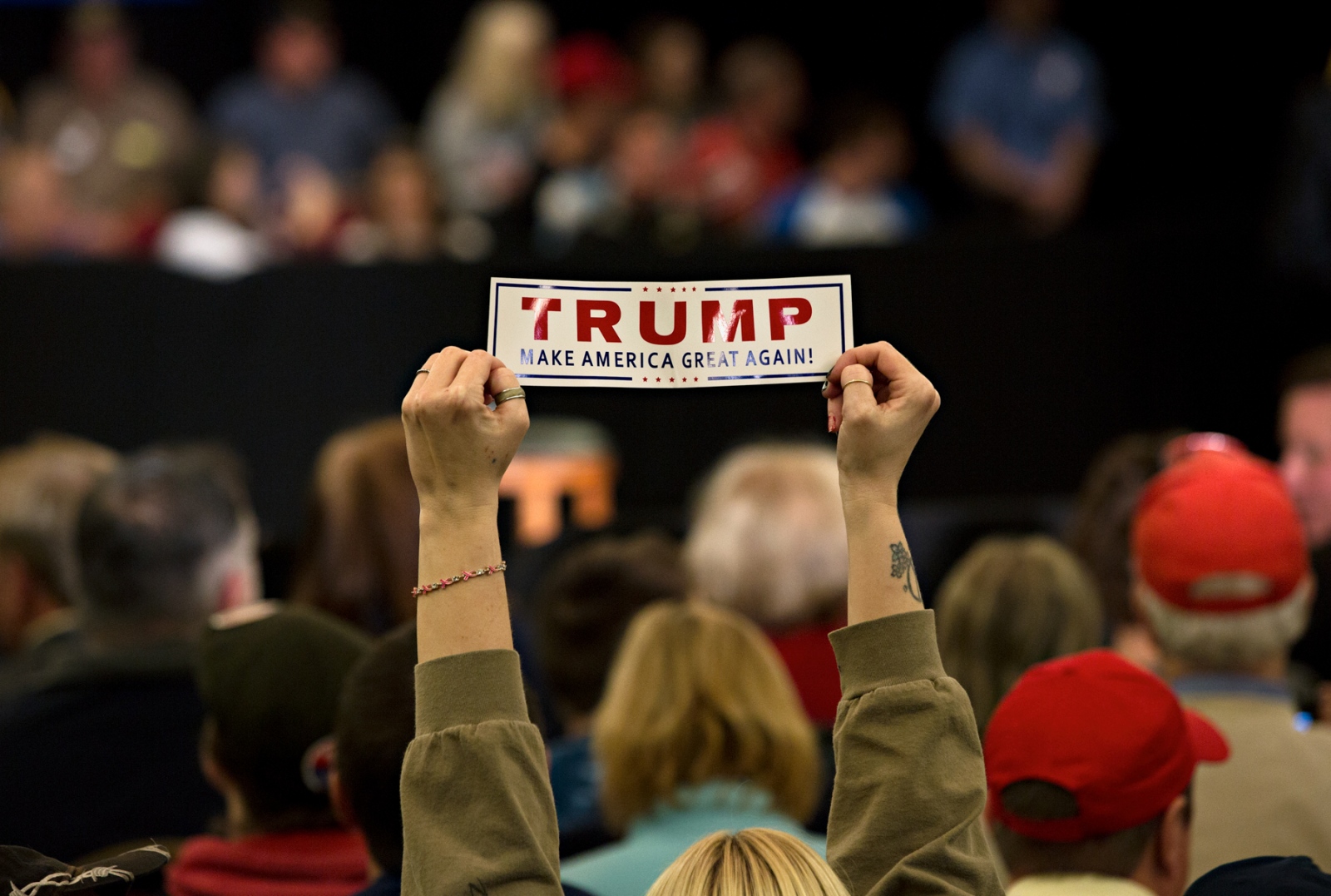 March 30, 2016 - Appleton, Wisconsin -Â A supporter of Donald Trump brandishes a Trump bumper sticker during a rally in Appleton, Wisconsin. Trump asked his supporters to turn around and look at the "lying media" while he berated the media's coverage if his presidential run. He criticized the media for not interviewing his supporters and only covering negative news about him.Â 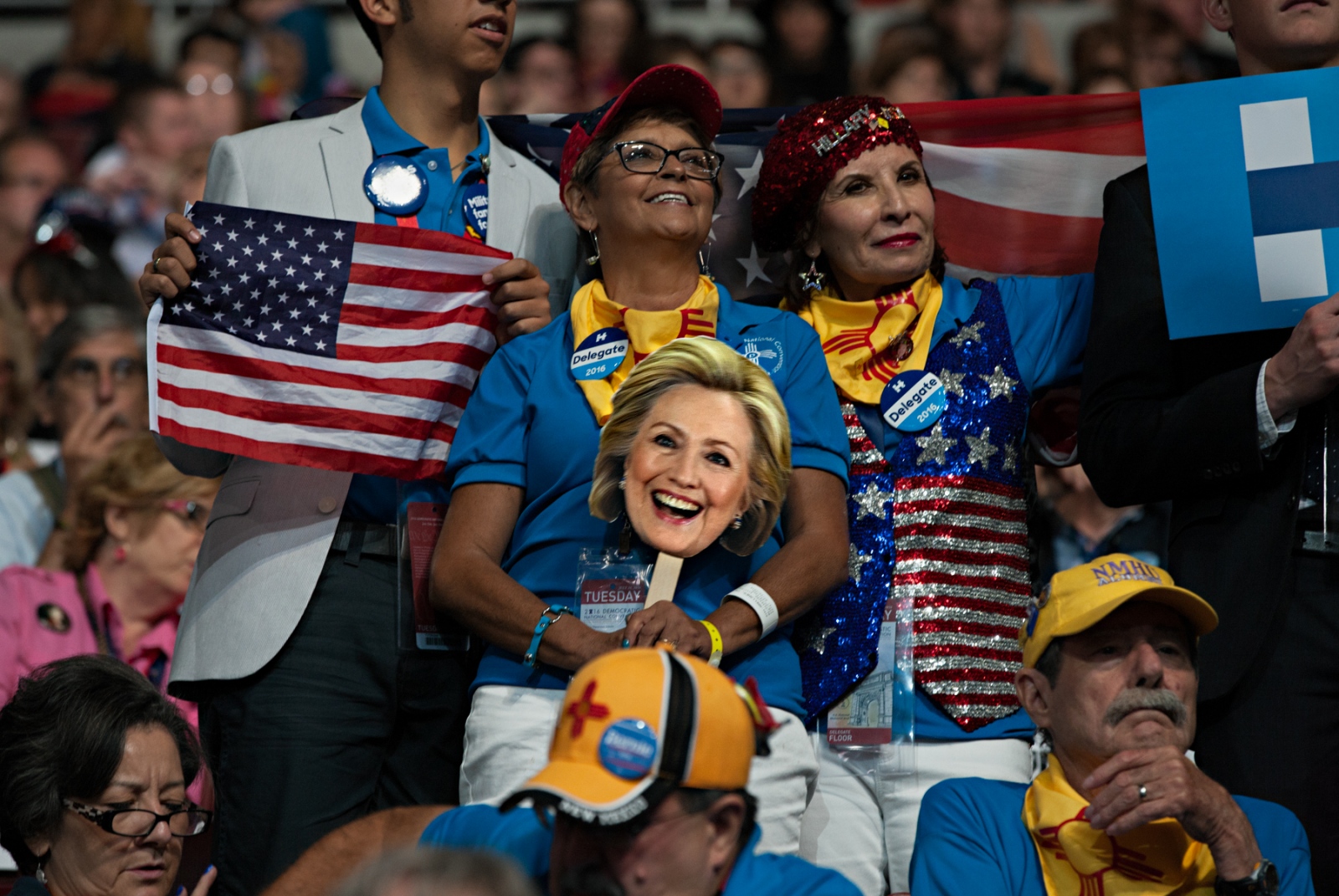 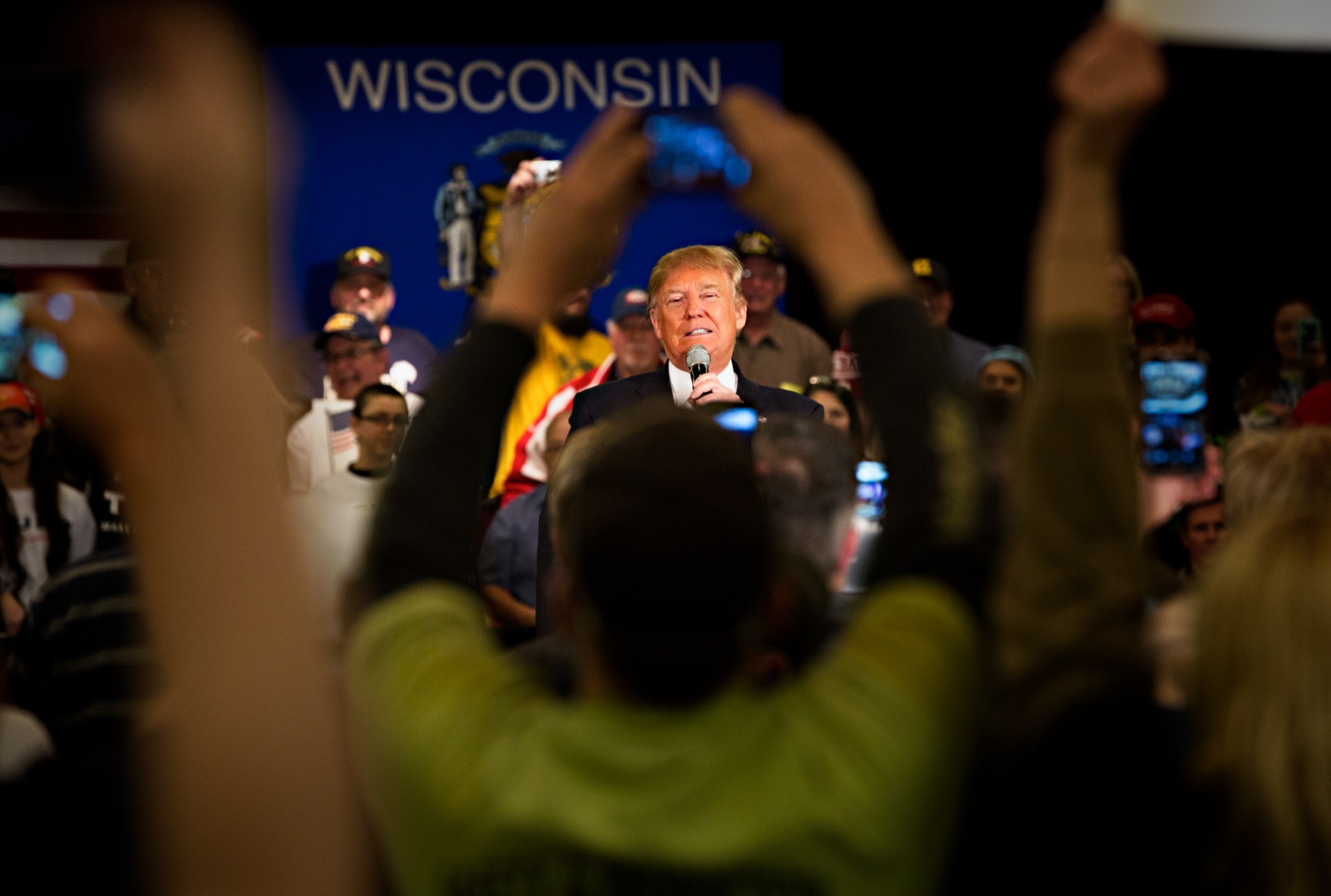 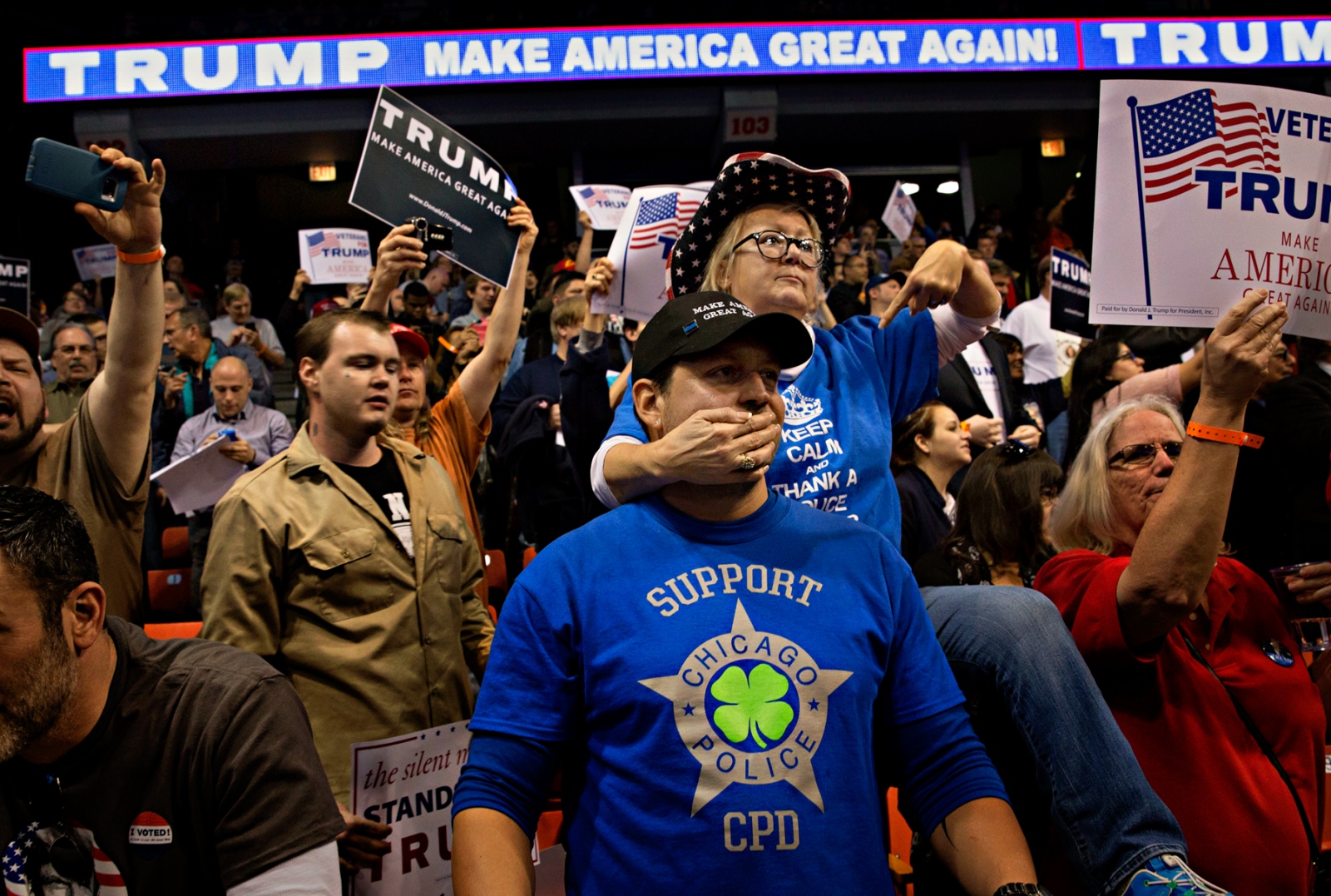 March 11, 2016 - Chicago, Illinois -Â A group of Chicago Police Department officers and their family attended a rally planned by Donald Trump in the University of Illinois at Chicago. Before it became apparent the UIC students along with members of Black Lives Matter organization had filled the Pavilion with their supporters, the CPD officers engaged in a verbal assault with anti-Trump protestors inside the Pavilion before the protestors were escorted out.Â 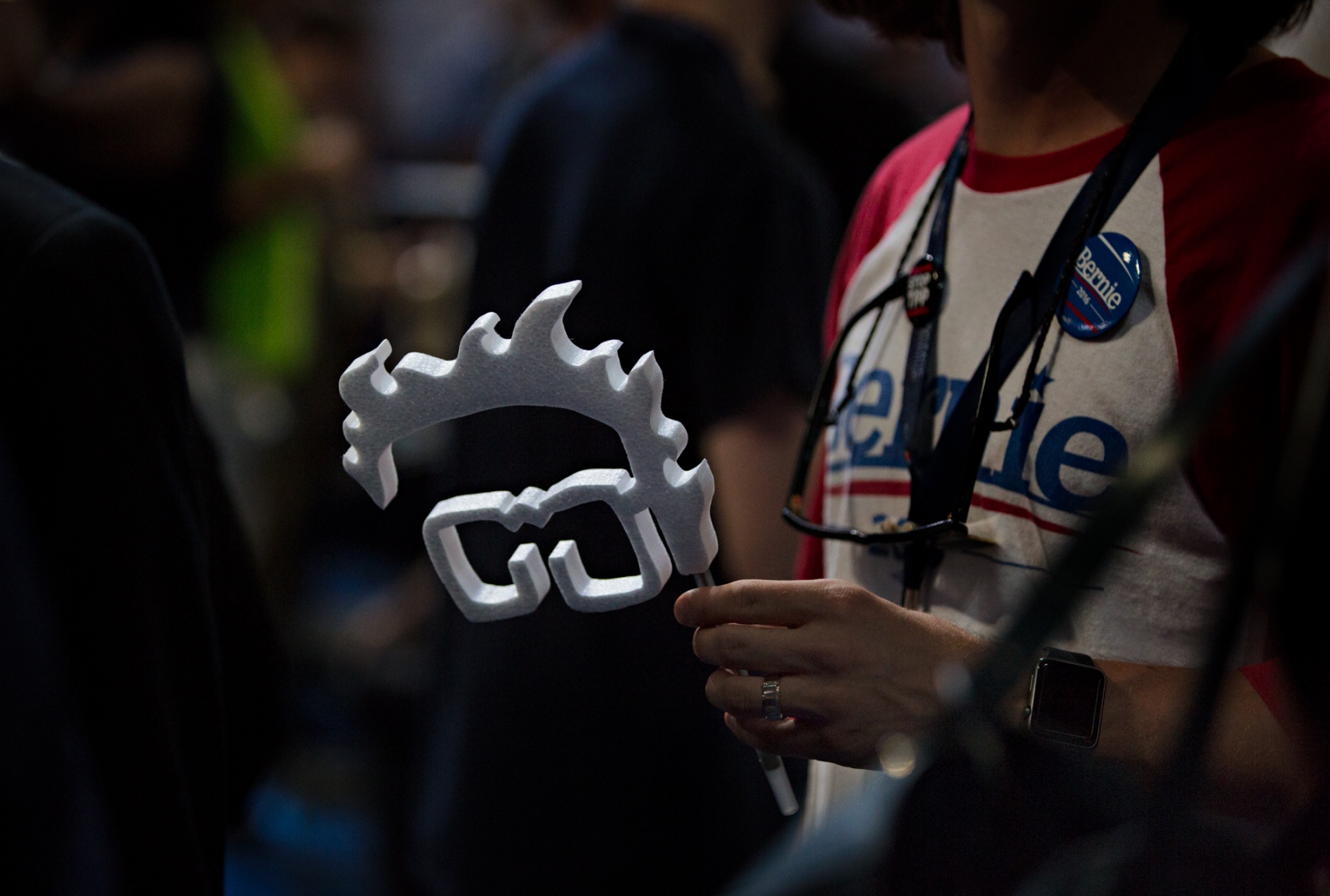 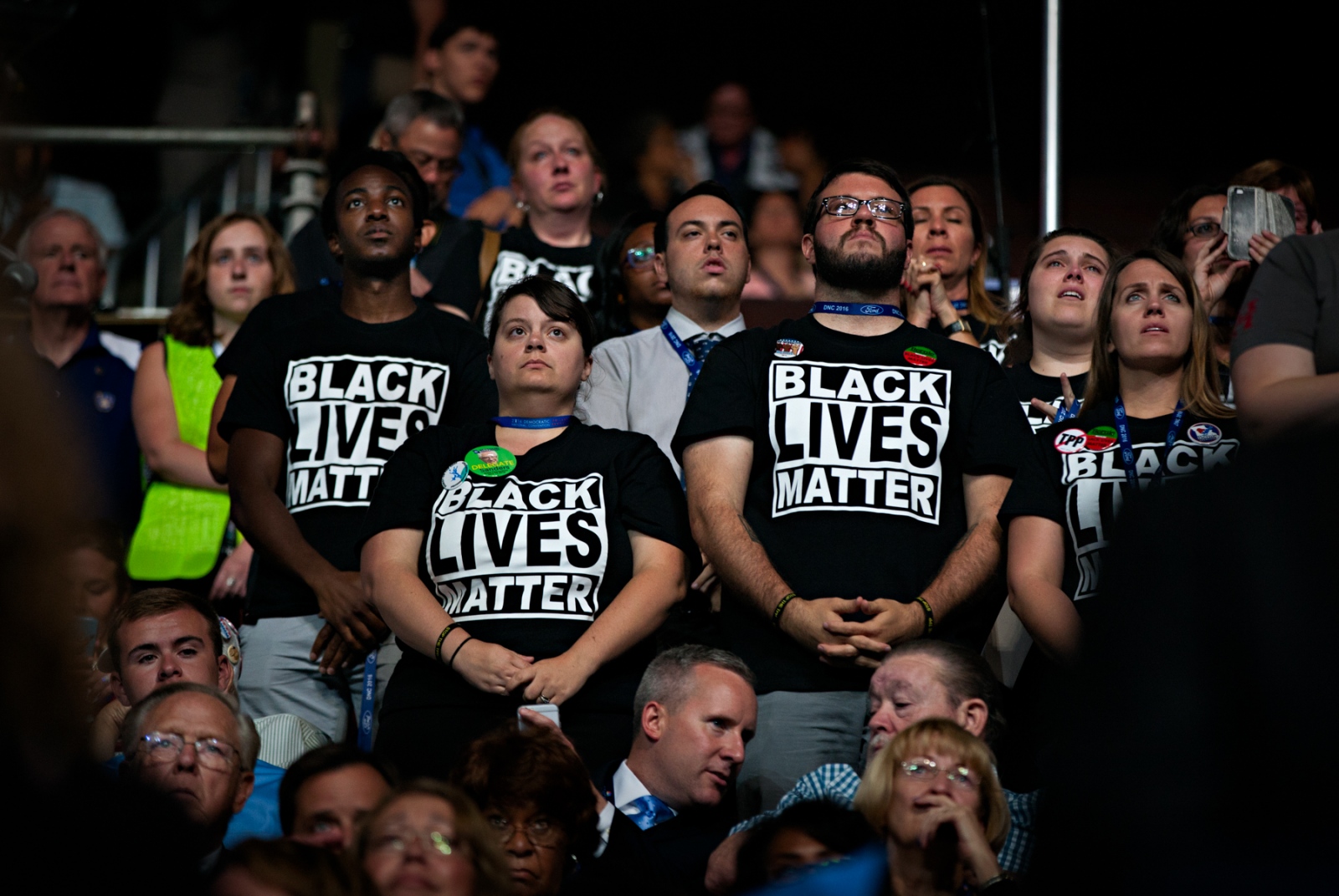 July 26, 2016 - Philadelphia, Pennsylvania - Black Lives Matter supporters stand in defiance during the Democratic National Convention when it became clear that Hillary Clinton was going to be the nominee. Bernie Sander supporters believed that the DNC was actively supporting Hillary Clinton in contravention of the DNC rules to remain neutral in the process. 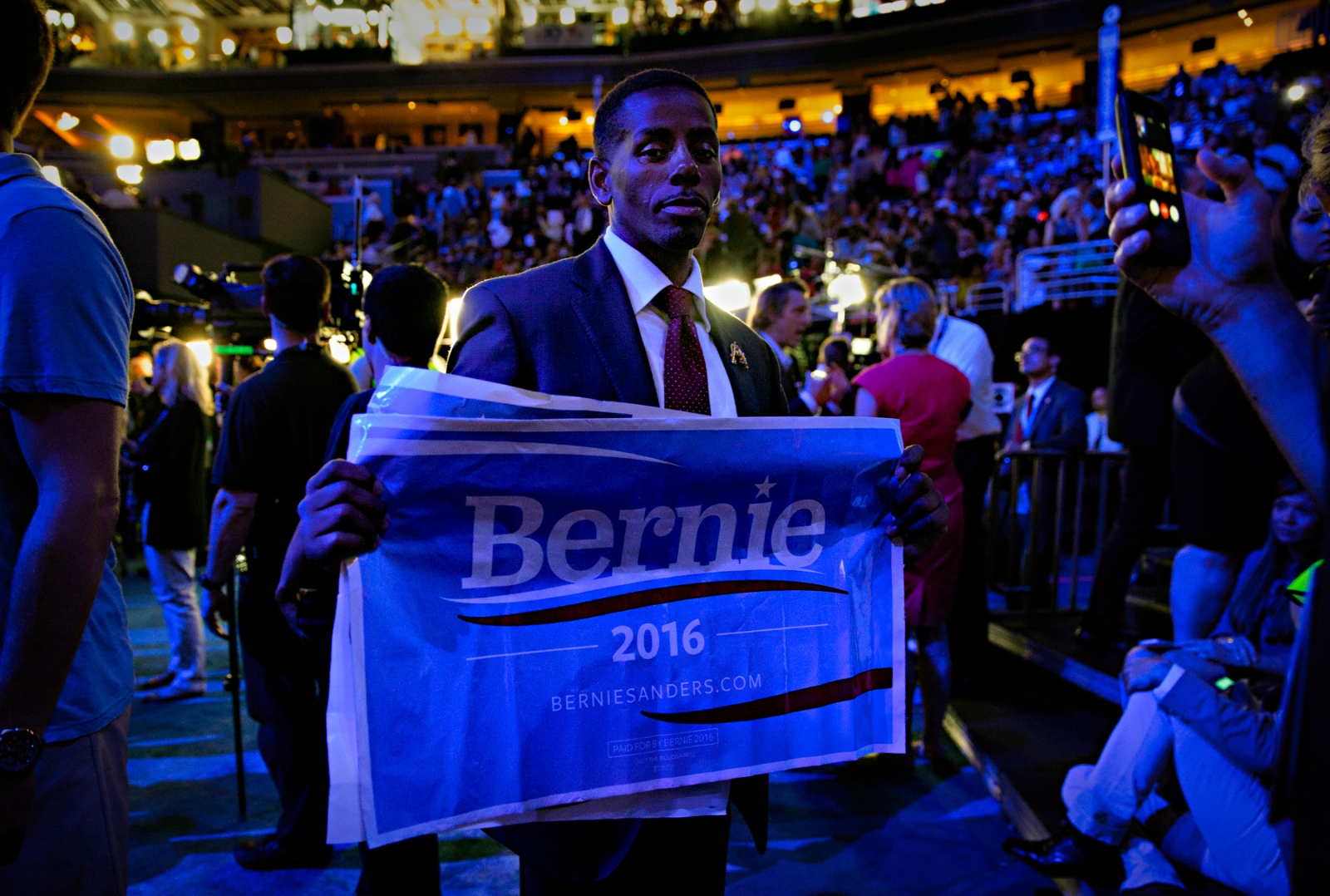 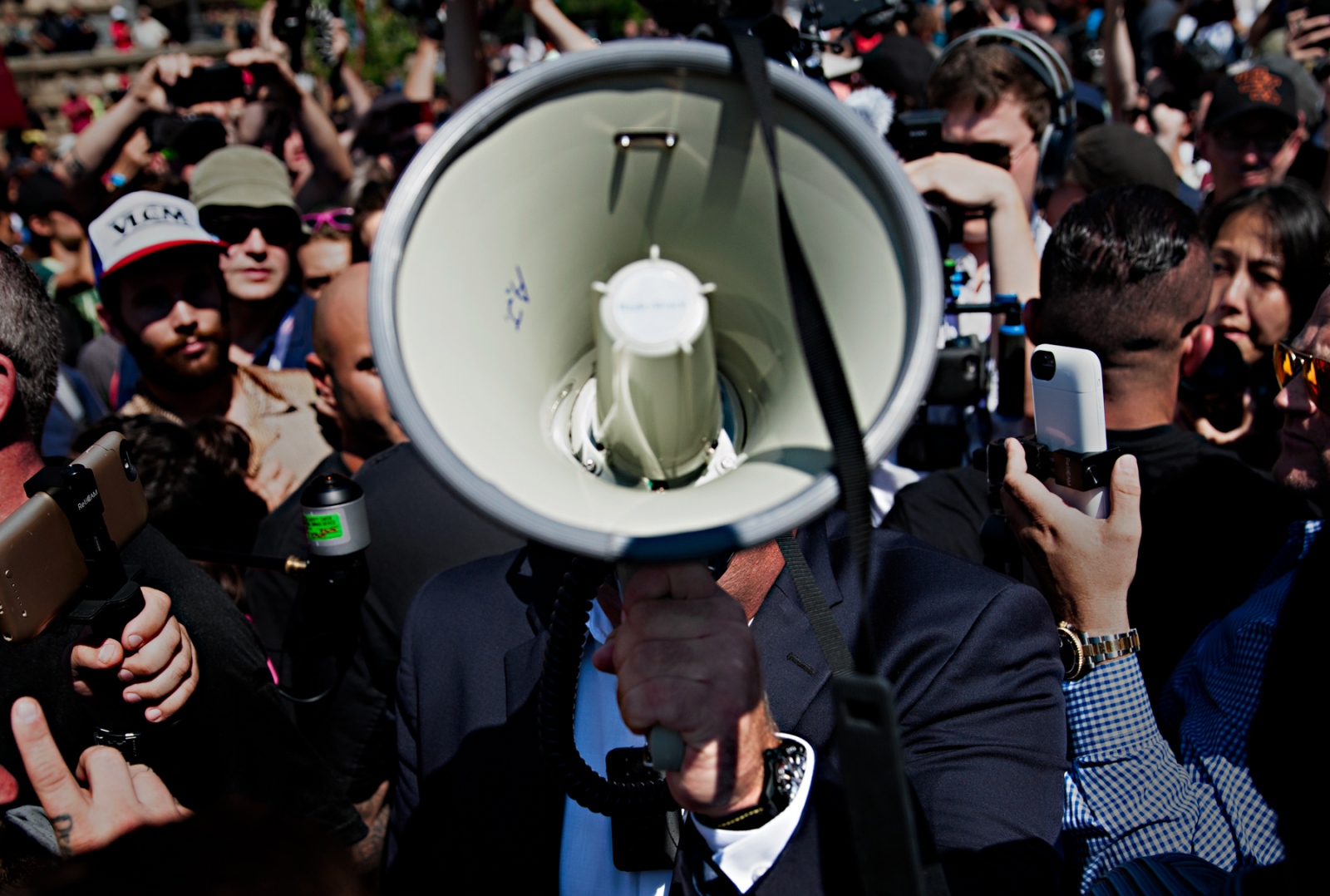 July 19, 2016 - Cleveland, Ohio - The right wing extremist radio host Alex Jones appeared outside the Republican National Convention in Cleveland, Ohio. He used his bullhorn to incite the crowed which was mostly made of anti-Trump and anti-GOP protestors. Soon he was surrounded by angry individuals and protestors hurling verbal assault at him. Was it not for the swift action of the Cleveland Police Department separating the protestors and Mr. Jones, he likely would have been assaulted and battered. 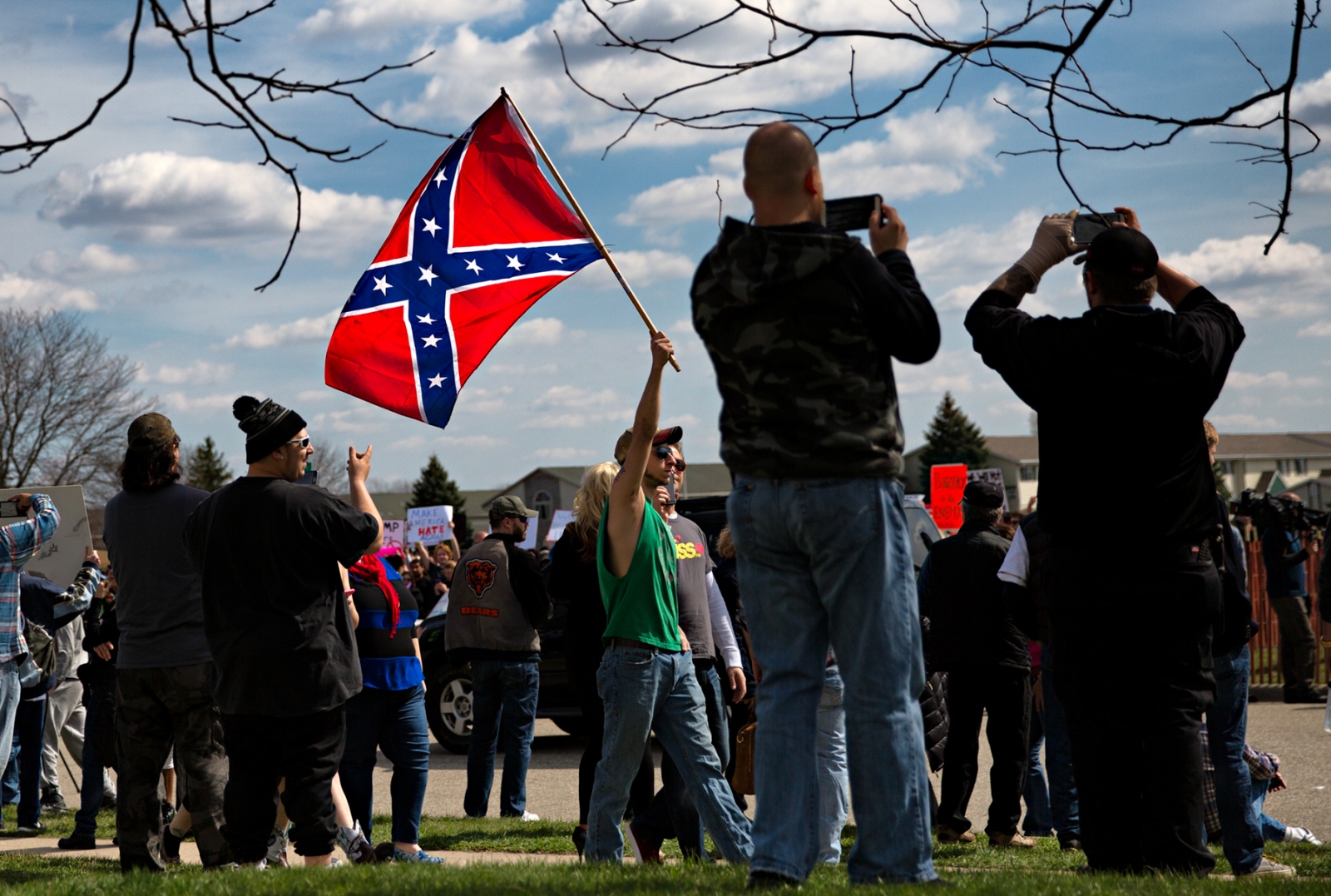 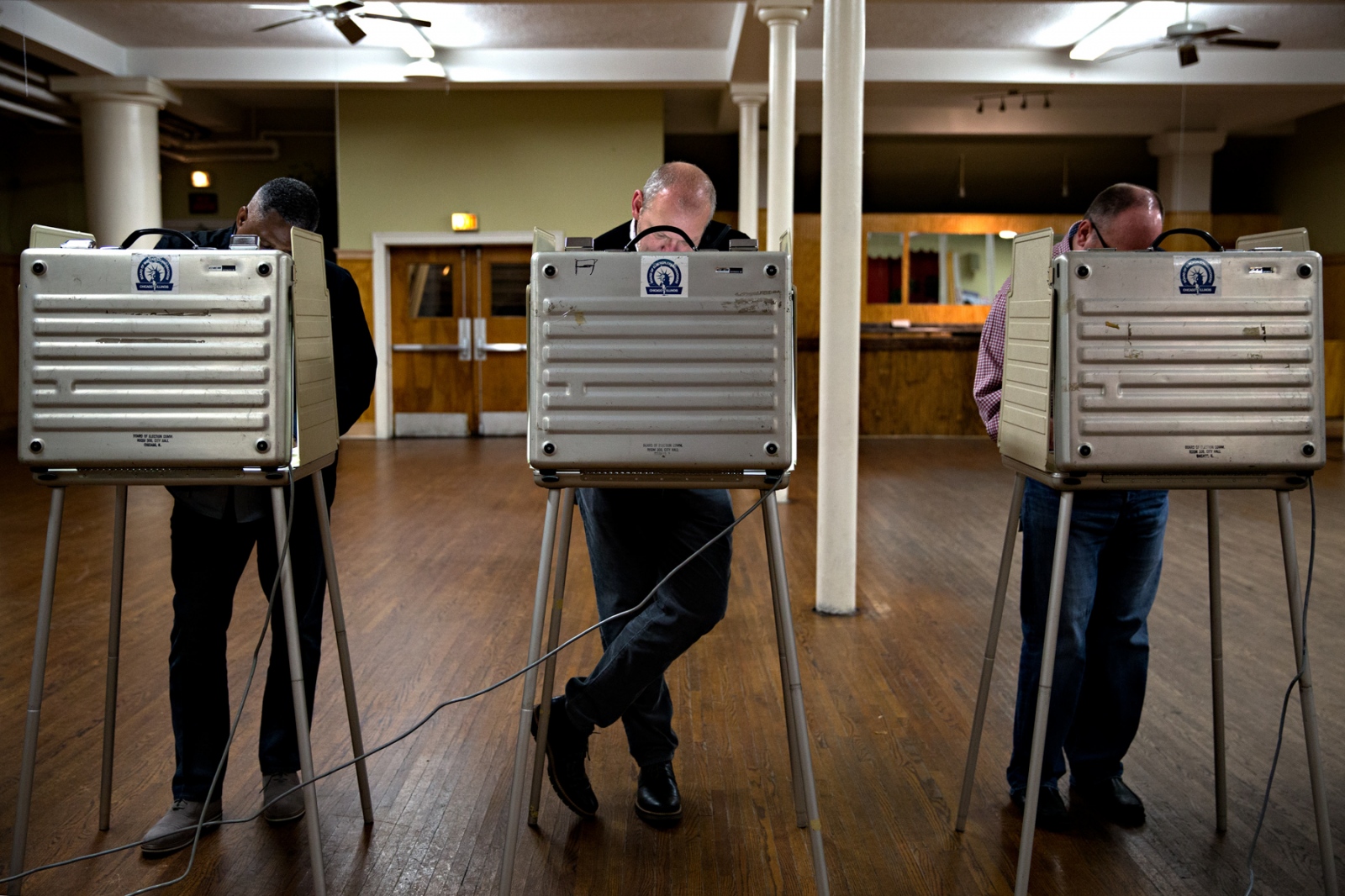 November 8, 2016 - Chicago, Illinois -Â November 8, 2016, eligible Americans stood behind voting booths to vote for their presidential candidate of choice. In one of the biggest upset in any presidential race, the widely seen as the favorite Hillary Clinton lost her presidential bid to Donald Trump who became the 45th President of the United States. 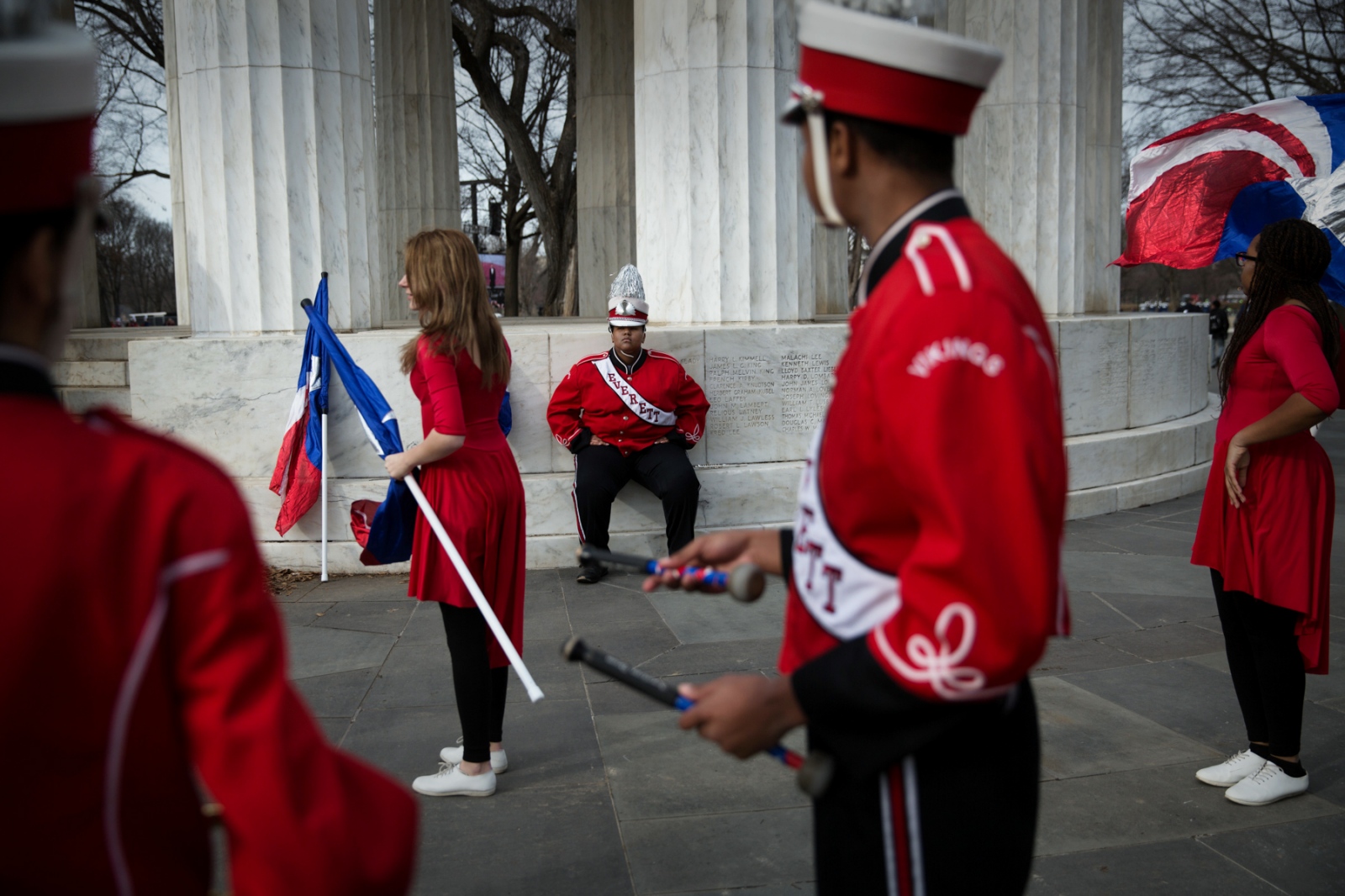 January 19, 2017 - Washington, DC -Â Members of the Everett High School Band relax after they played in honor of the President Elect Donald Trump at the Lincoln Memorial inÂ Washington,Â DC. 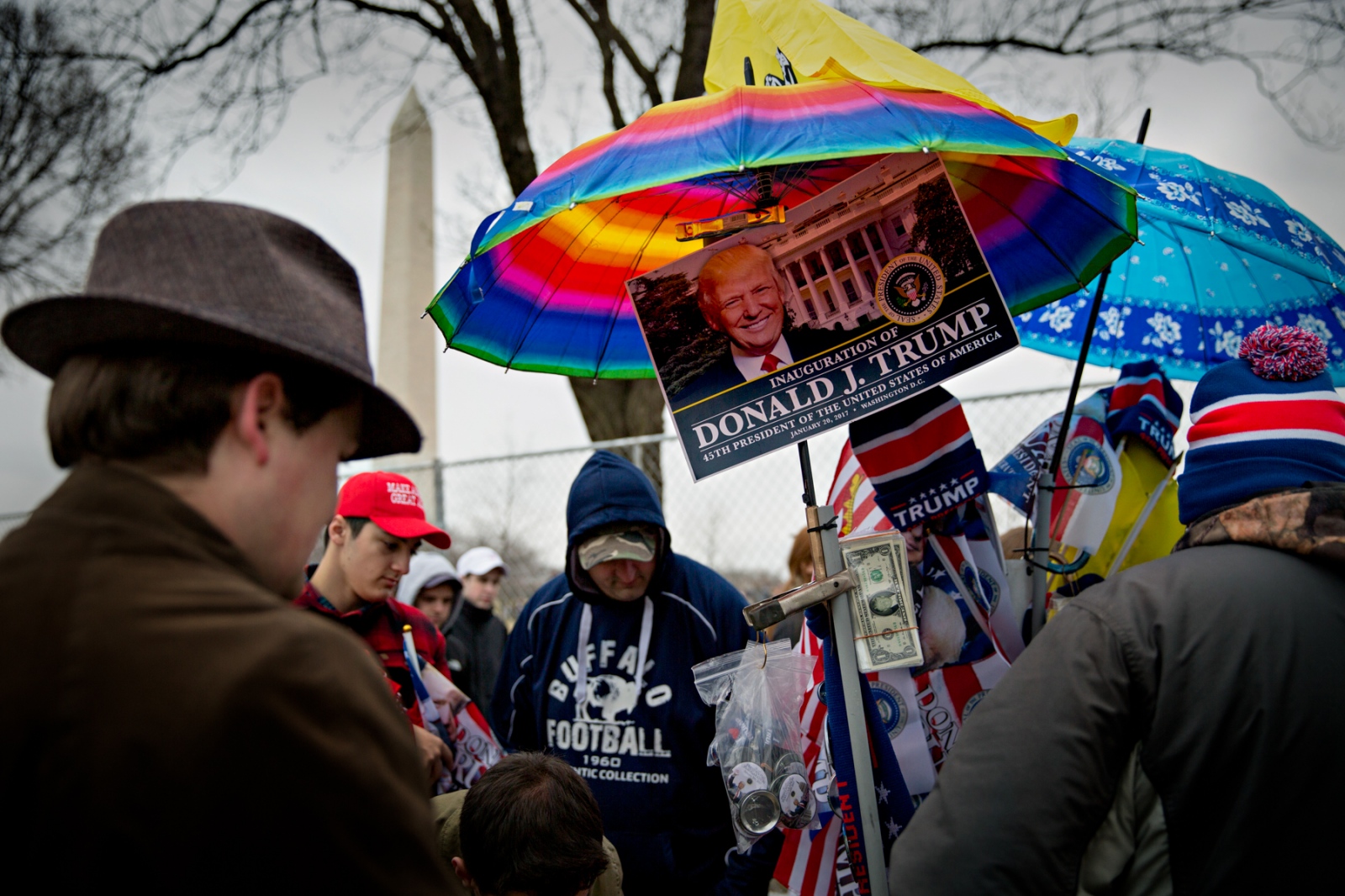 January 20, 2017 - Washington, DC -Â The election day memorabilia were on sale throughout the Washington, DC area. Pictures of Donald Trump appeared on buttons, flags, posters, signs and many items. 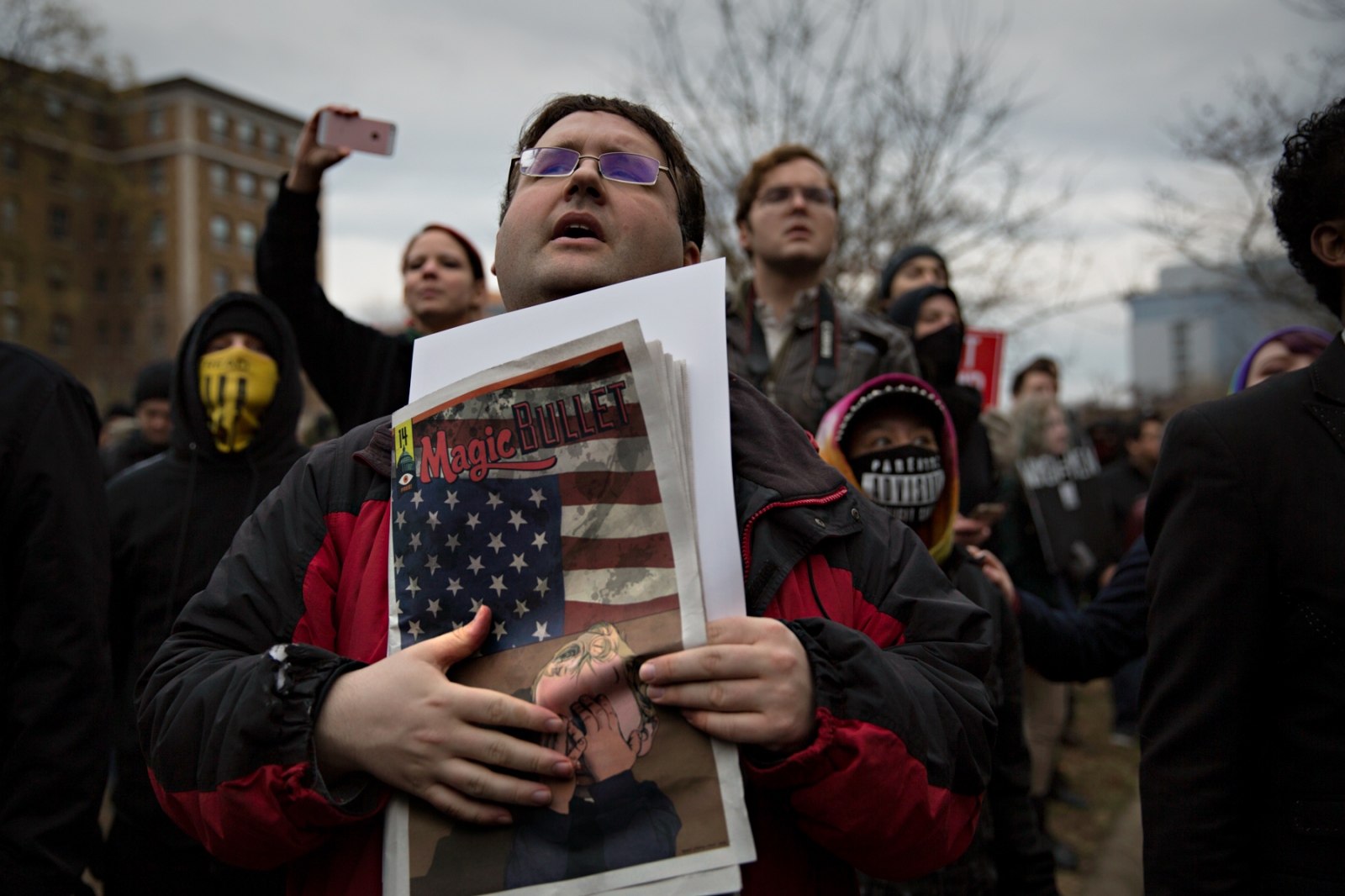 January 20, 2017 - Washington, DC -Â A protestor holds a copy of the Magic Bullet: a Washington, DC,Â free comic newspaper which is published by the DC Conspiracy. During that protest, the DC police department wearing riot gears indiscriminately arrested more than 200 people along with credentialedÂ journalists and legal observers who wore their distinctive green baseball cap. Charges ofÂ felony violations of the Riot Act which can result inÂ 10 years in prison and quarter-million-dollar fine are still pending against at least one journalist. 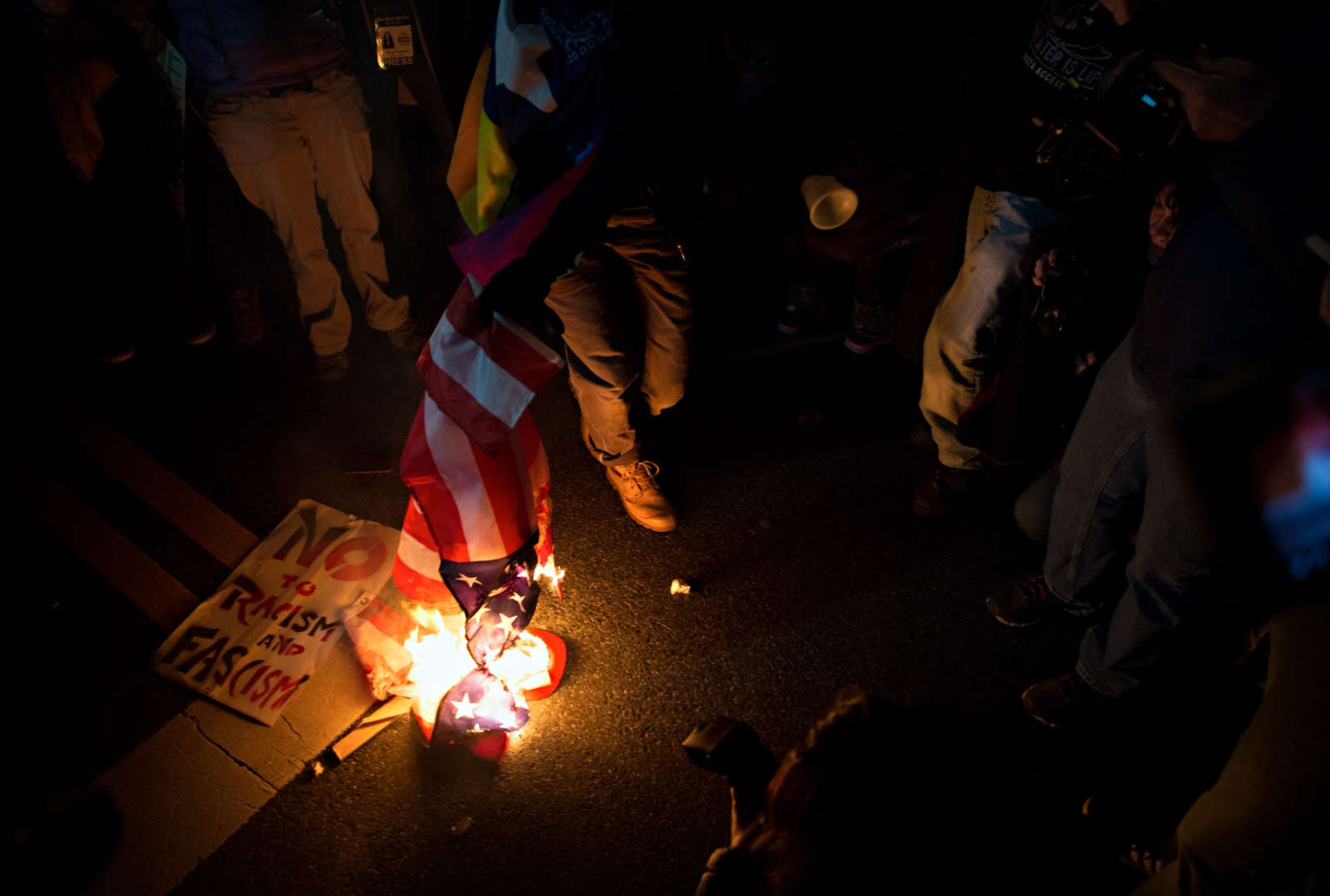 January 19, 2017 - Washington, DC -Â The anti-Trump protestors voiced their anger about the election of Donald Trump by burning a US flag during one of the many protests that lasted all day and nightÂ the day before the Inauguration.