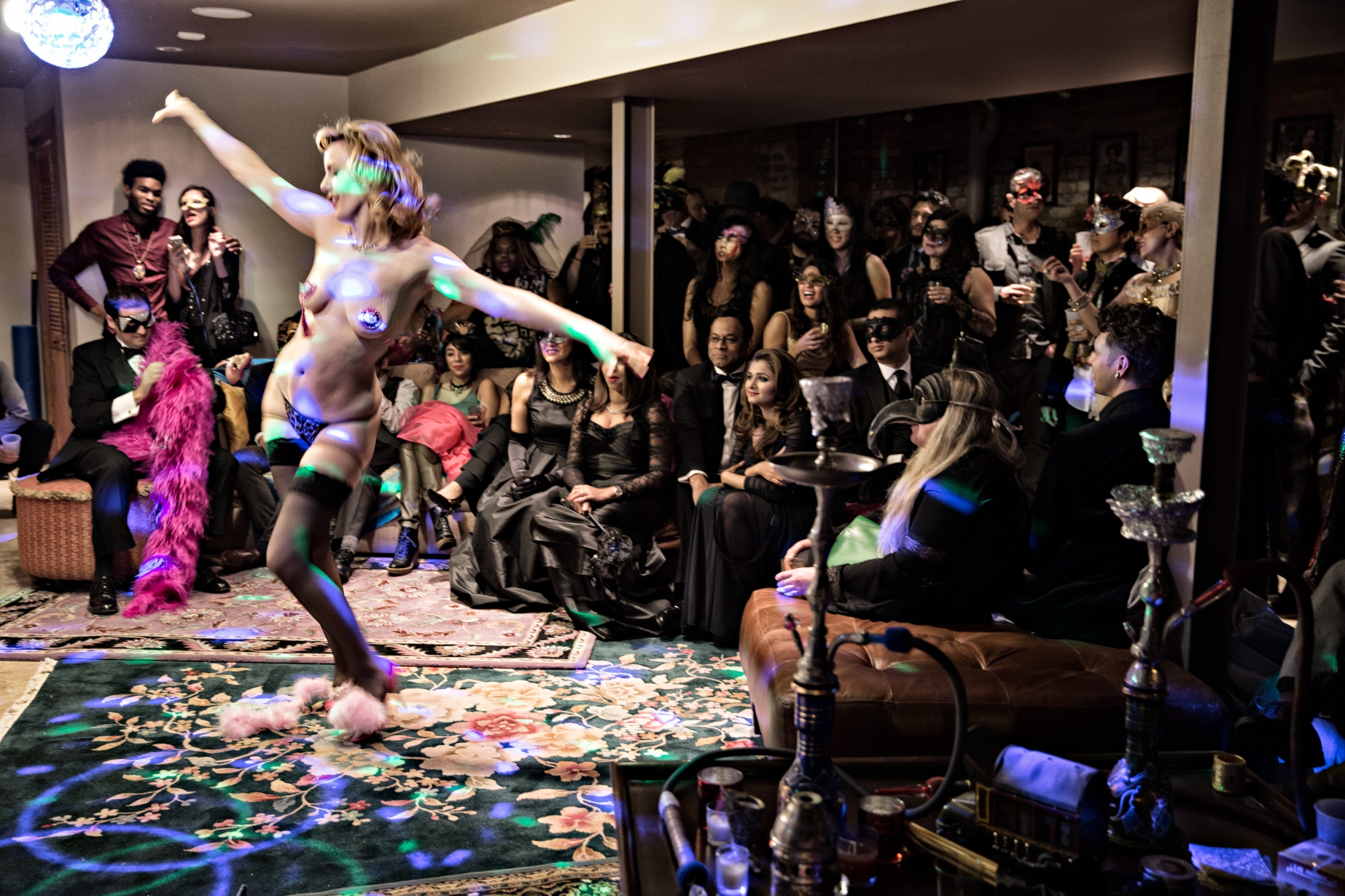 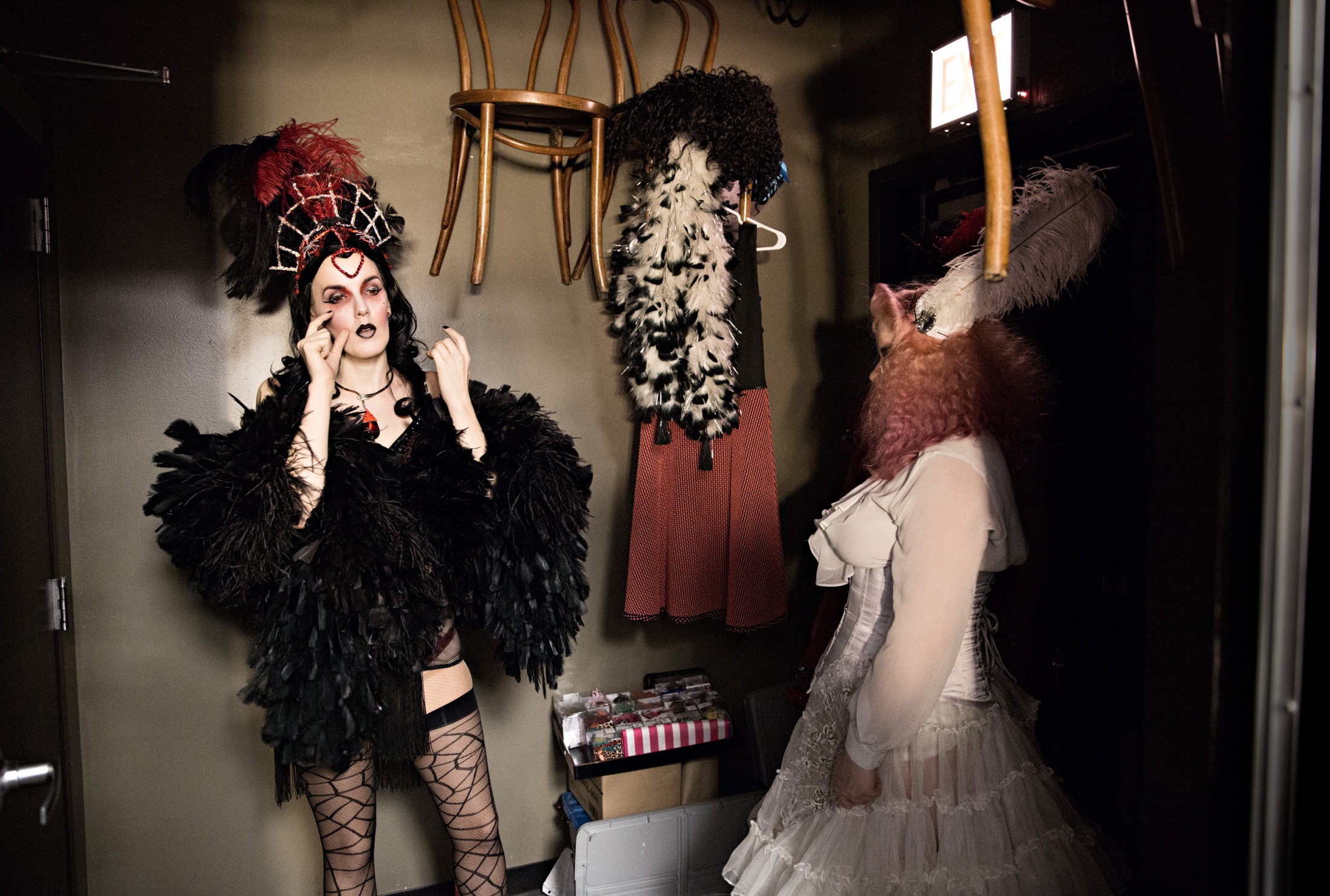 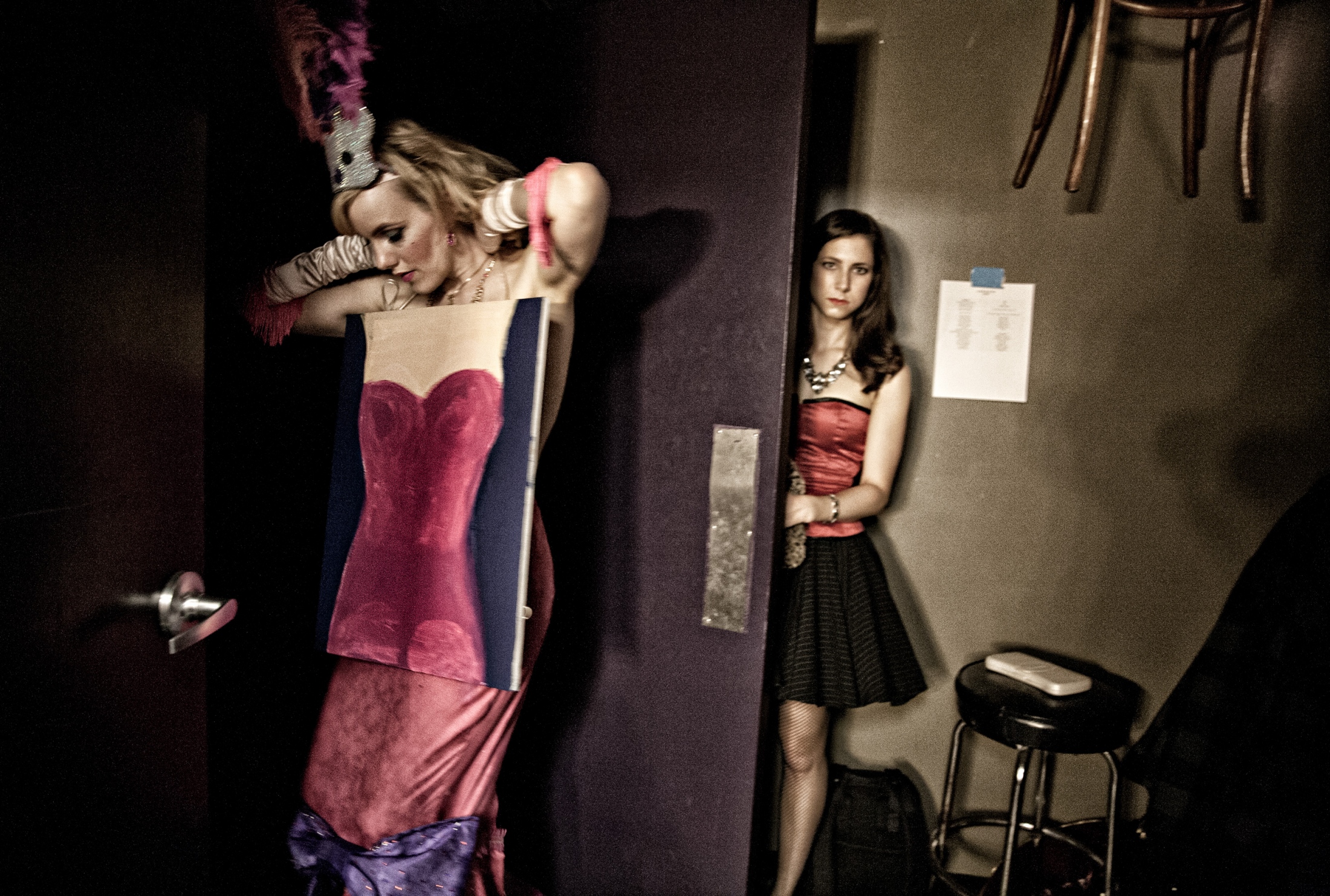 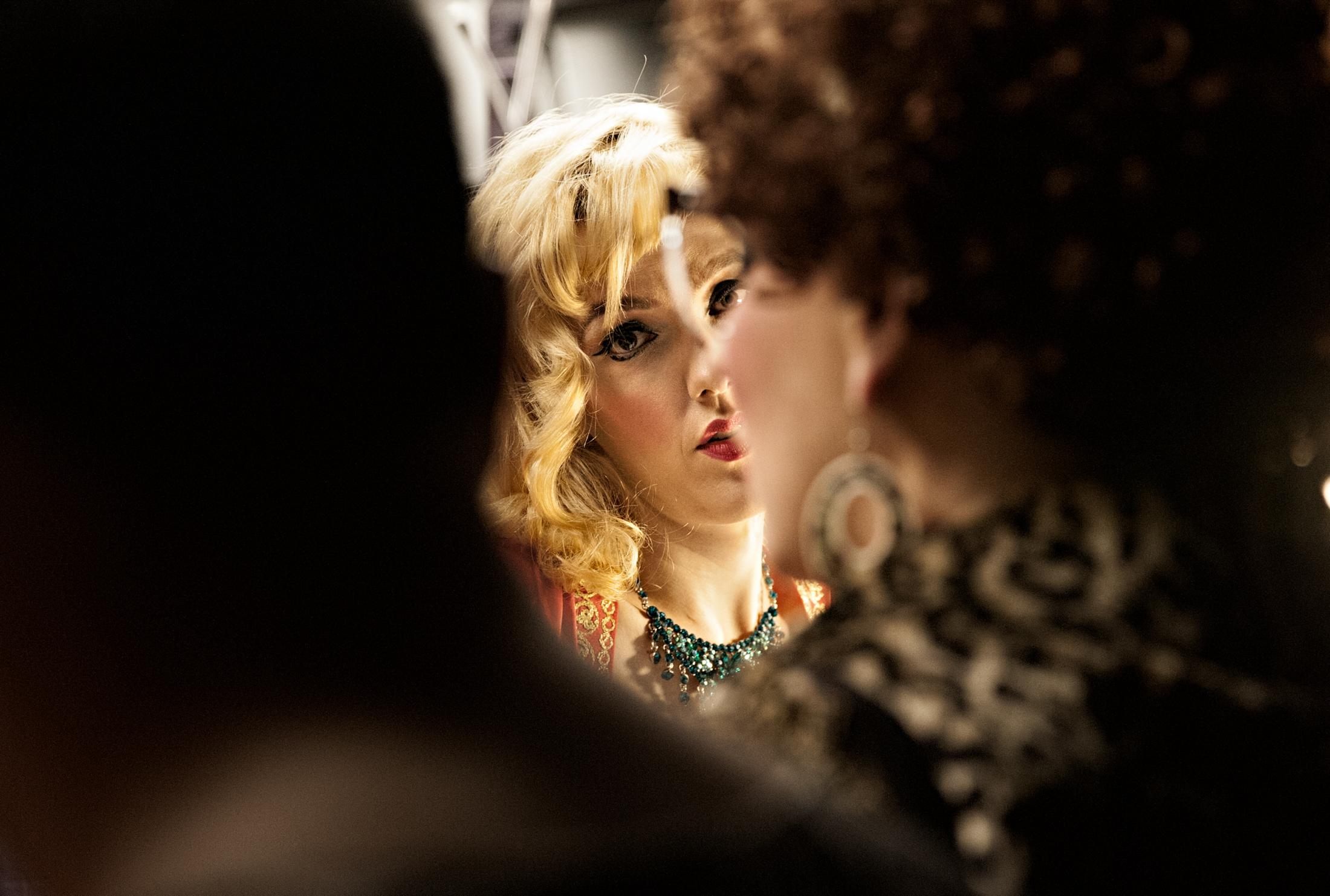 Red Hot Annie listens to a cast member while preparing for her show in the changing room. 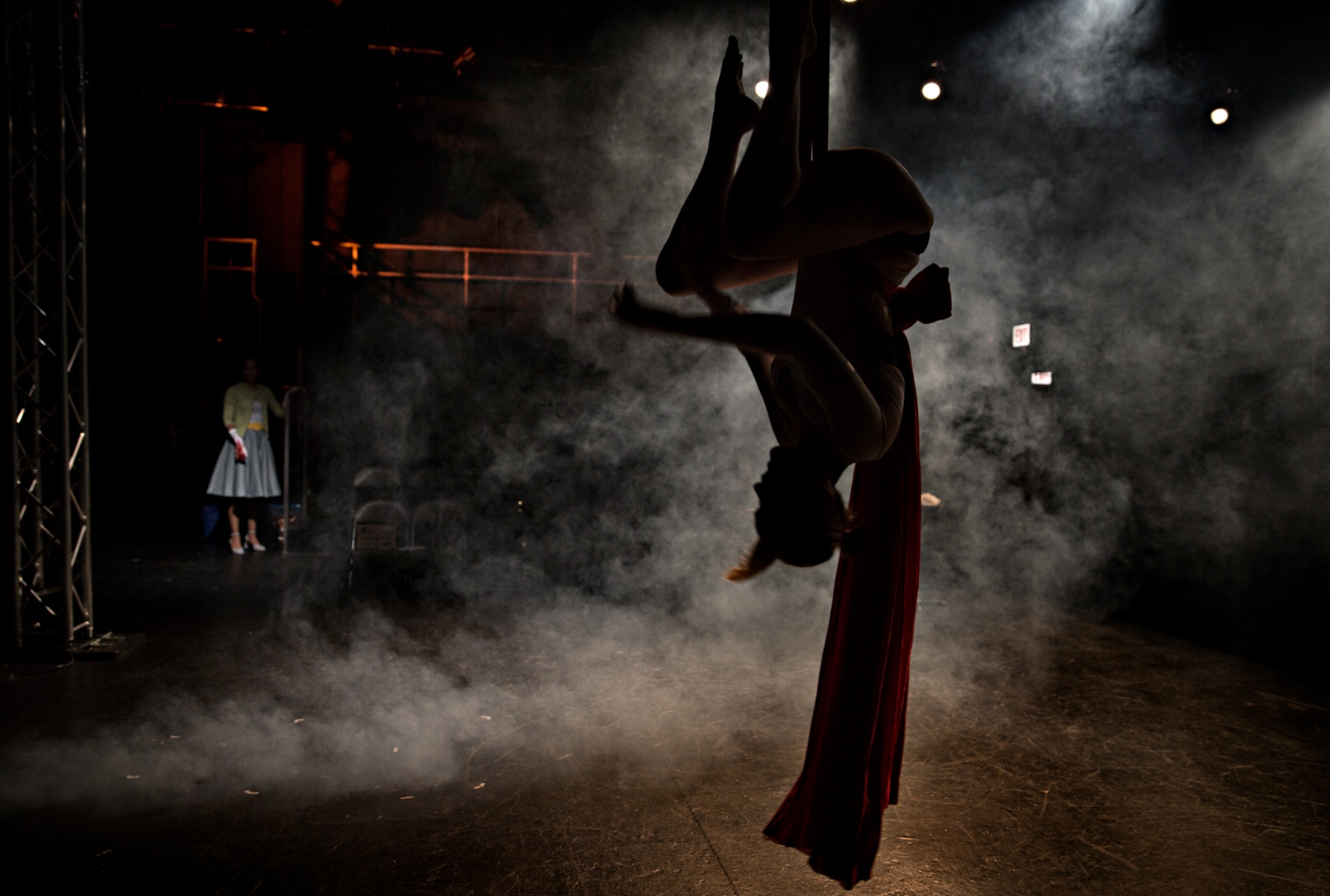 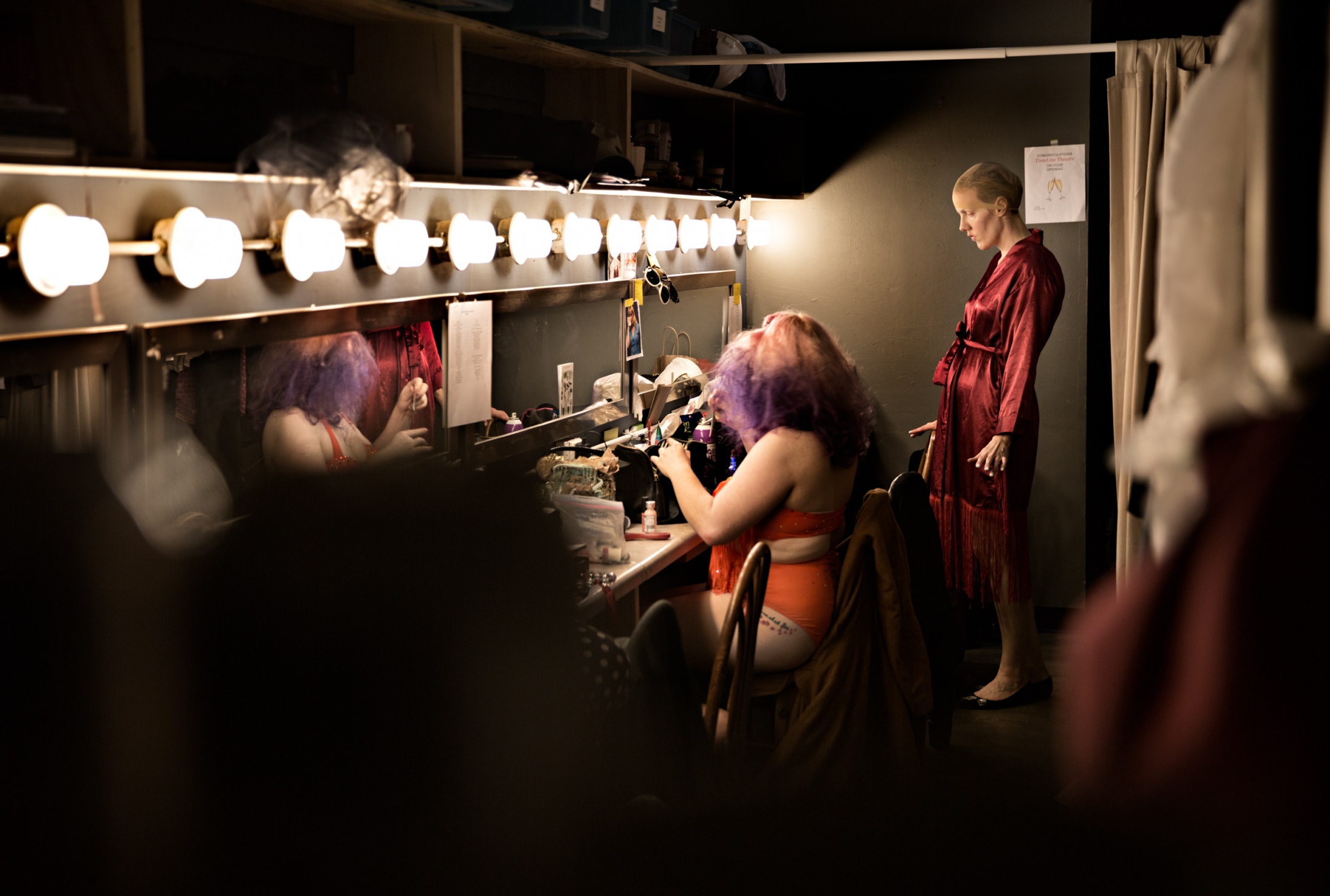 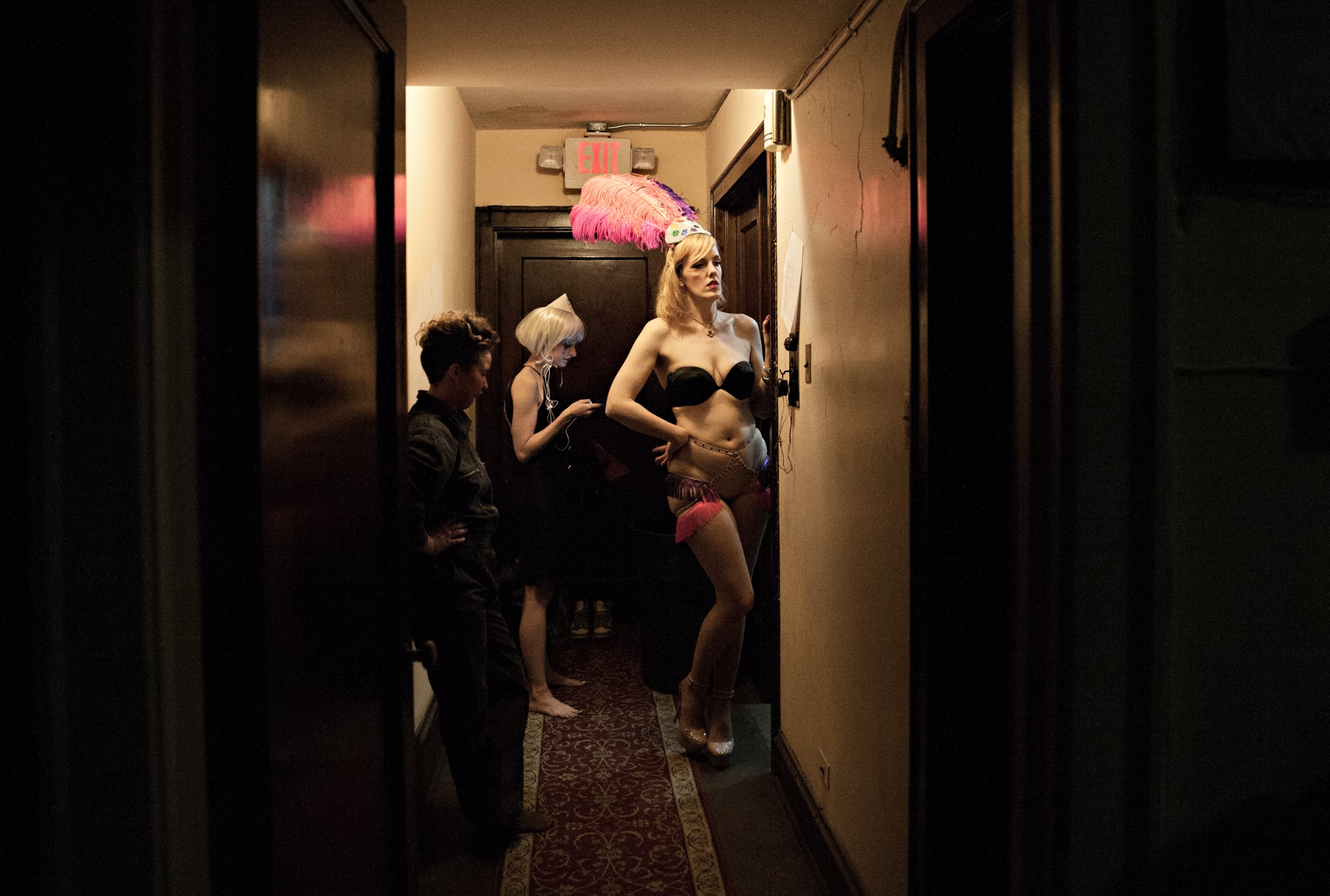 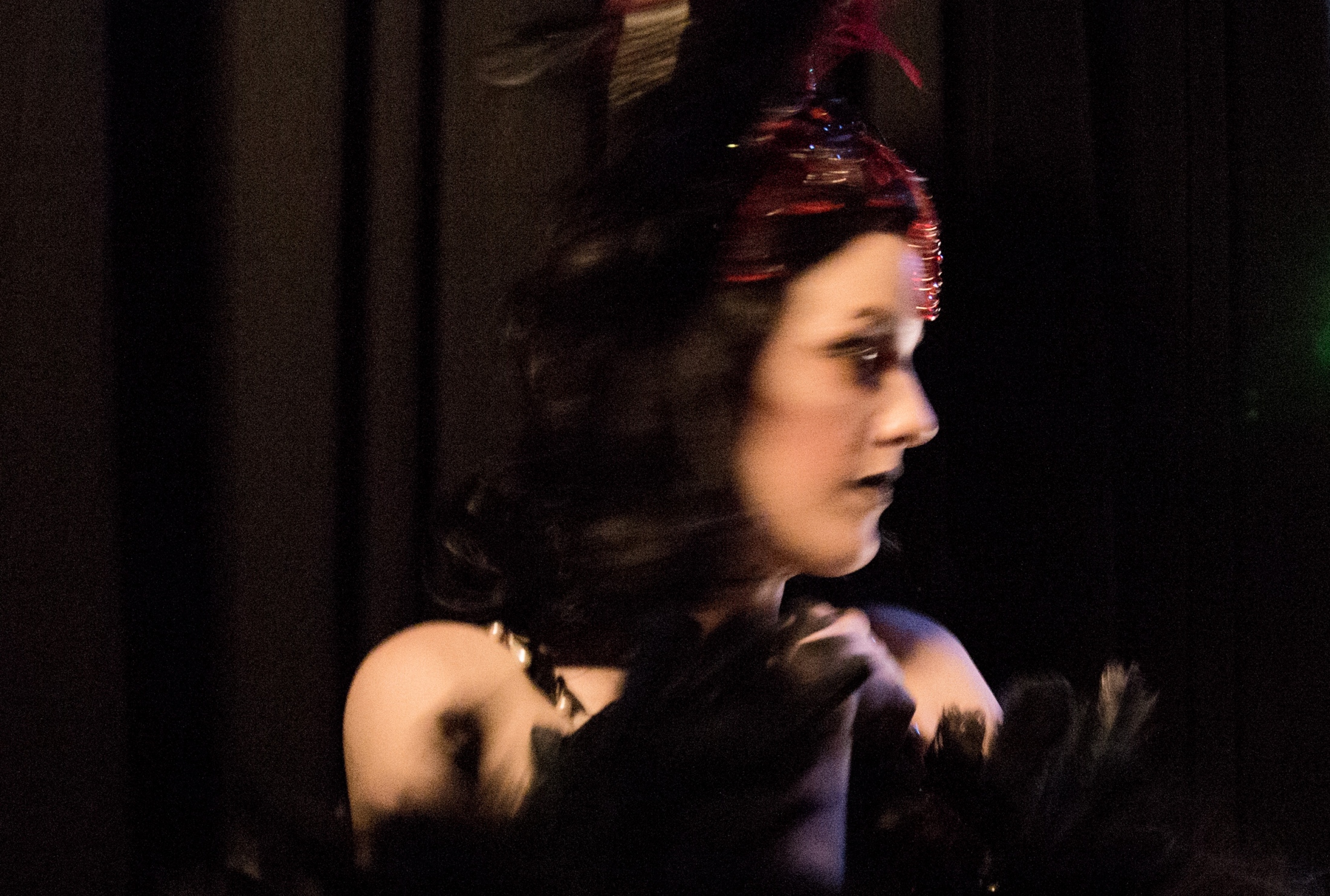 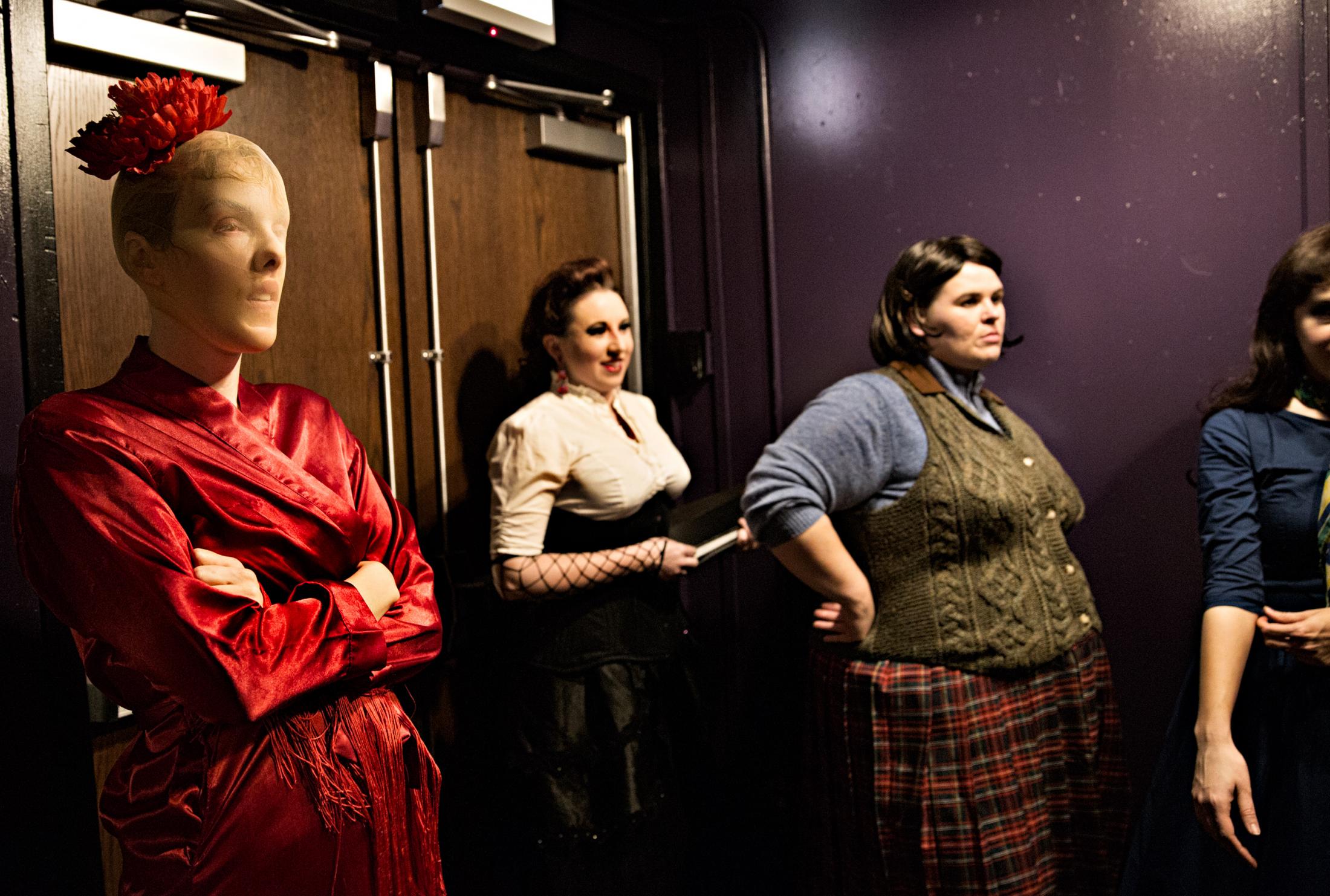 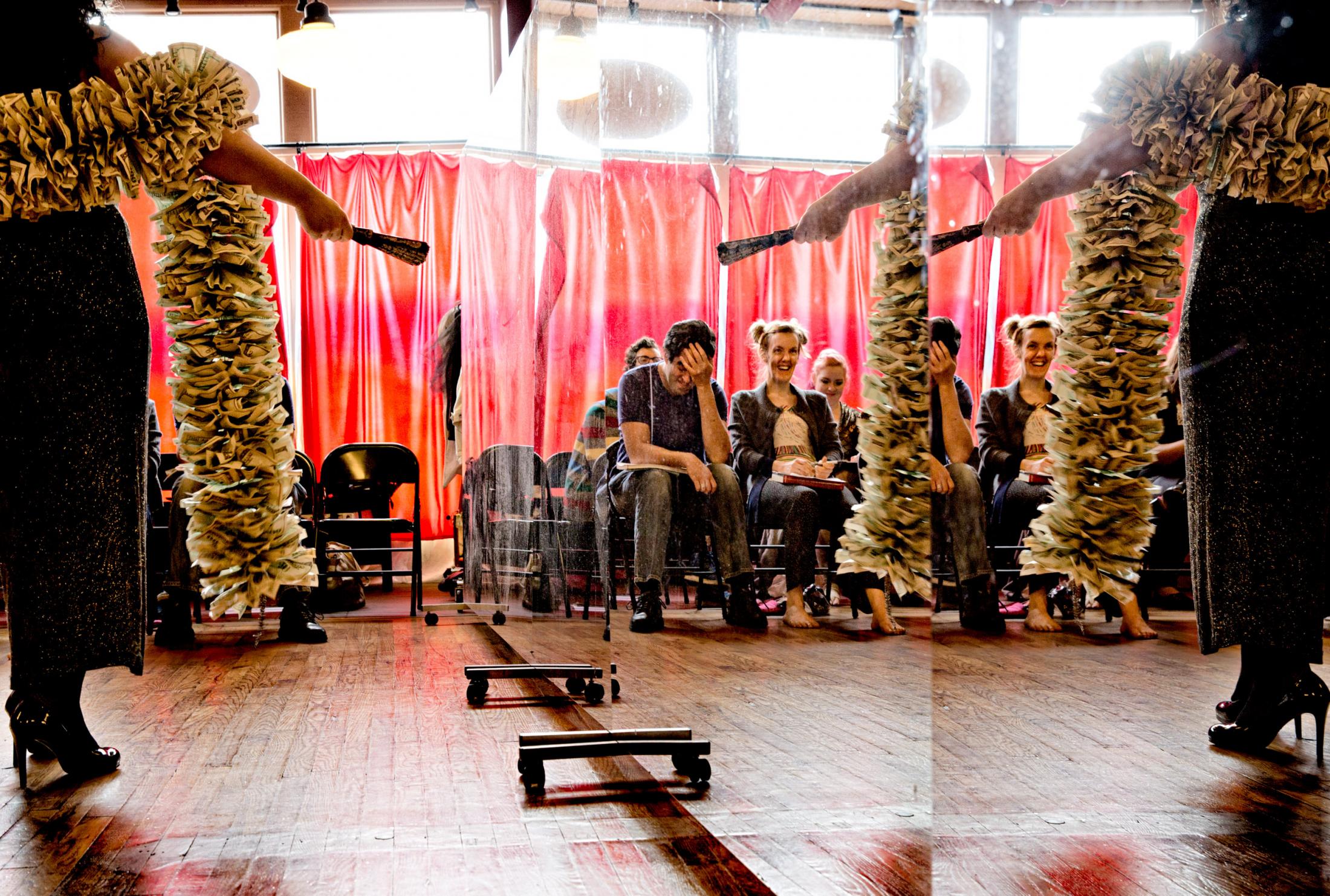 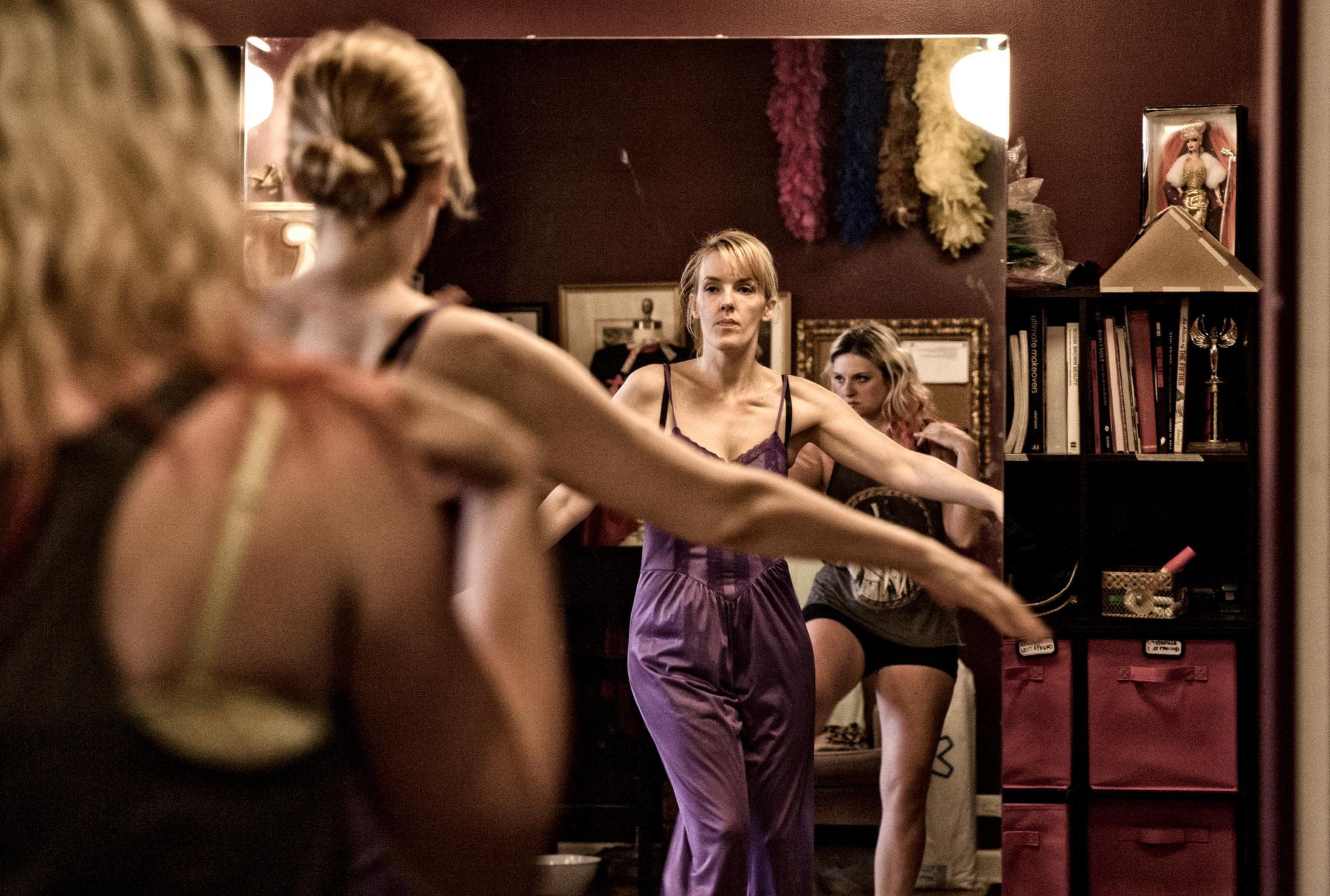 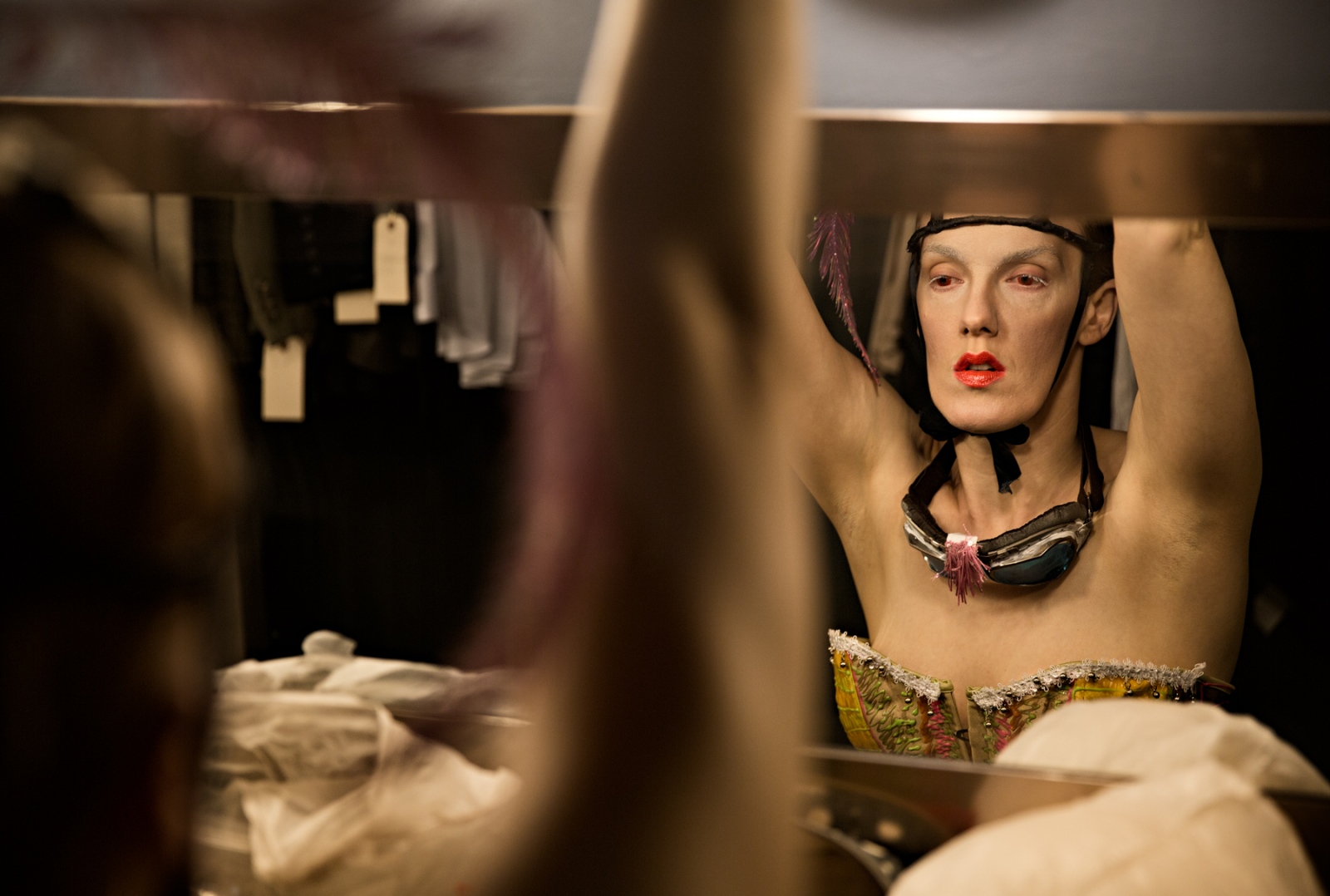 Red Hot Annie preparing for a show in the dressing room. 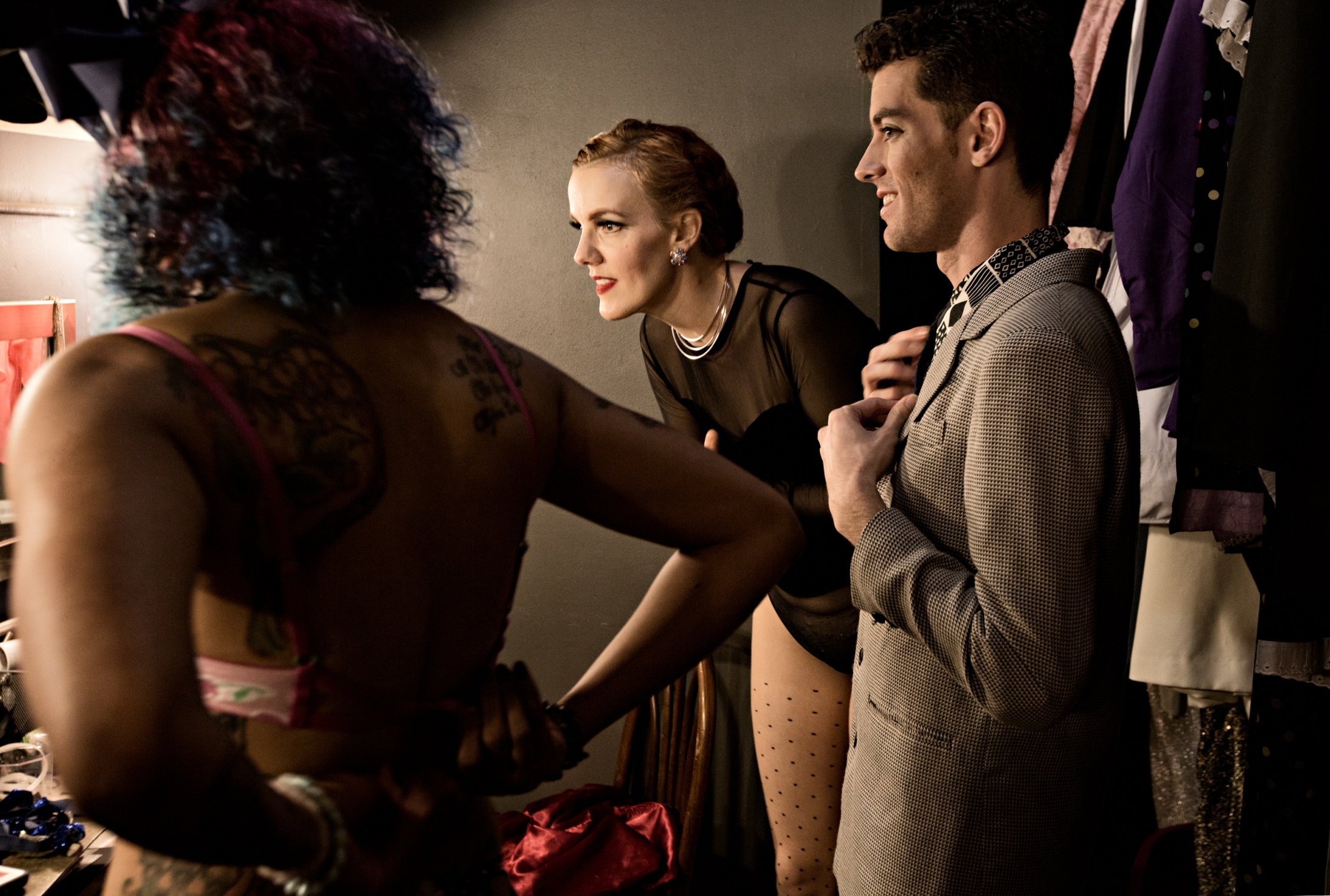 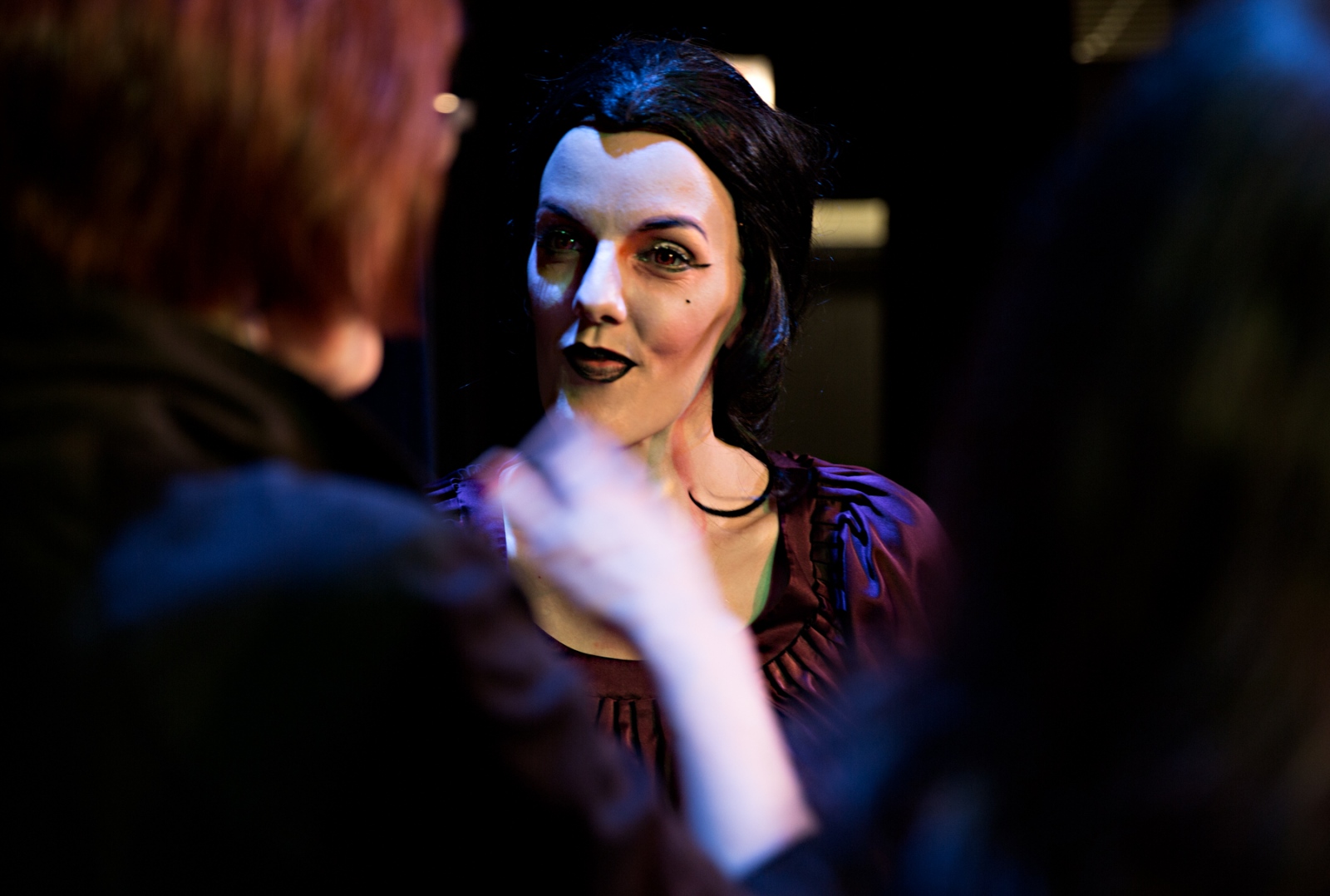 After a show, Red Hot Annie meets and greets with fans. 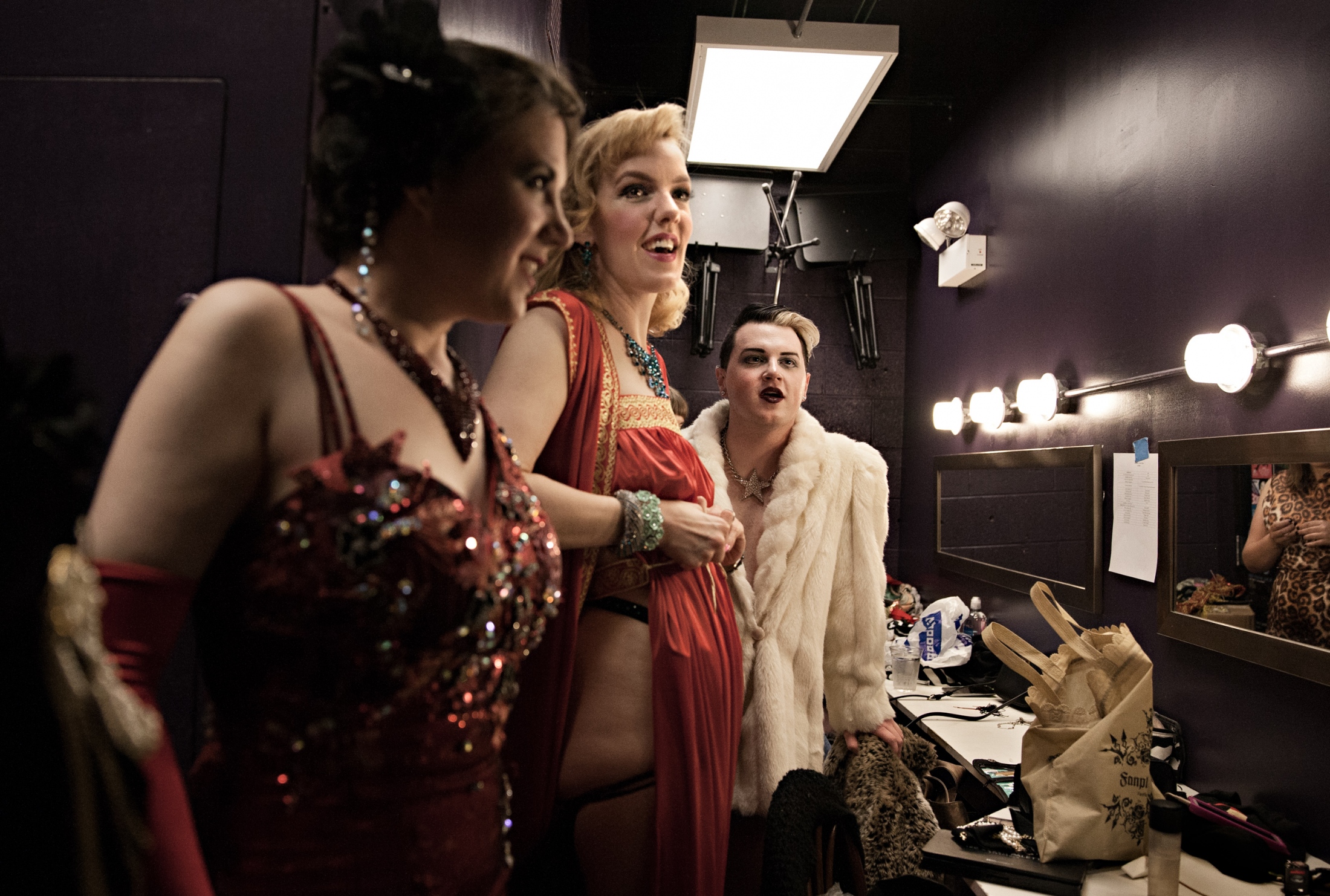 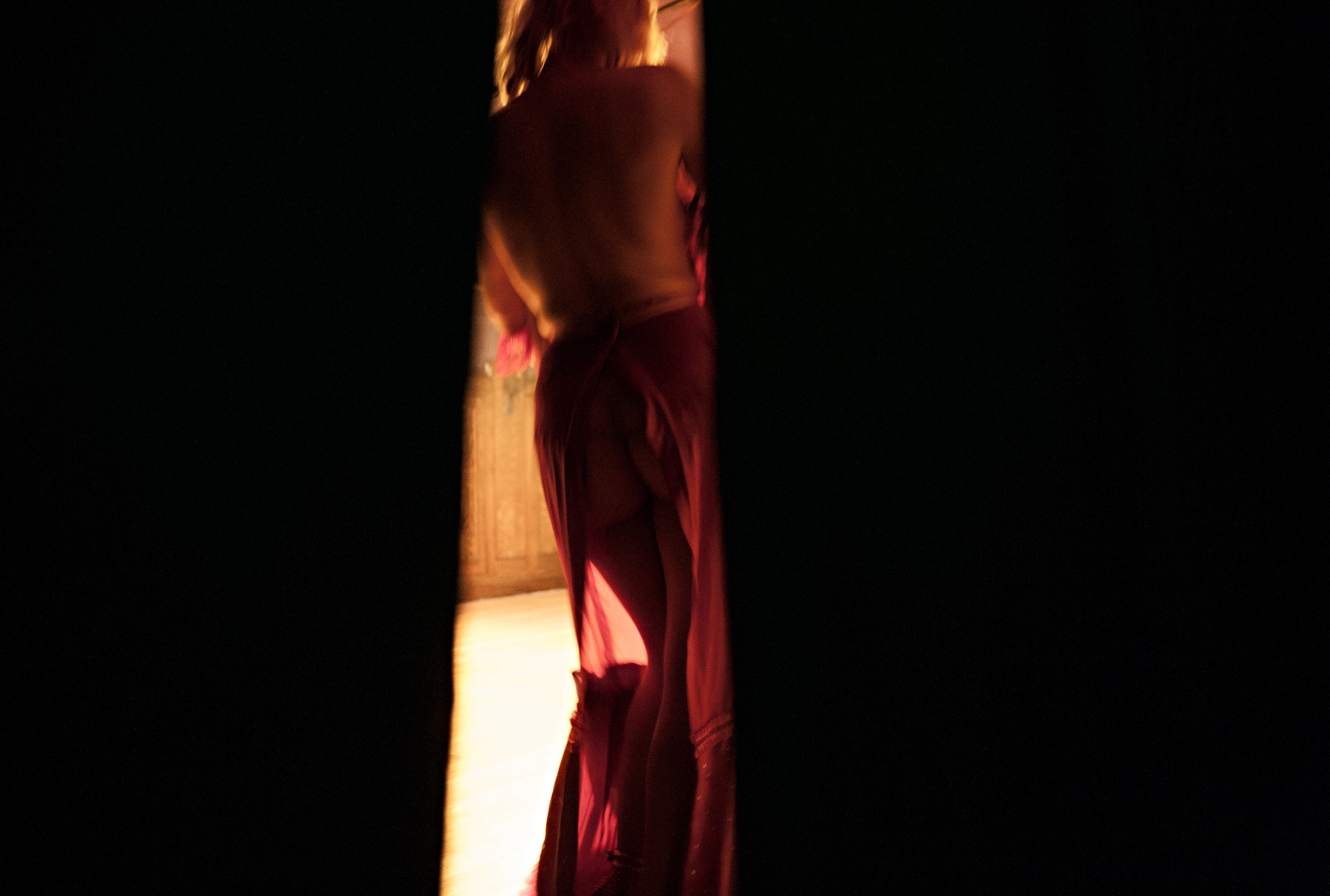 Red Hot Annie takes the stage for her final show of the night. 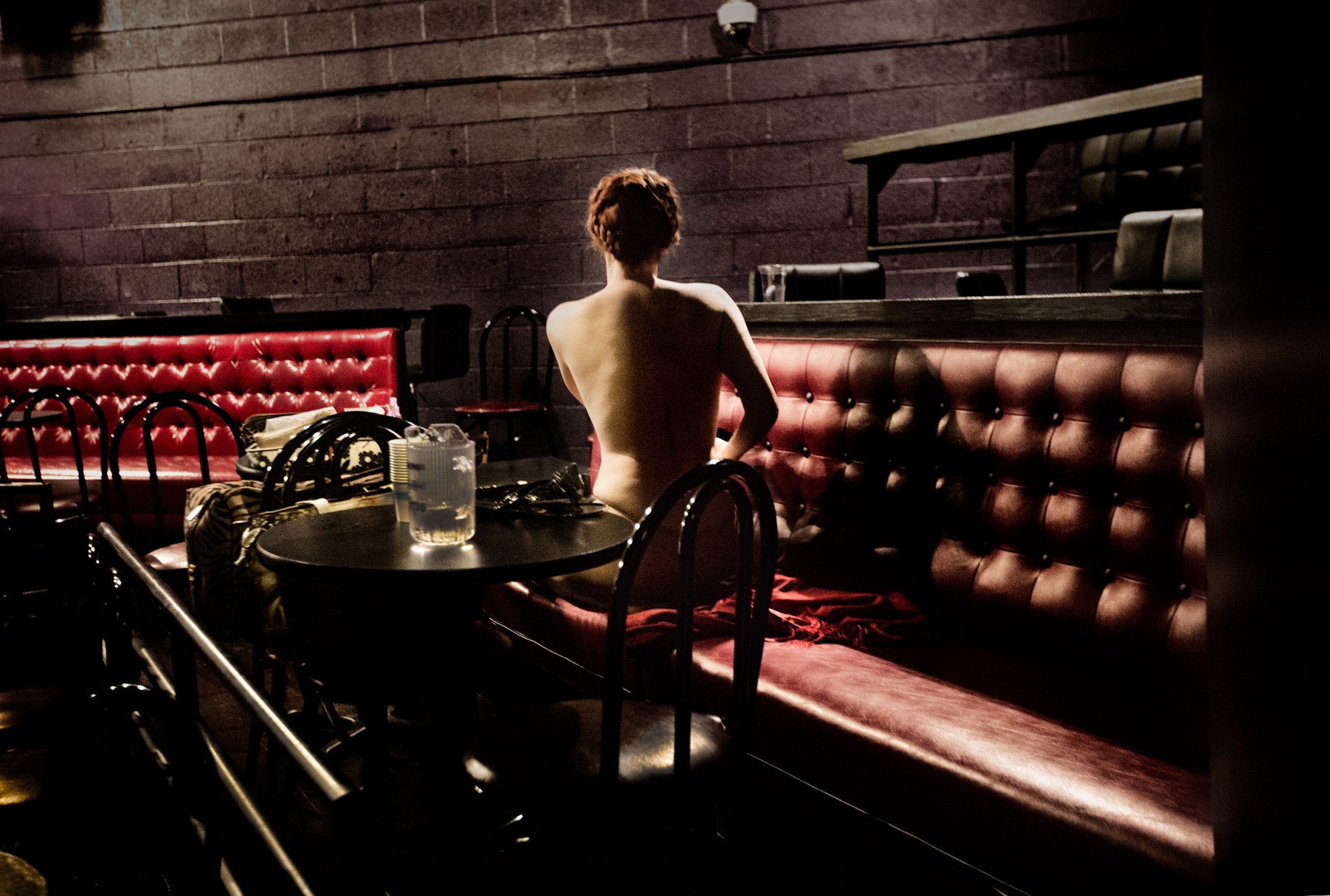 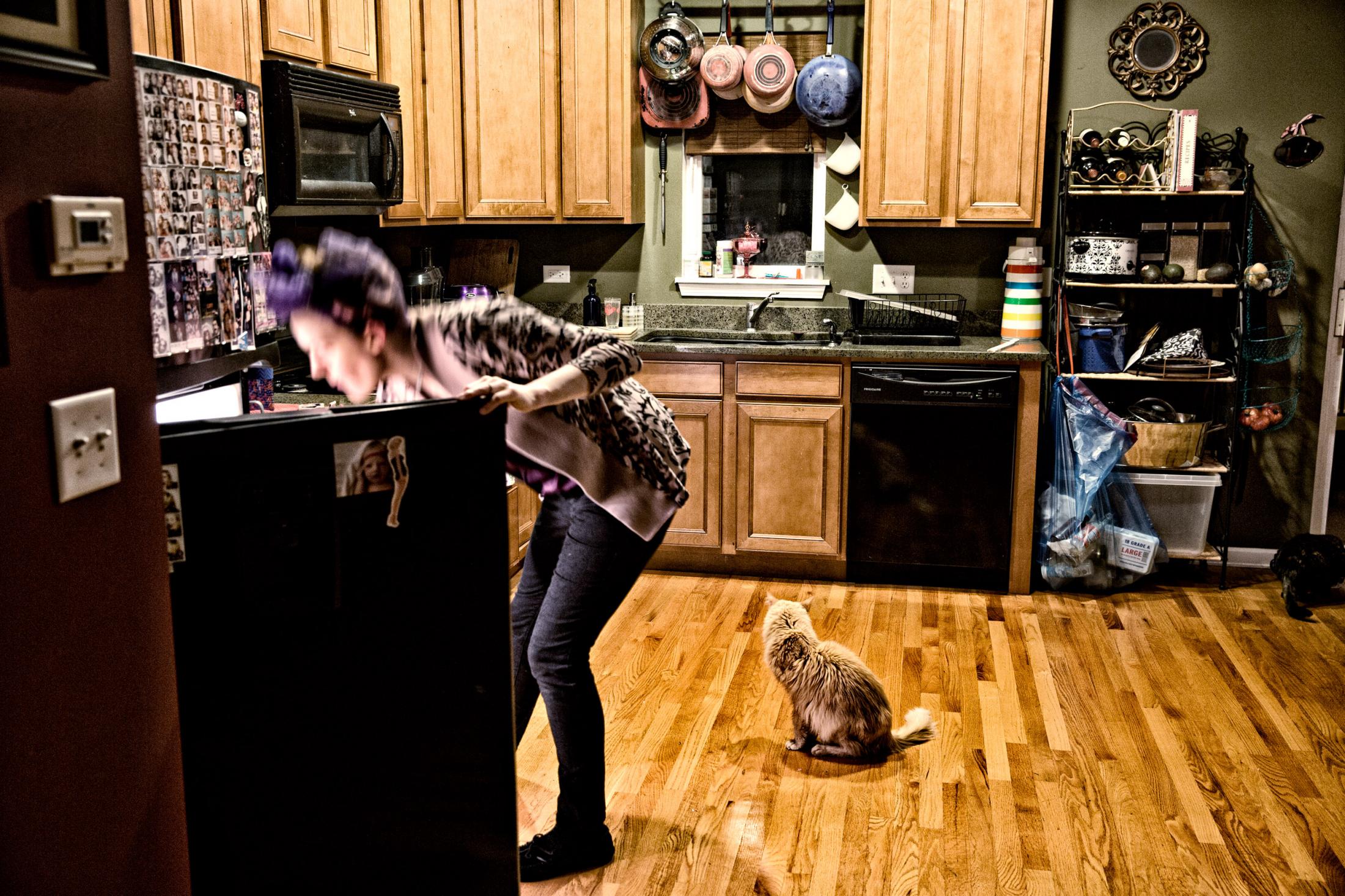 When all is said and done, during a private moment, Annie and her cat look for lunch.

Red Hot Annie, the founder and CE-Oh of the Vaudezilla Productions and Burlesque in Chicago since 2008 created one of the most successful burlesque groups in the United States.

Burlesque originated over a 150 years ago as a means of the working class to parody the operas, theater and social habits of the upper classes. While burlesque shows could incorporate many different aspects in the parody, including political statement and stand-up comedy, they also included an act of striptease particular to itself. Specifically incorporating the same exaggerated sense of comedy, and political statement other acts in the show espoused.

Annie attended her first burlesque show when she was 25. It was right after her divorce, and she chose to invite a date she had just met to a burlesque show. Her expectation of burlesque, at that time, was a sort of Las Vegas dancer performing a classic striptease.

Much to her surprise, however, the show consisted of an all female cast of performers and technicians who were in total control of all aspects of the show: from the performers, light technicians, stage direction, those making calls, and announcers "“ all were women. It was obvious to her that the performers had made their own costumes and had choreographed their own unique personal acts.

Annie has a background in classic theater where she performed in productions of shows like Macbeth, she had never experienced a similar theater production. She remembers showing up to auditions where a number of female actors would compete for one or two female roles, while the male actors stood a better chance of landing a one of the plentiful male roles. Annie was mesmerized and amazed at the fact that women dominated the burlesque show. the women thrived in the burlesque environment and were free to expand on their own creativity.

Burlesque is not the same as an act of striptease: the power structure between the performer and the audience is different. It is often said, "Strippers dance for money. Burlesque dancers strip for applause." This is the engine that empowers the burlesque performer over the audience.In a more common striptease show all power is in the hands of the audience.While a stripper's body has to adhere to the current societal view of that which is beautiful and desirable, the burlesque performer can be anyone: a girl, a boy, a transgender and can be of any shape or size.The performer is the story teller and can tell the story on display in any shape or form he or she desires "“ the success of which leads to applause and in many occasion a standing ovation!

To be a burlesque dancer, one has to be at peace with one's body-flaws and imperfections.

Annie relayed a time when she was hired to perform striptease in a strip club. The manager of the club asked her to come and do burlesque as an experiment. It turned out that when doing her burlesque striptease at the strip club, she was rewarded for lacking confidence. The more unsure and more apprehensive she felt and the less confidence she portrayed during her act, the more satisfied the audience was "“ and more tips she received.However, as she became more confident in her striptease act, her tips decreased and so did the attraction the audience felt towards the act. On the other hand, during a burlesque show the audience's enthusiasm increases as the performer's confidence increases.

The above example illustrates the power structure difference between striptease and burlesque. This difference may emanate from the fact that a striptease show is simply a transaction where the audience is there to receive a service - much like when a person pays for a massage, the stripper is there to perform and provide a service to the audience. At a burlesque show, the performer is not providing a service - the performer is an artist displaying her or his work for the audience to take it or leave it.

Annie's Vaudezilla group of dancers includes everyone: men, women, and transgender persons.They are dancers and performers of different shapes and sizes.They are comfortable with themselves.Burlesque is where they have fun, enjoy the show and support one another.

One truth holds for every performer: Burlesque can only be done well if done from the heart.