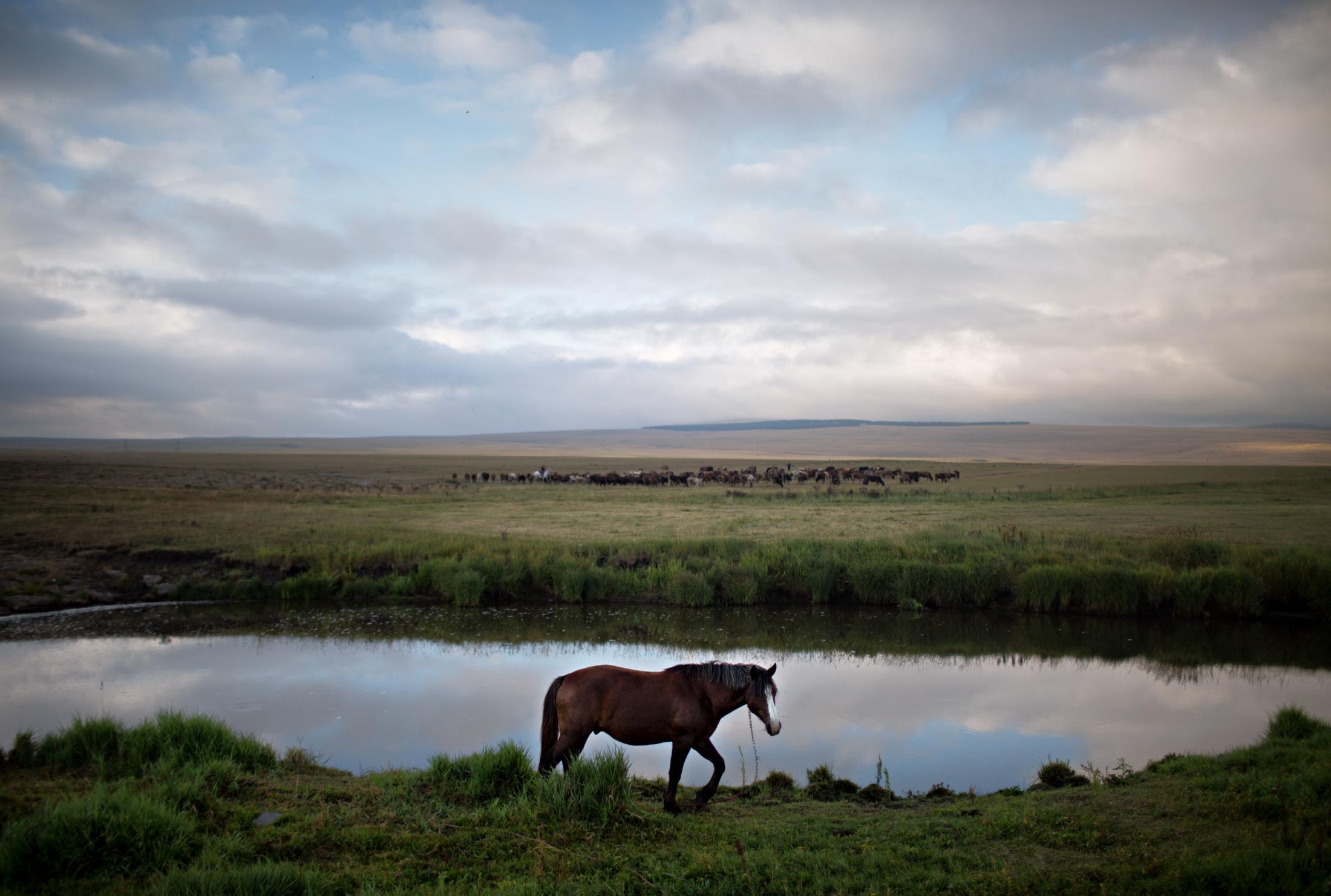 A horse roams by a small lake near the Village of Gorelovka, Georgia. 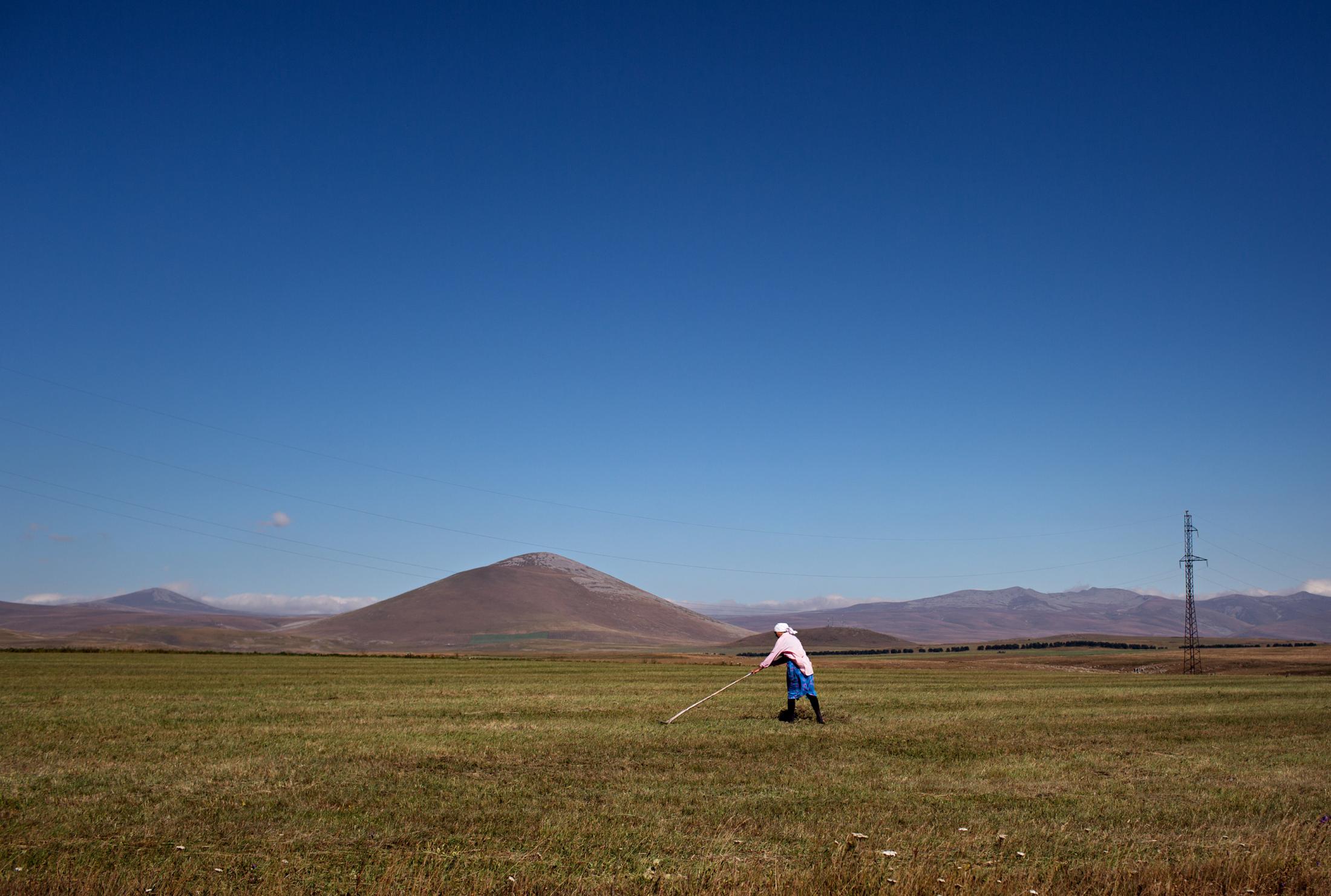 Throughout the short summer months, the villagers prepare for the winter. One of the tasks is to make sure all hay is gathered to feed the animals during the cold season. Here, a lone woman, rakes in hay from the freshly harvested field. 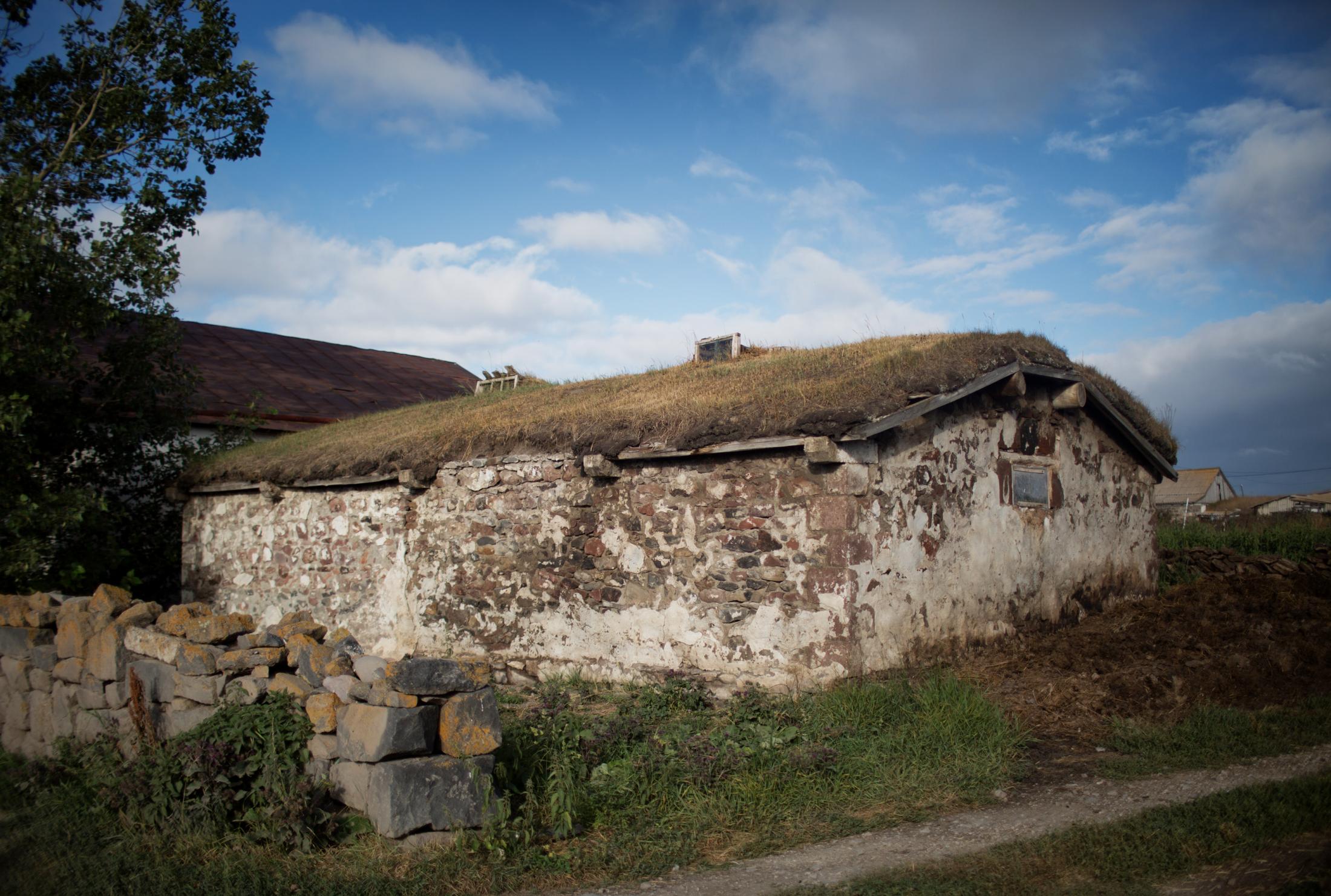 When the Doukhobors came in mid 1800s, they built homes with roofs covered with sand from the nearby lake. They are suppose to provide insulation during the long winter months. 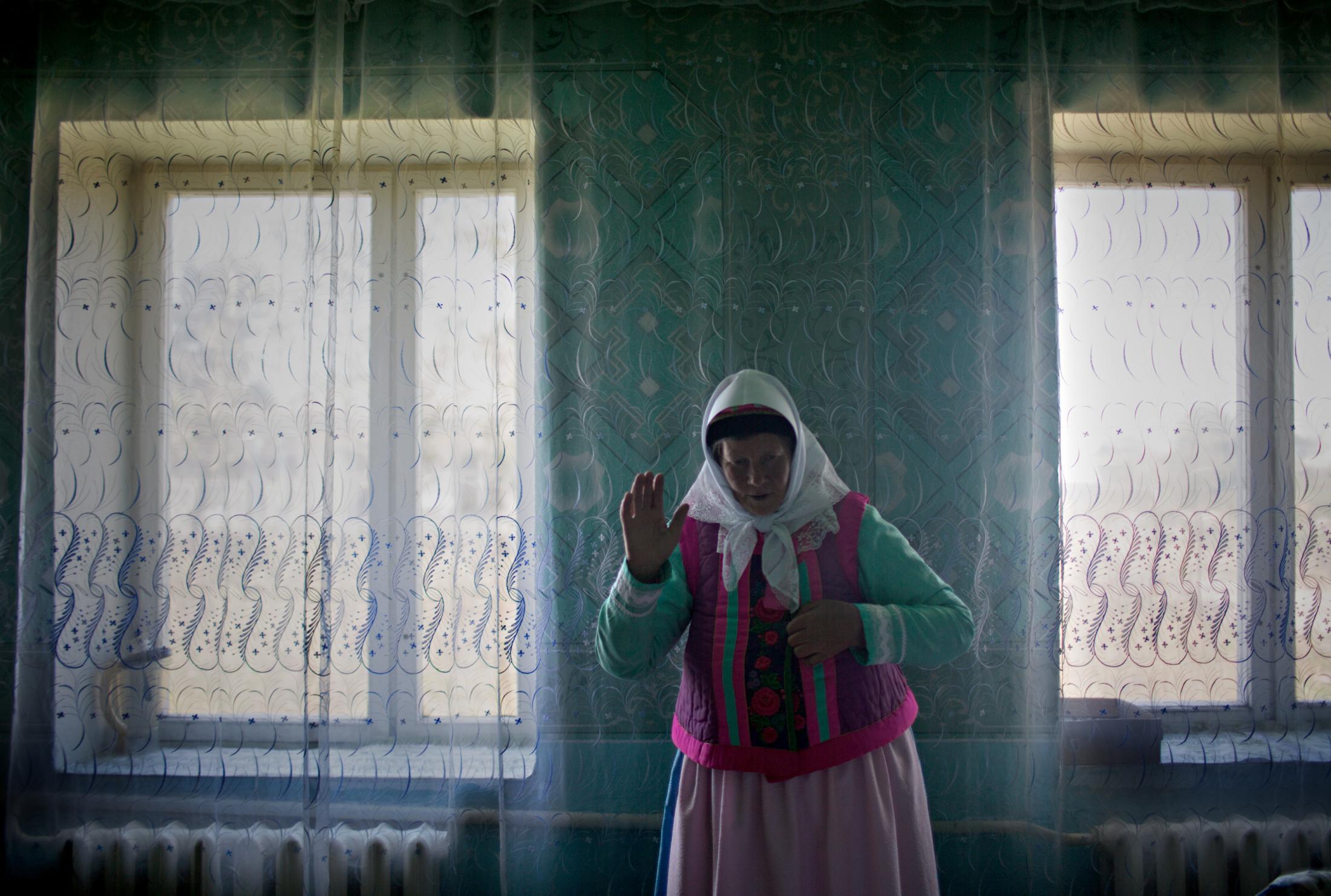 A Doukhobor woman shows off her traditional clothing. The Doukhobors are peaceful and their homes are painted with joyful shades of green, blue and white. 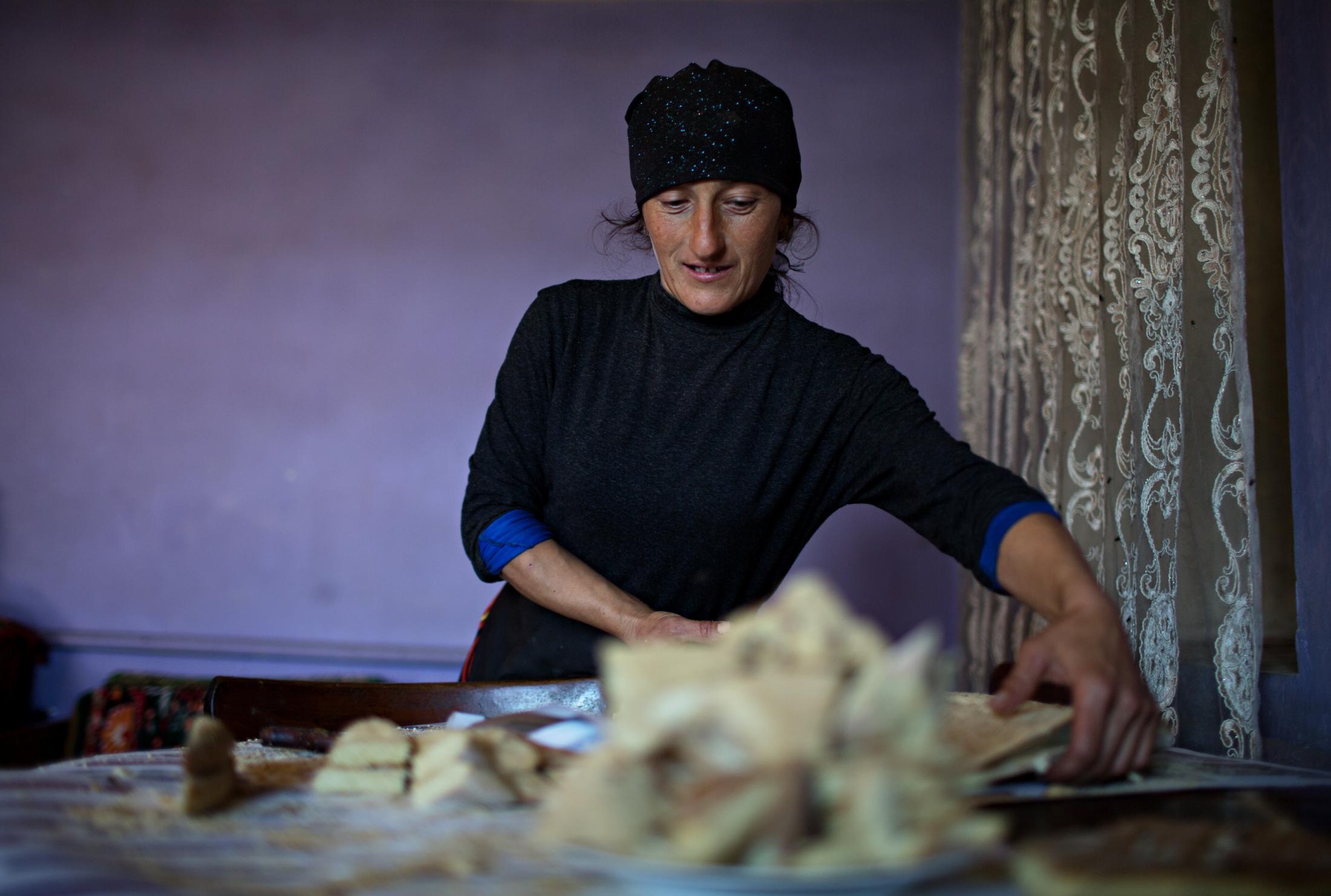 A Muslim woman prepares the bread she has baked in anticipation of the Eid al-Adha, which is also known as the Feast of Sacrifice or Festival of Sacrifice. This celebration serves as a reminder of when Ibrahim was willing to sacrifice his son to God, according to Islamic belief. 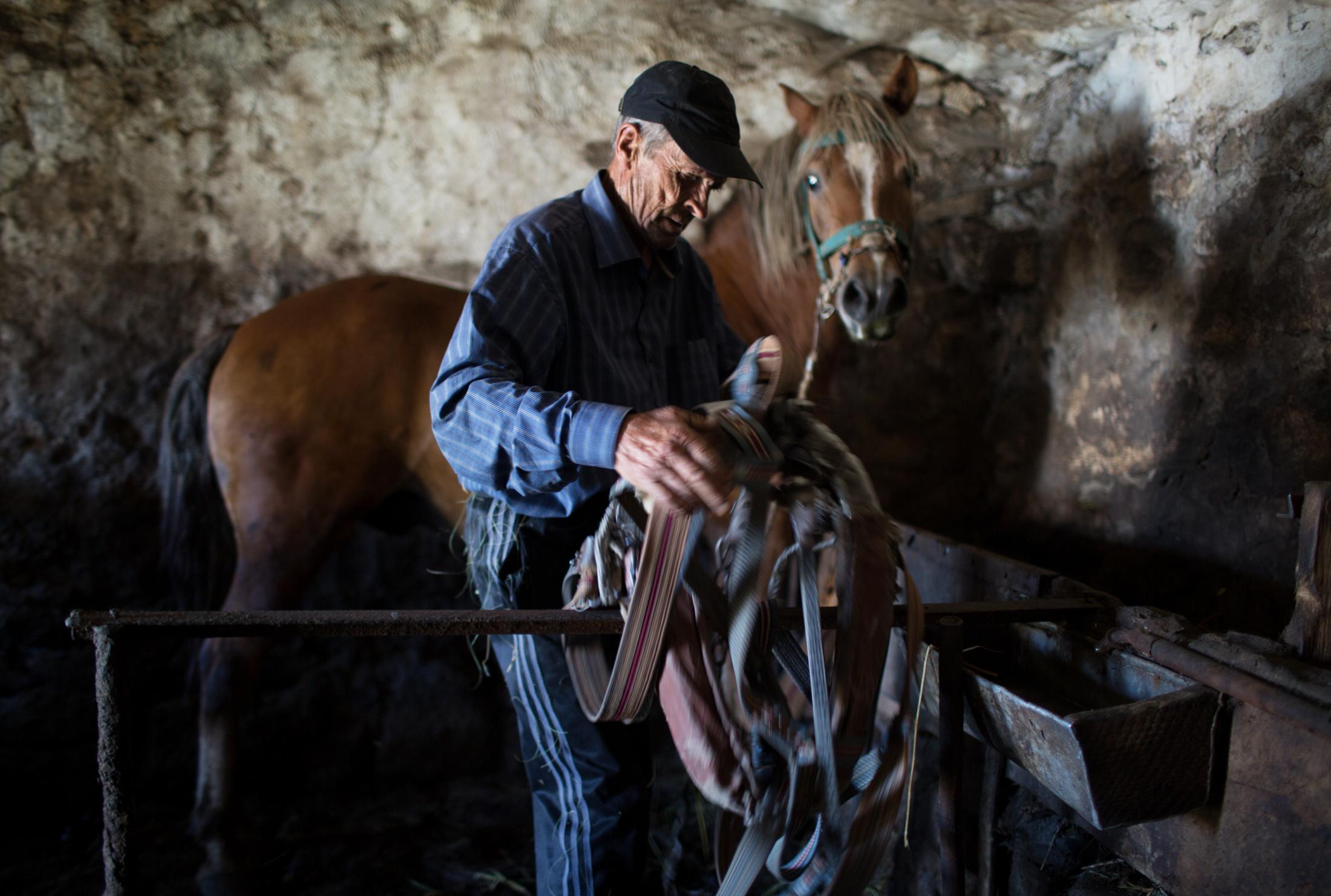 A Doukhobory farmer takes care of his horse after having worked the filed. The barn into which the horse is kept is part of his parents home built more than 100 years ago when the first Doukhobories arrived in the region. 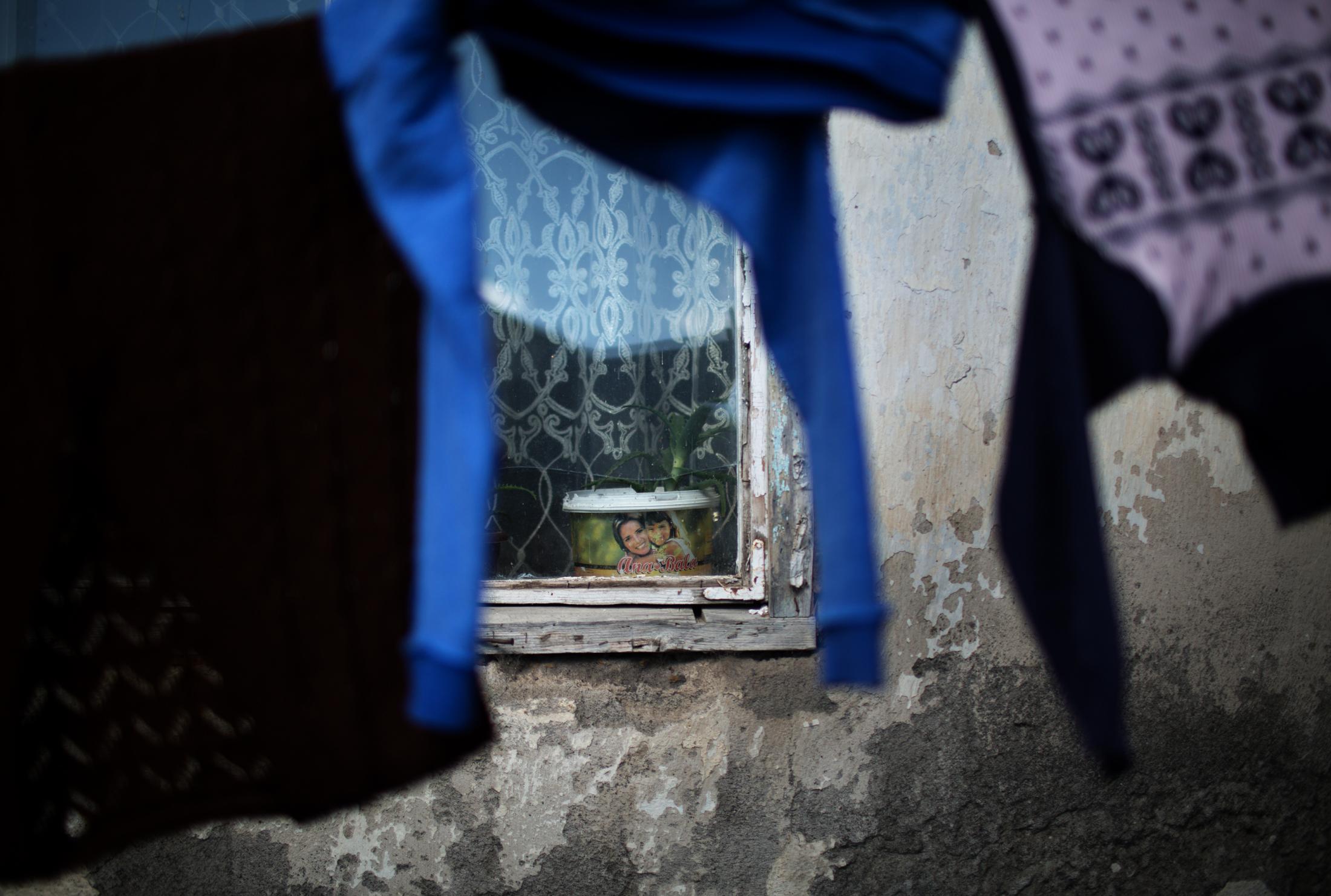 Pictures of happy people can be seen on a Muslim home. 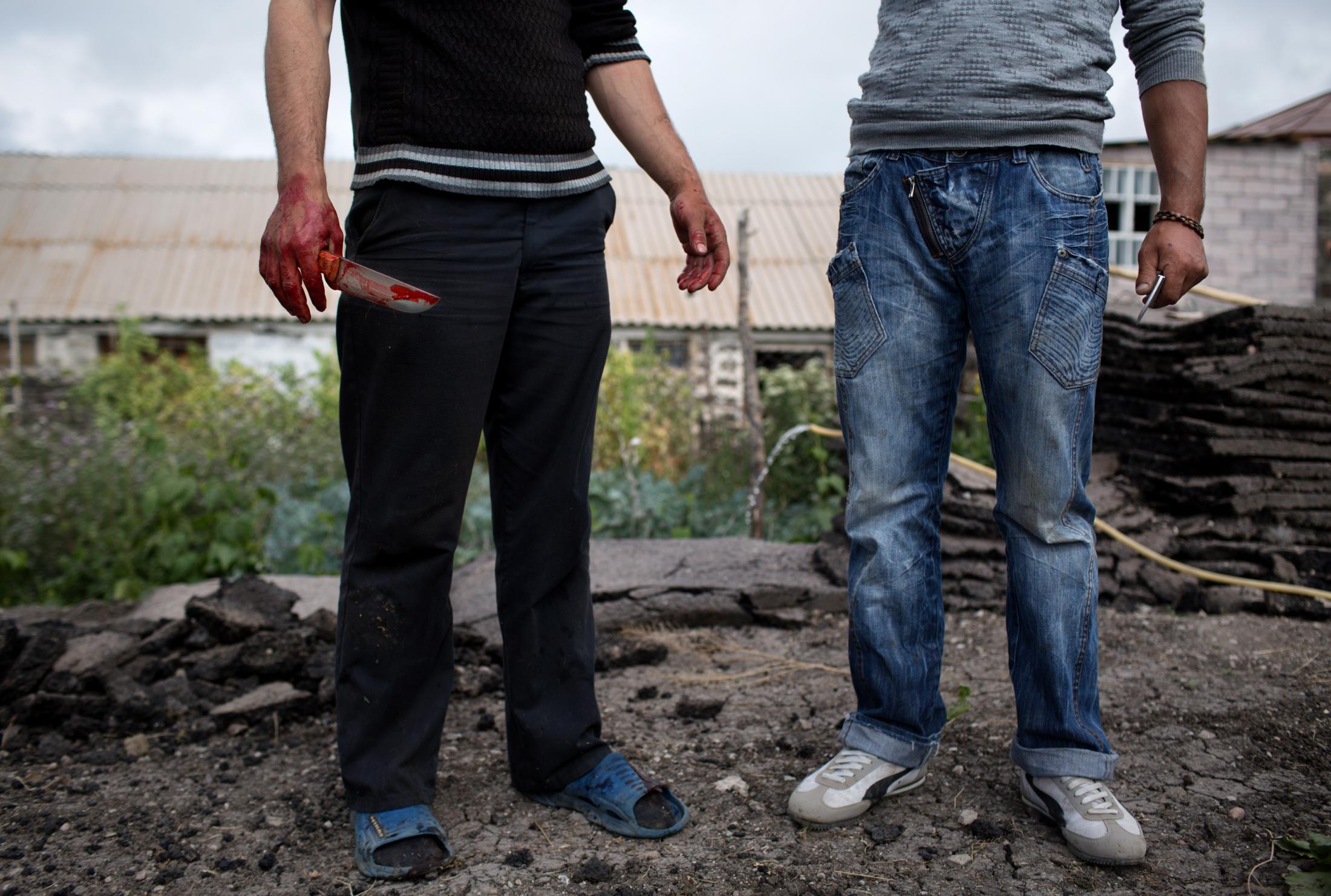 Two Muslim men hold knives that served to sacrifice a cow during the Eid al-Adha, which is also known as the Feast of Sacrifice or Festival of Sacrifice. This celebration serves as a reminder of when Ibrahim was willing to sacrifice his son to God, according to Islamic belief. 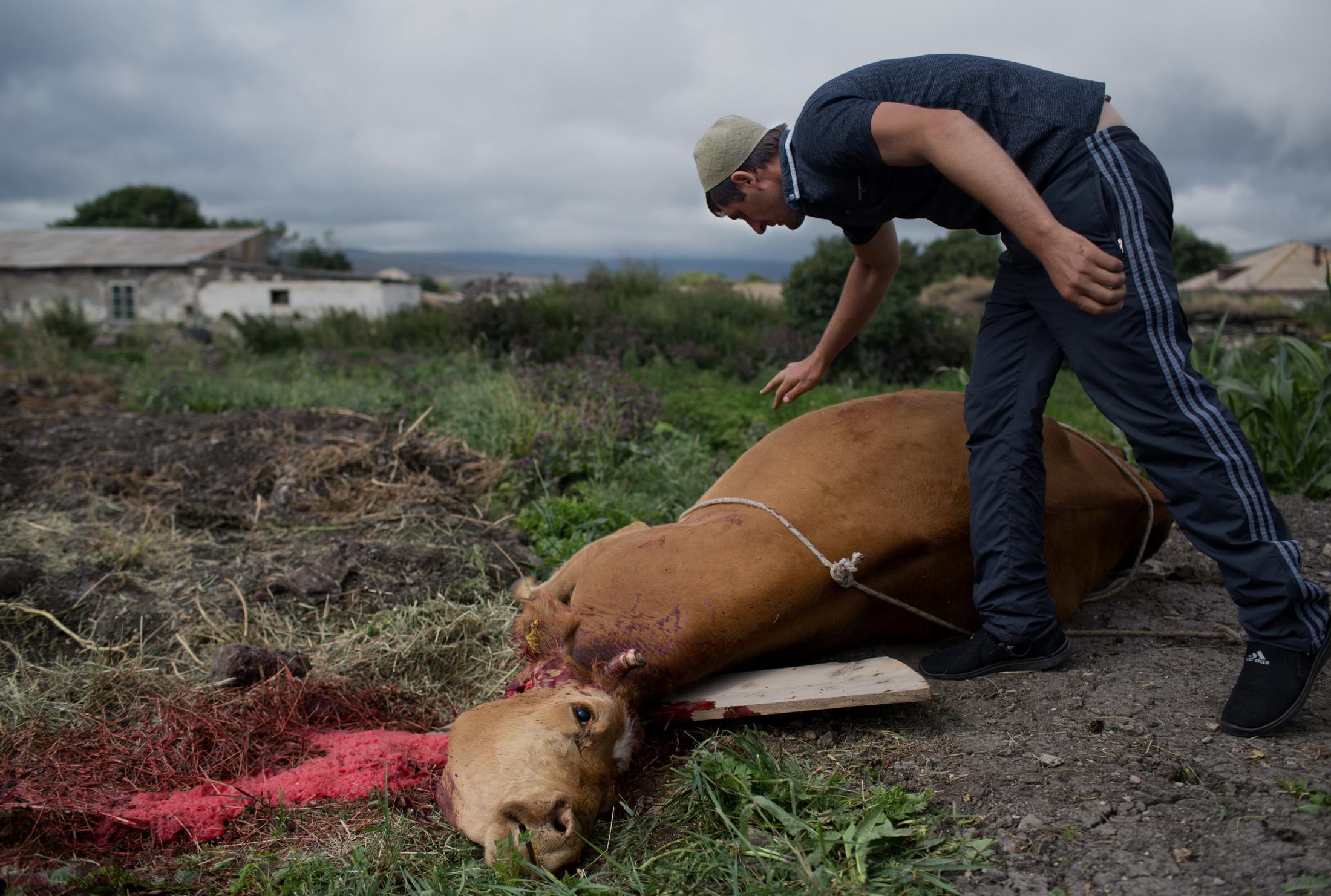 A cow was sacrificed during the Eid al-Adha, which is also known as the Feast of Sacrifice or Festival of Sacrifice. This celebration serves as a reminder of when Ibrahim was willing to sacrifice his son to God, according to Islamic belief. The cow's meat and byproducts are then distributed as gifts to people in the village. Every part of the cow is used for various purposes. 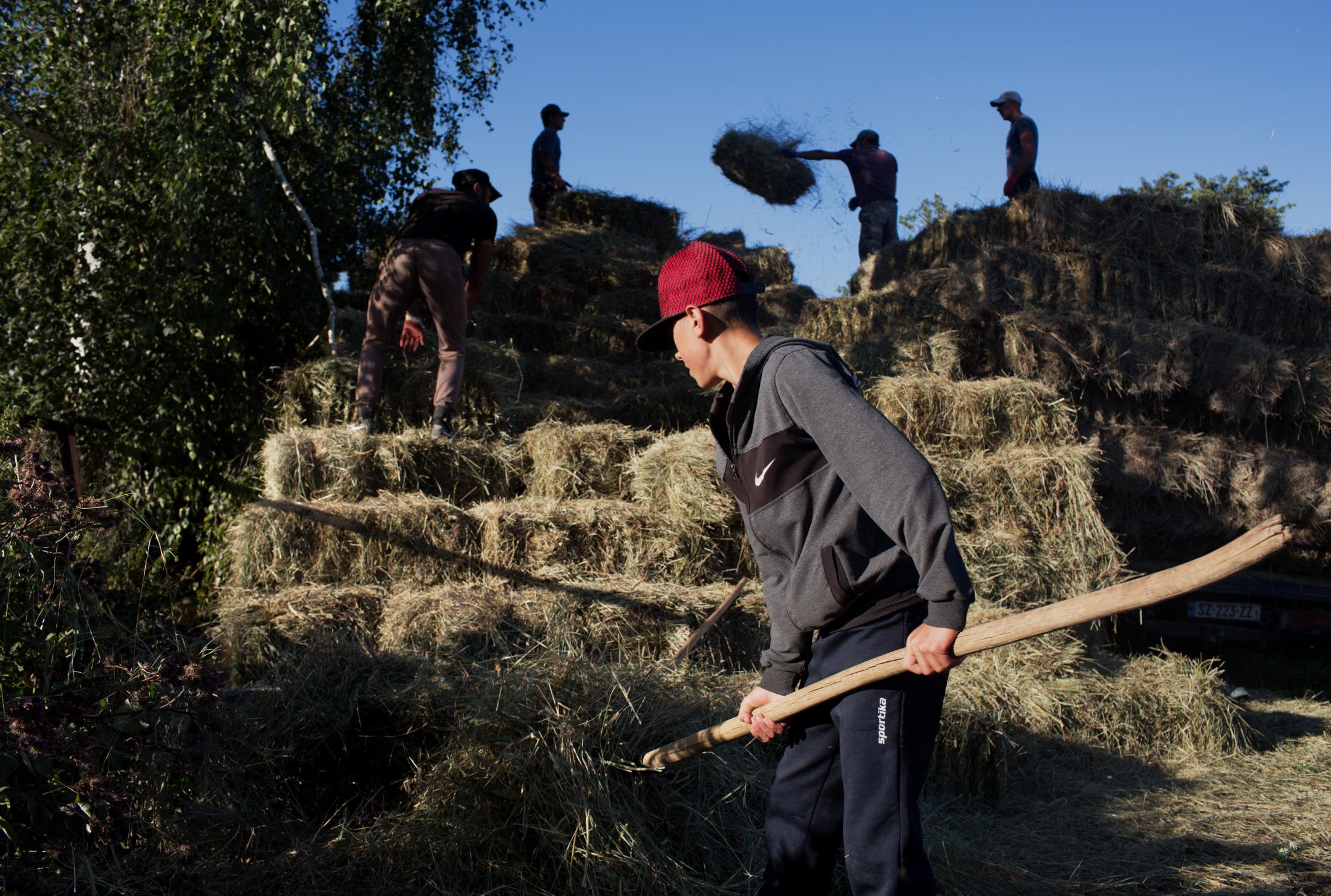 Georgian Christian teens pile bales of hay to be fed to animals during the long winter months. 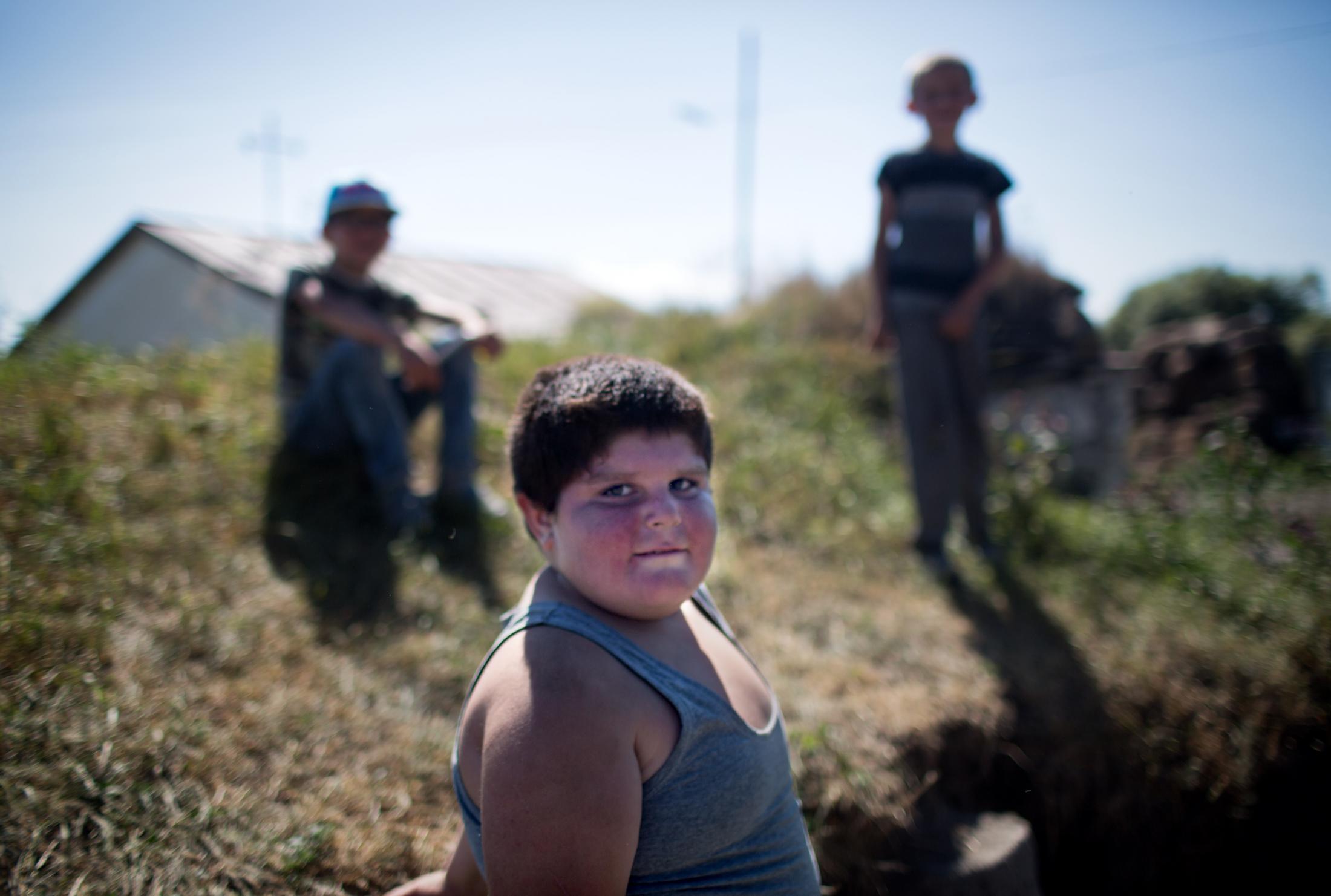 In July, children play outside all day long. For them, it does not matter who is Christian, who is Muslim and who is not. 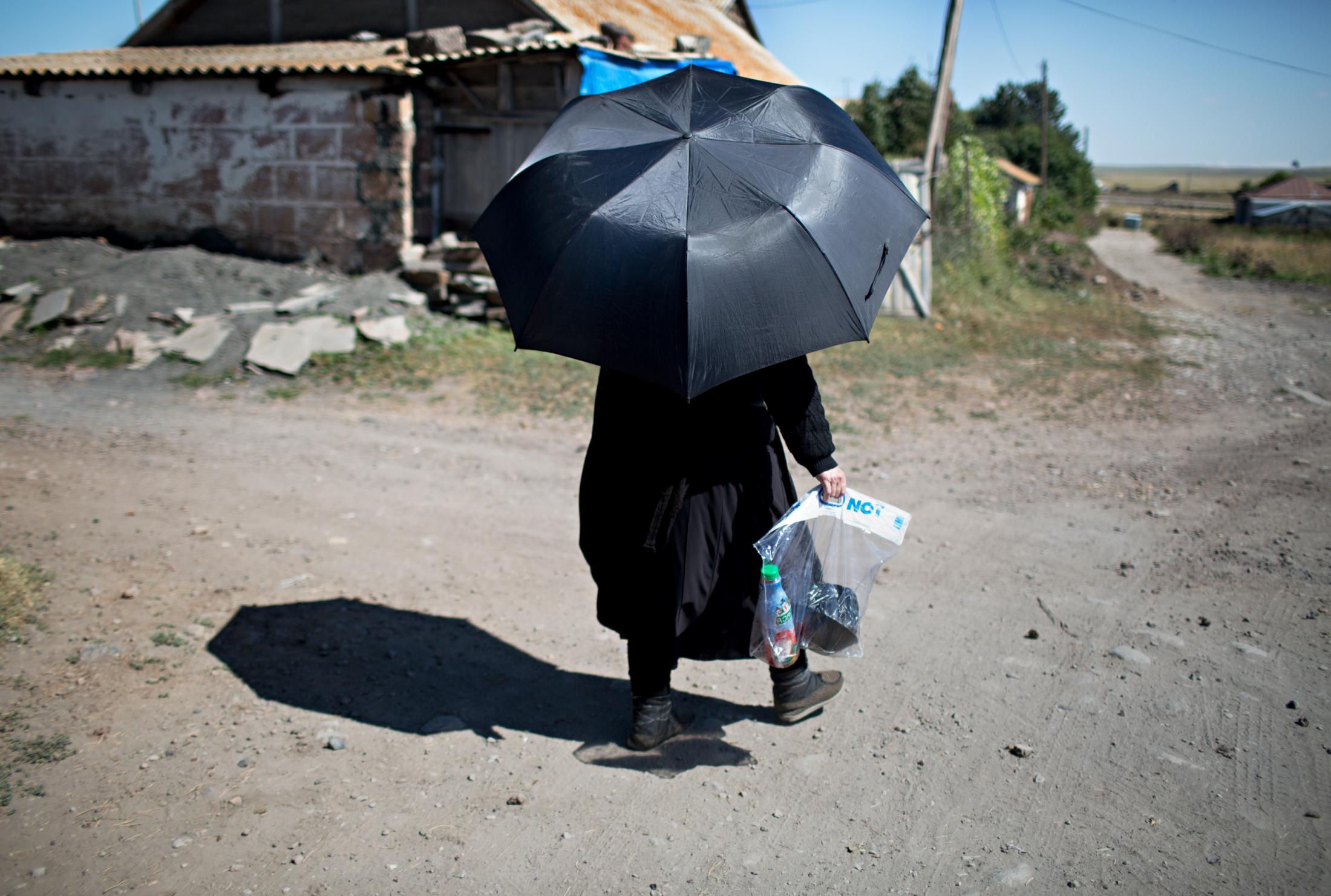 A Muslim woman returns from shopping while protecting herself against the sun with an umbrella. 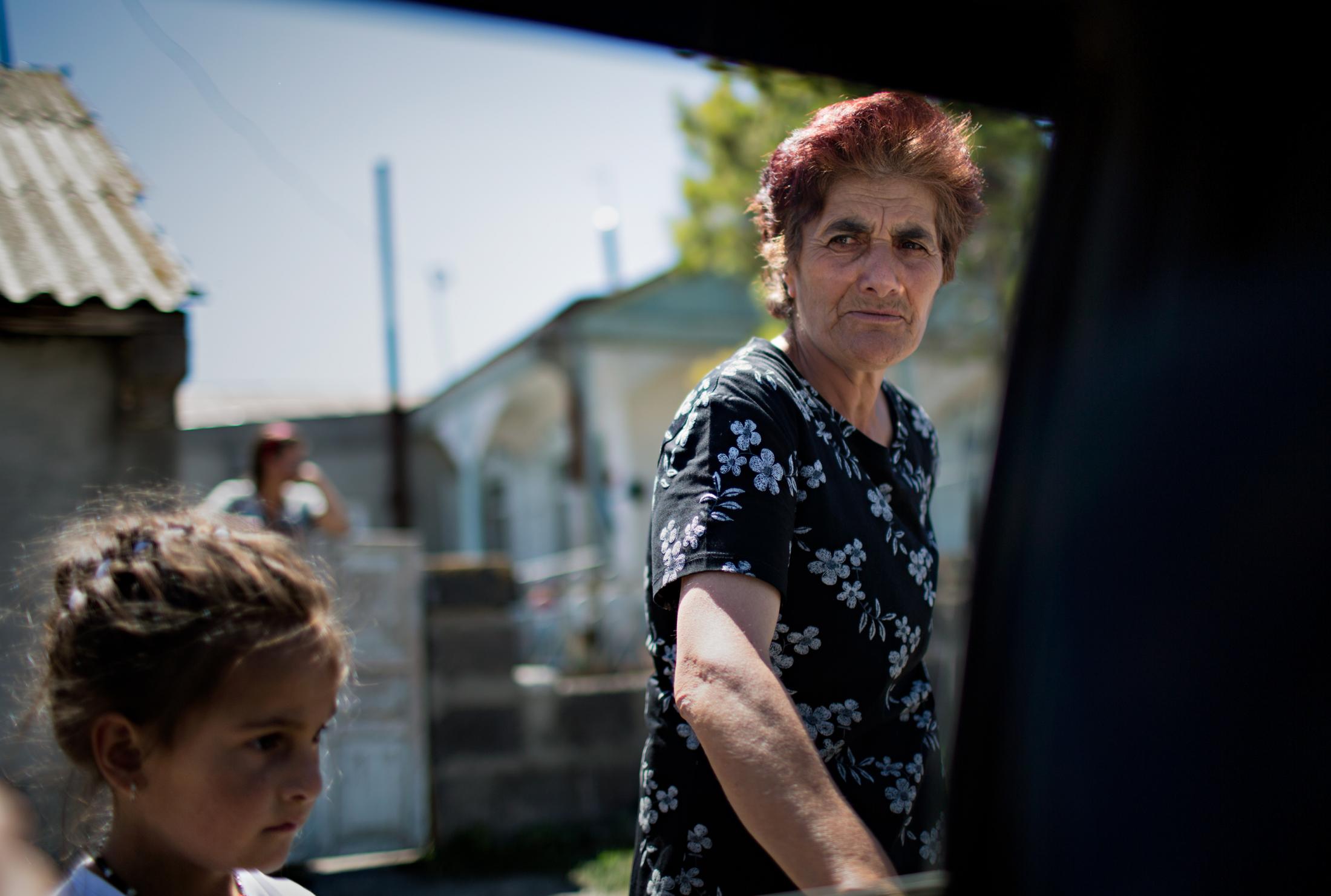 Georgian Christians woman and her children watch the ongoing on their street. 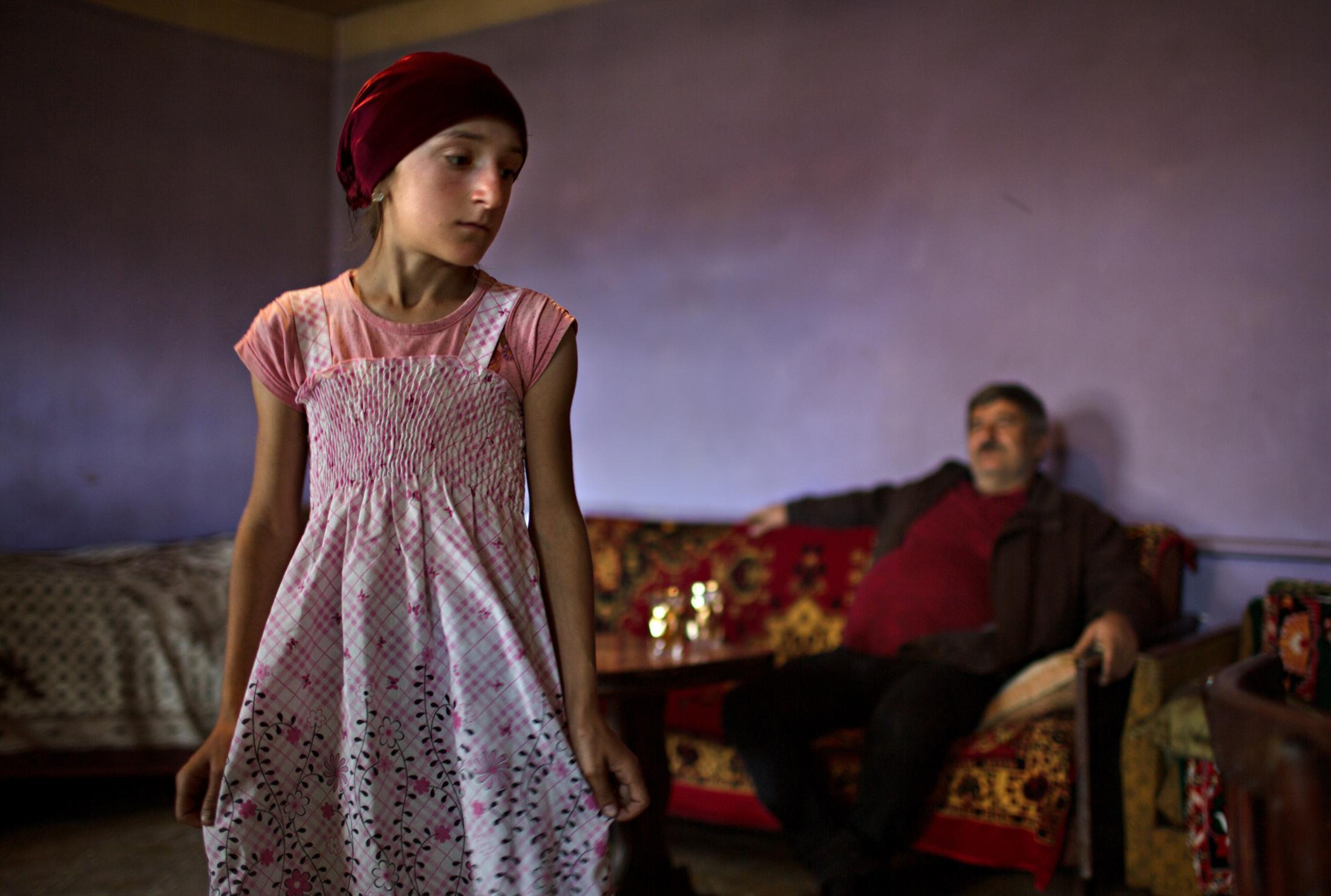 A young Muslim girl shows off her dress under the watchful eyes of her uncle. 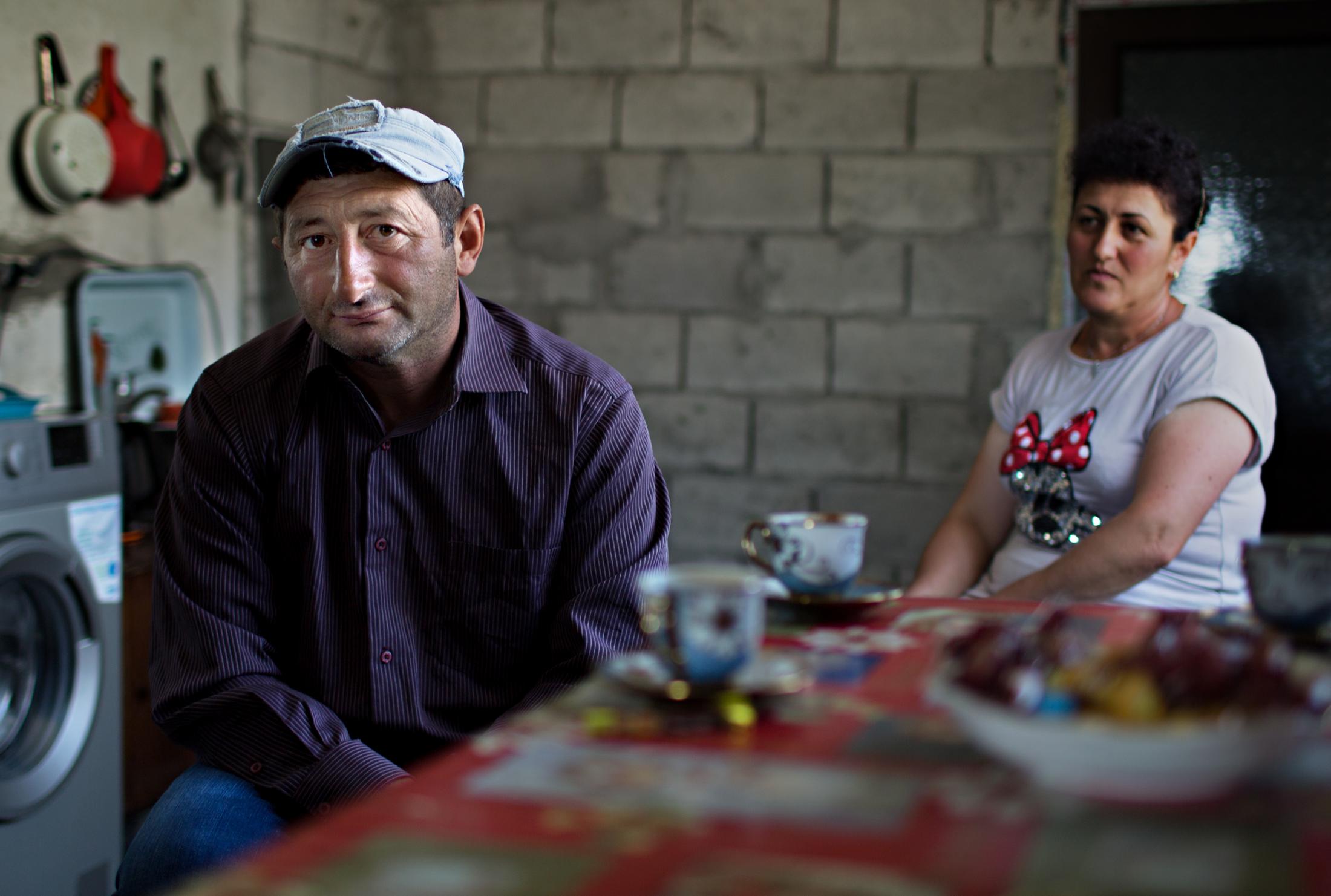 An Armenian husband and wife take a coffee break. 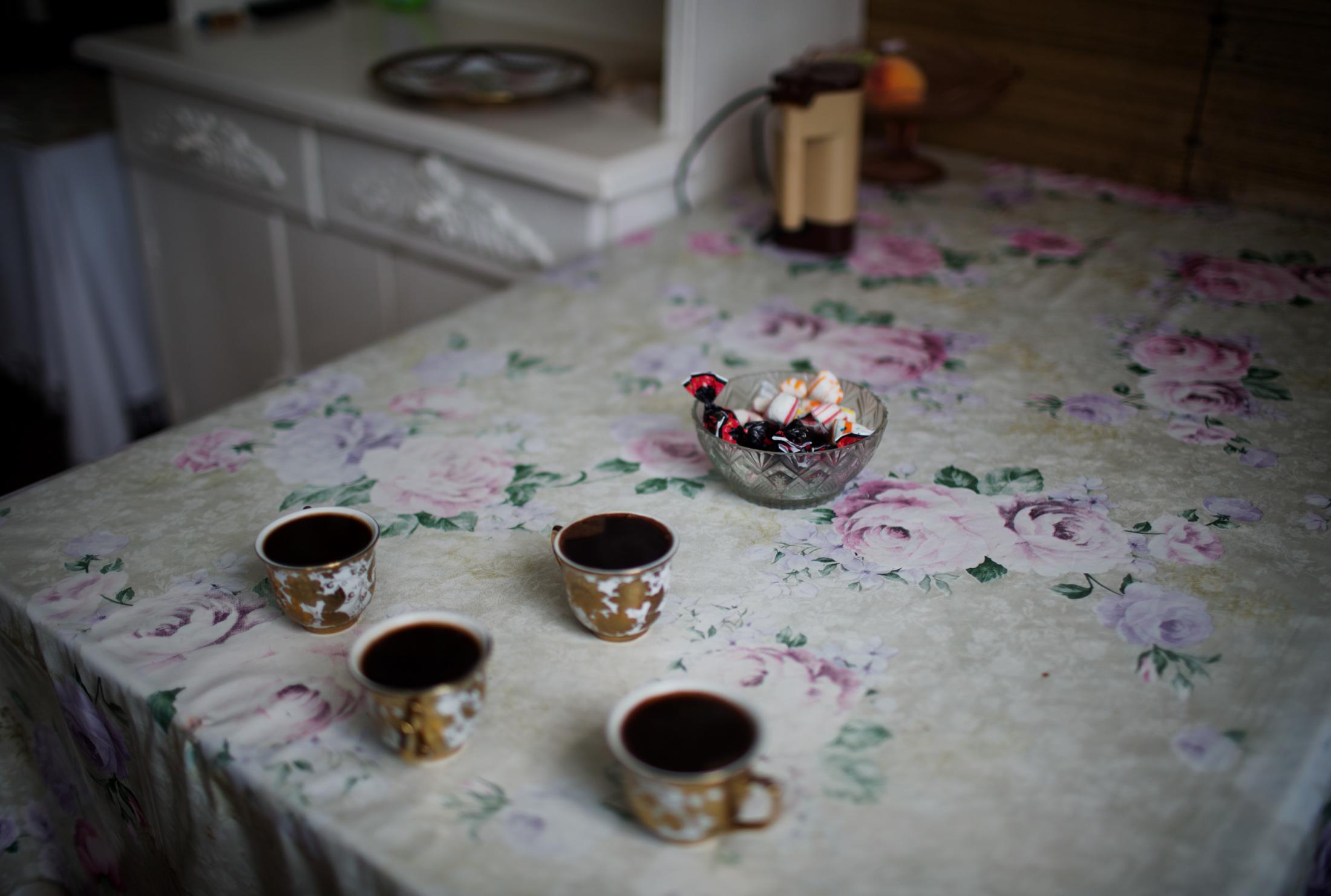 Hospitality and offer of a coffee break is omnipresent for visitors in Gorelovka. 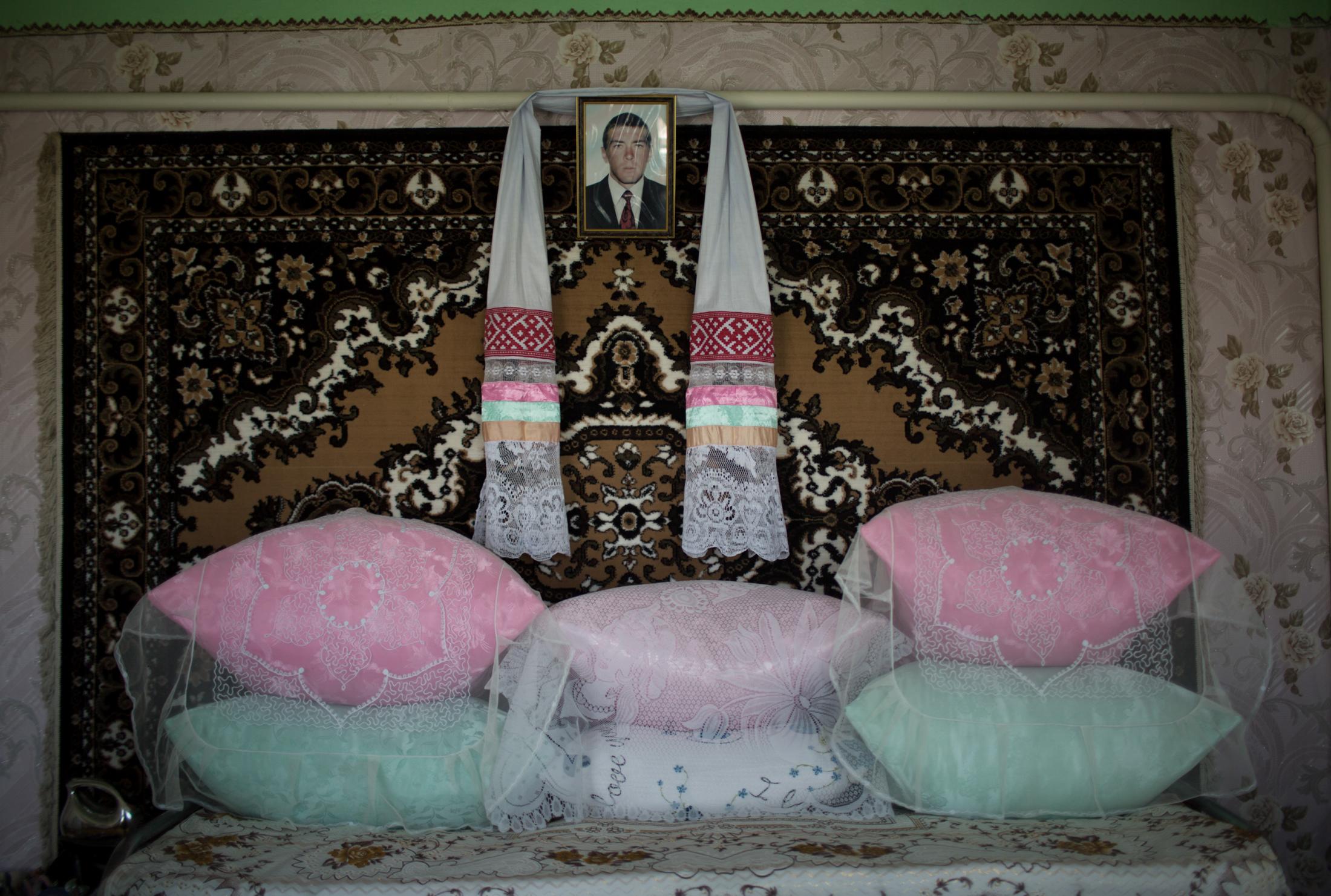 A shrine to a dead son can be seen in a Doukhobory's home. 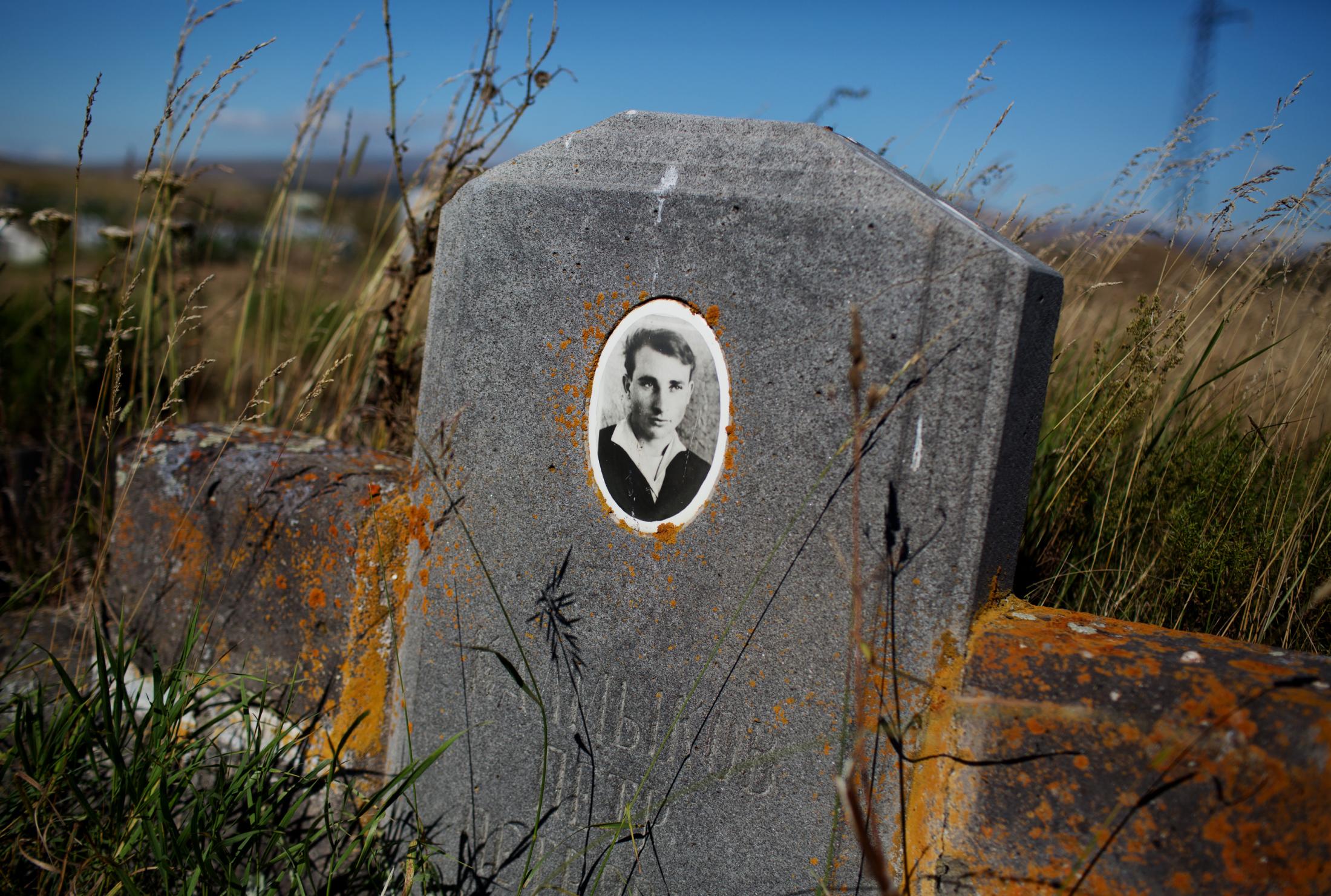 The local cemetery is where villagers bury their dead. The Muslims, however, are prohibited to bury their dead in the village cemetery and have to travel some 250 kilometers away to another cemetery. 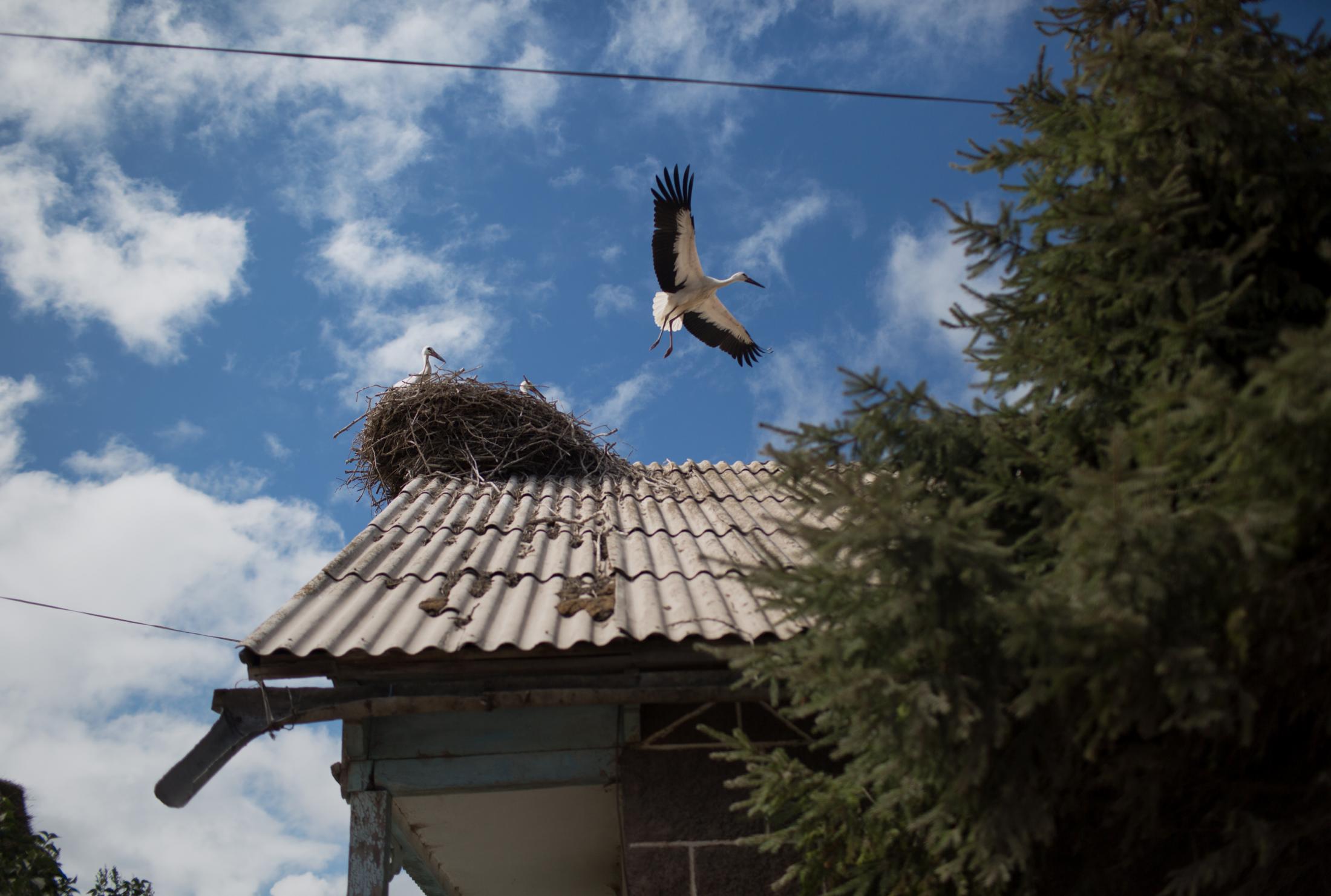 The fourth group that coexists in Gorelovka with everyone else is the storks who make their homes on many of the village's roofs and chimneys. 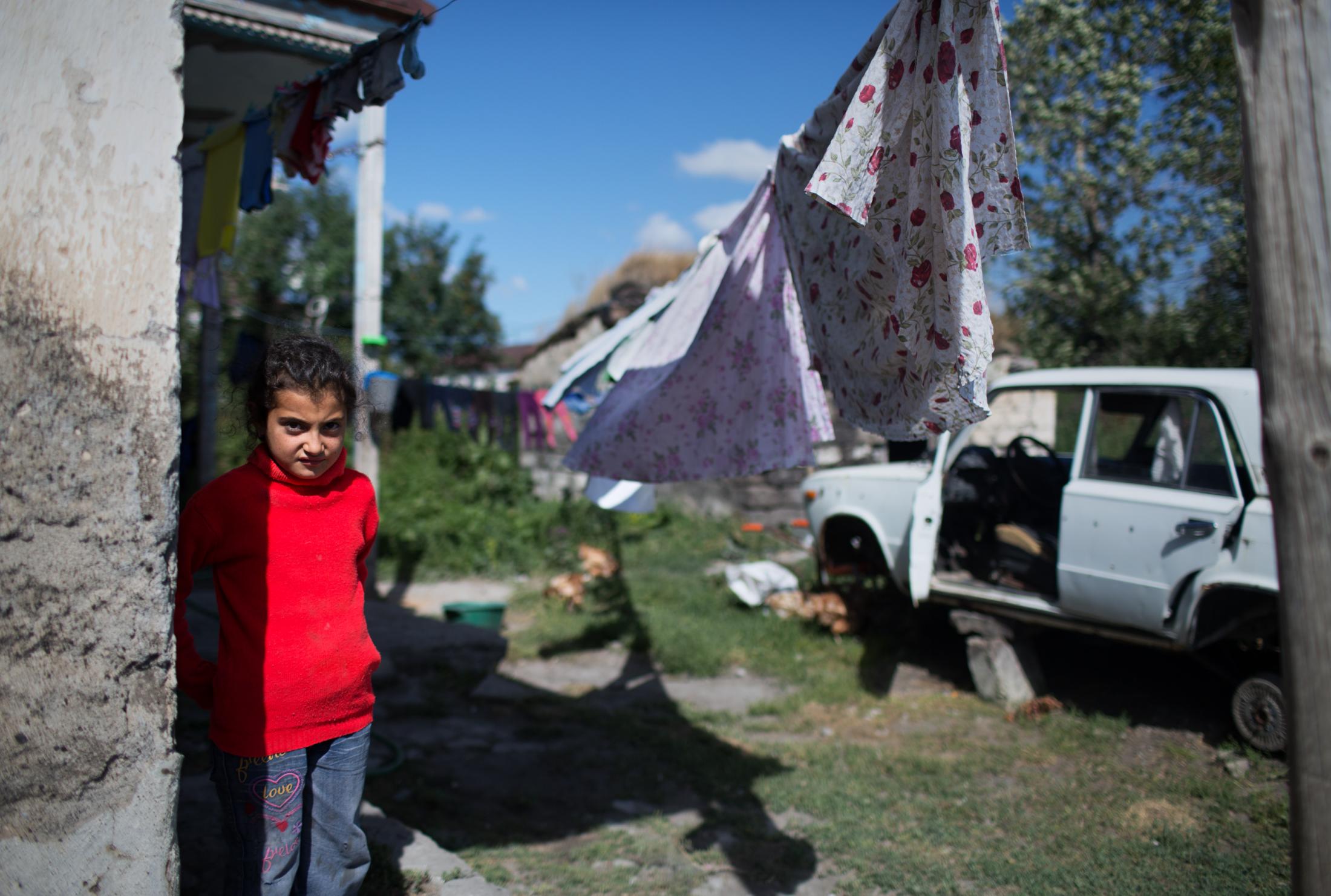 A young Muslim child looks on. 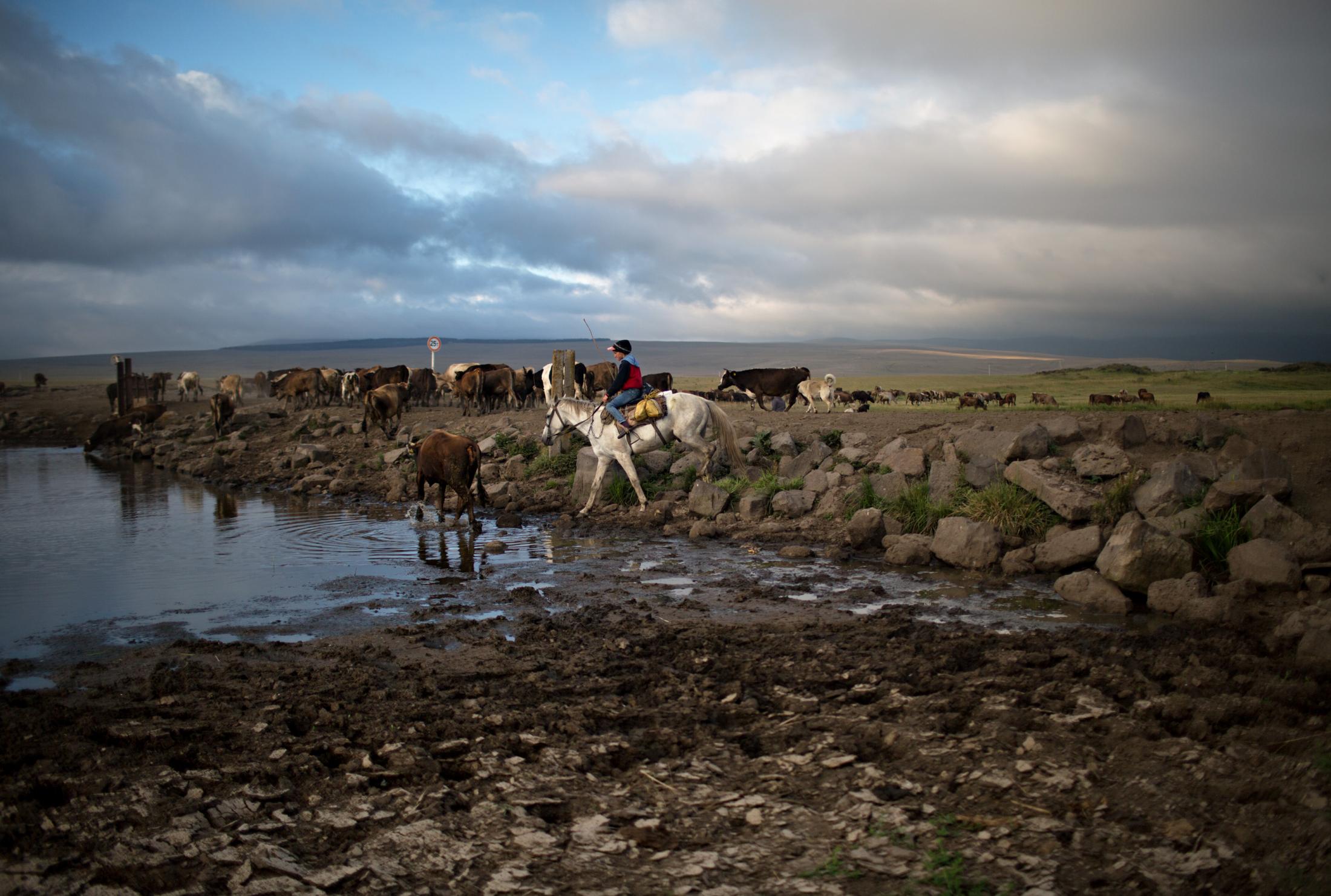 A Georgian rancher herd his cattle during the morning run towards the pasture. 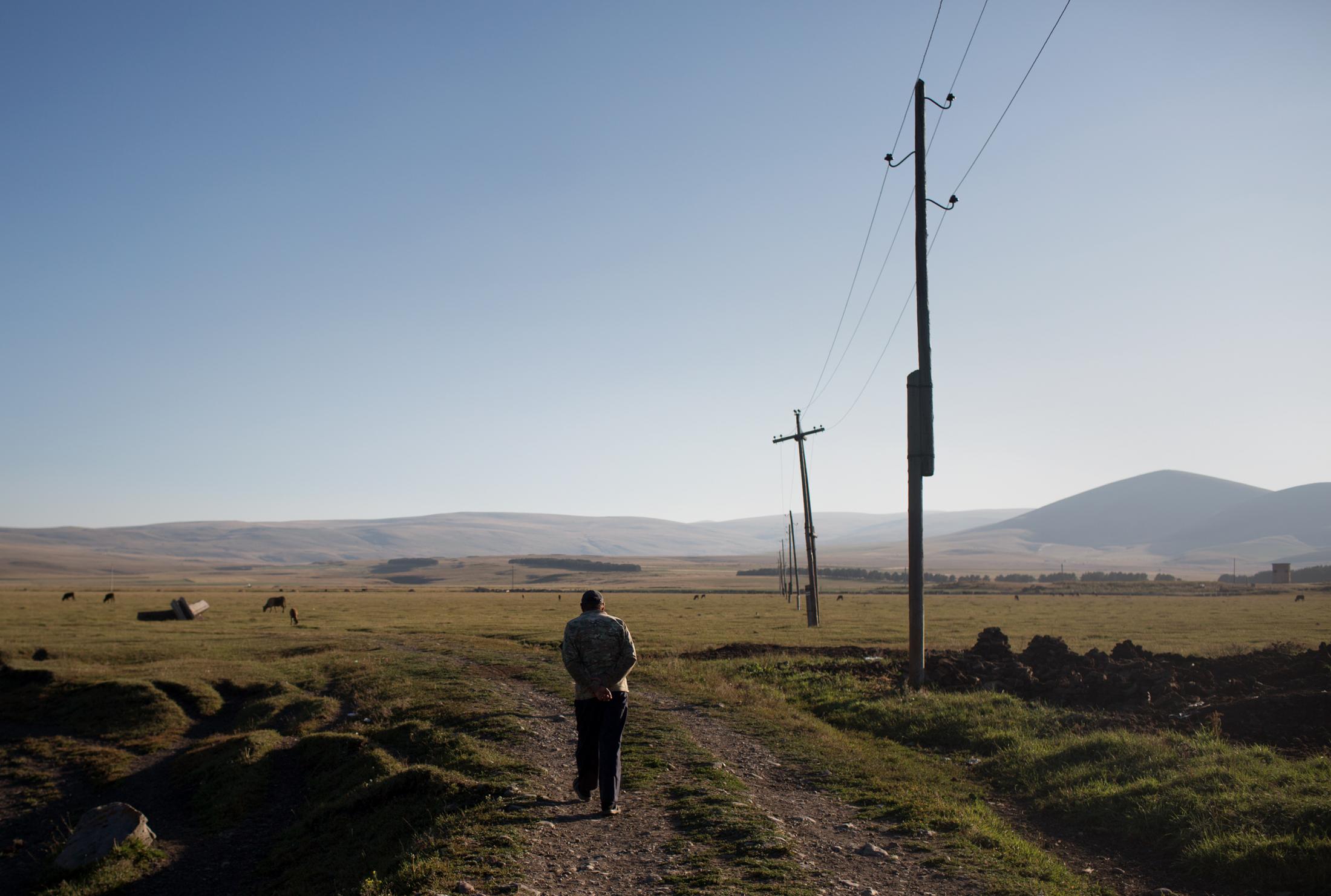 An old man walks on a dirt road.
"The mystery of human existence lies not in just staying alive, but in finding something to live for."
"The Grand Inquisitor" in Fyodor Dostoyevsky's The Brothers Karamazov (1879-1880)
Life in Gorelovka, a small village in southern Georgia about 10 kilometers (6 miles) from the Armenian border, is not easy. Not during the winter which lasts about seven months, nor during the rest of the year when the focus is preparing for winter. In July, however, Gorelovka is picturesque as great lush plains surround this small village of around 1000 people.

While the community is made up of those from different ethnic backgrounds - from Georgian refugees who have resettled this region after landslides destroyed their homes to relocated Muslims to the exiled Doukhobors - everyone faces the same concerns of survival relying on subsistence farming with very little commerce.  Despite the difficulty of everyday life and ethnic diversity, life is peaceful.

Gorelovka was founded in the 1840’s by the Doukhobors: a group of Christian Russians exiled to the region by Tsar Nicholas I.  They were exiled after burning their weapons of war, rejecting the Russian Orthodoxy, and - as pacifists - refusing to join the army or fight in any wars. The Doukhobors believe in peaceful coexistence with nature. Their approach to Christianity is conceptual in that they “internalize the words and conduct of God as portrayed in the Bible and by Jesus Christ to create a set of characters by which to act.” It is said that Leo Tolstoy helped many relocate to Canada where a large population of Doukhobors live today, while a minority of Doukhobors live in Georgia, Ukraine and other neighbor countries. When they came to Georgia, they built homes putting sand from the nearby lake on their roofs to keep warm, and painted their homes in joyful hues of white, blue and green as they created a communal living environment in this harsh region.
After the collapse of the Soviet Union, non-Doukhobors began moving into the area. With the rise of nationalism and the arrival of Georgians into villages such a Gorelovka, the Doukhobors were no longer welcome - many moved away but a handful still remain.

Nearby Armenians also began moving into the region in good numbers and now wield a great deal of influence. In response to this influence and frustrated by the self-proclaimed independence in the Abkhazia region in the north of Georgia, the Georgian government promotes ethnic diversity by encouraging Muslims to settle abandoned homes in Gorelovka.  The plan appears to be that by diversifying the ethnic blend of the region, the Armenians will be less likely to want to follow the example in Abkhazia and declare their independence or worse yet: get annexed by their Armenian neighbors.

The Muslims who inhabit abandoned structures in the village, farm the land and live peacefully with everyone else. One notable separation however remains in the community: the Muslims are prohibited to bury their dead in the village cemetery forcing them to travel some 250 Kilometers (155 Miles) to the nearest Muslim cemetery.

As a result of various world events paths crossed and lives were changed.  The diverse people of Gorelovka have live in a harsh environment, surrounded by stunning scenery sliced by dilapidated roads.