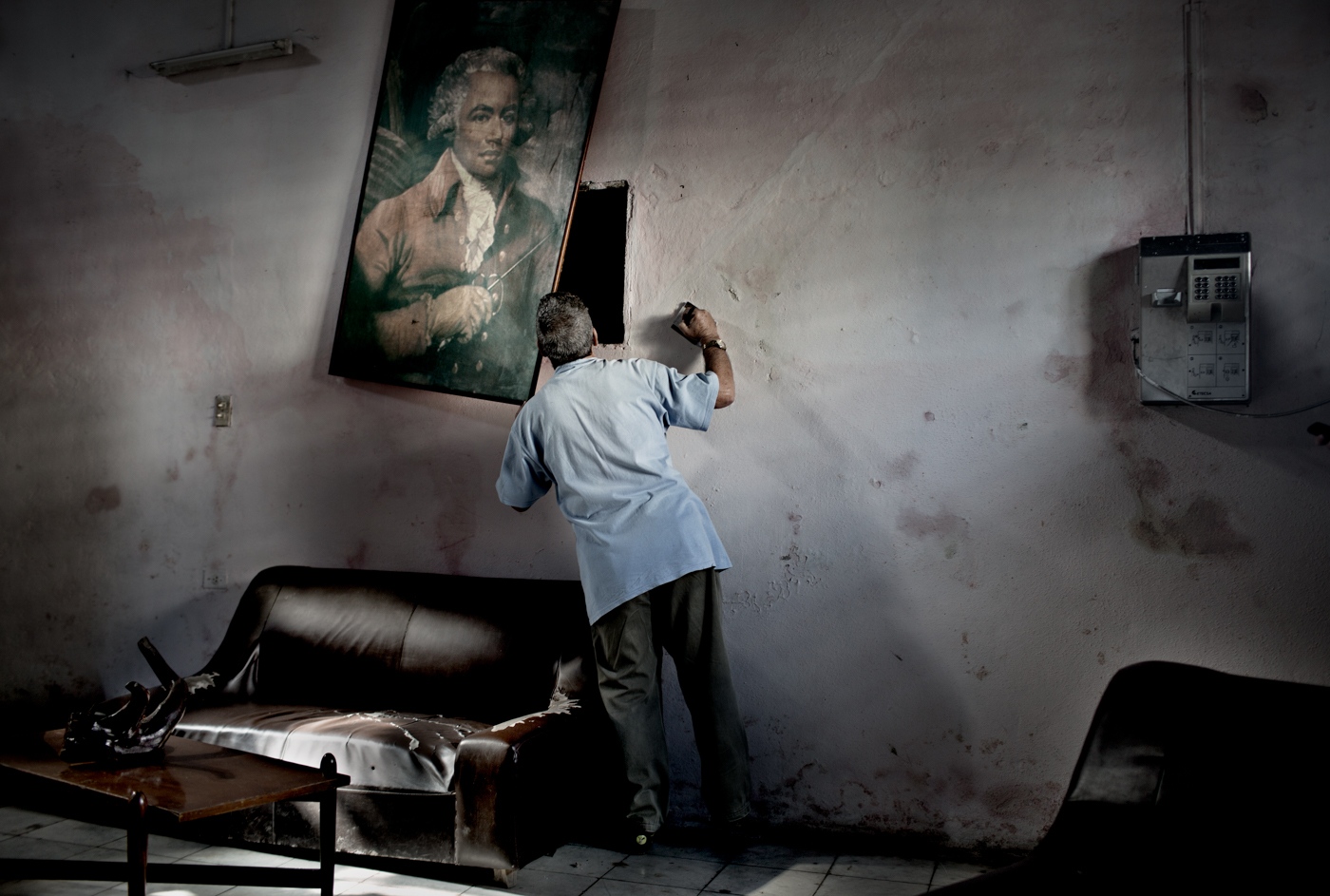 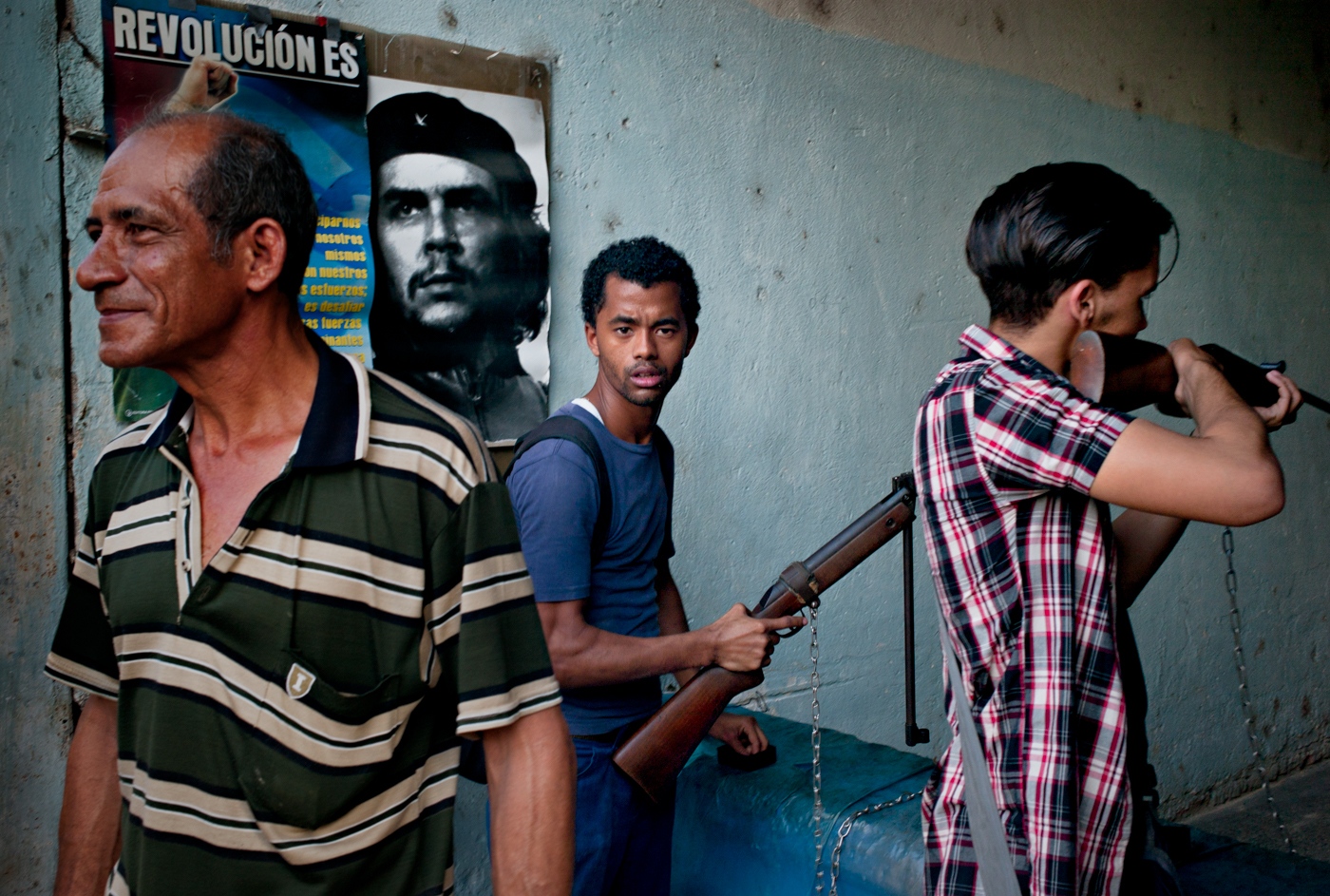 Since the relaxing of the laws regarding entrepreneurship, may Cubans have engaged in various businesses. Young men shoot pellet guns at a makeshift stand in a Havana street. 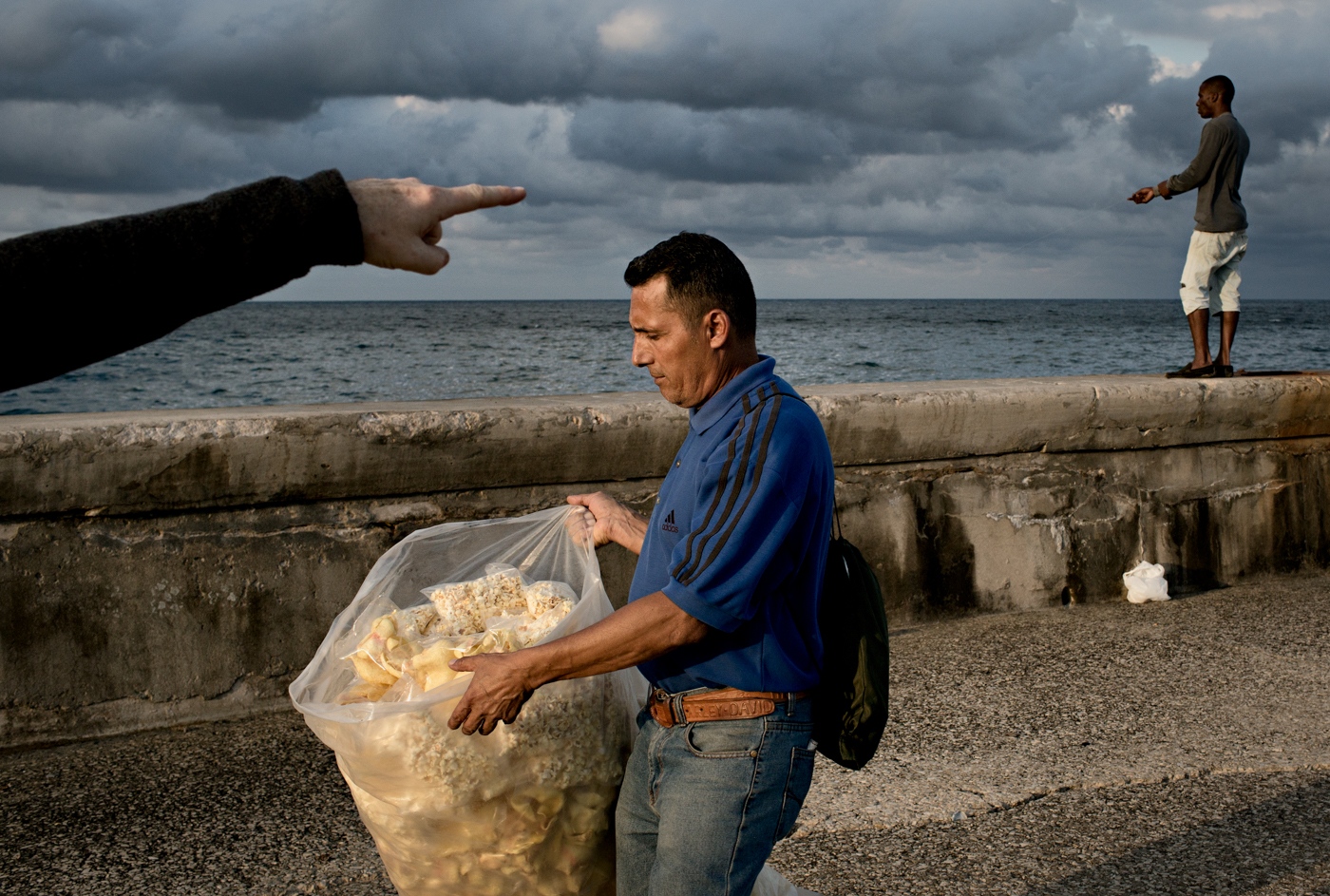 A man sells homemade popcorn to tourists, lovers and fishermen on The MalecÃ³n. The MalecÃ³n (sea wall) was first built in 1901 and then was expanded. The main purpose of it was to protect the City from the ocean waters-aside from that, it now is a major promenade space for families, lovers, prostitutes and fishermen. 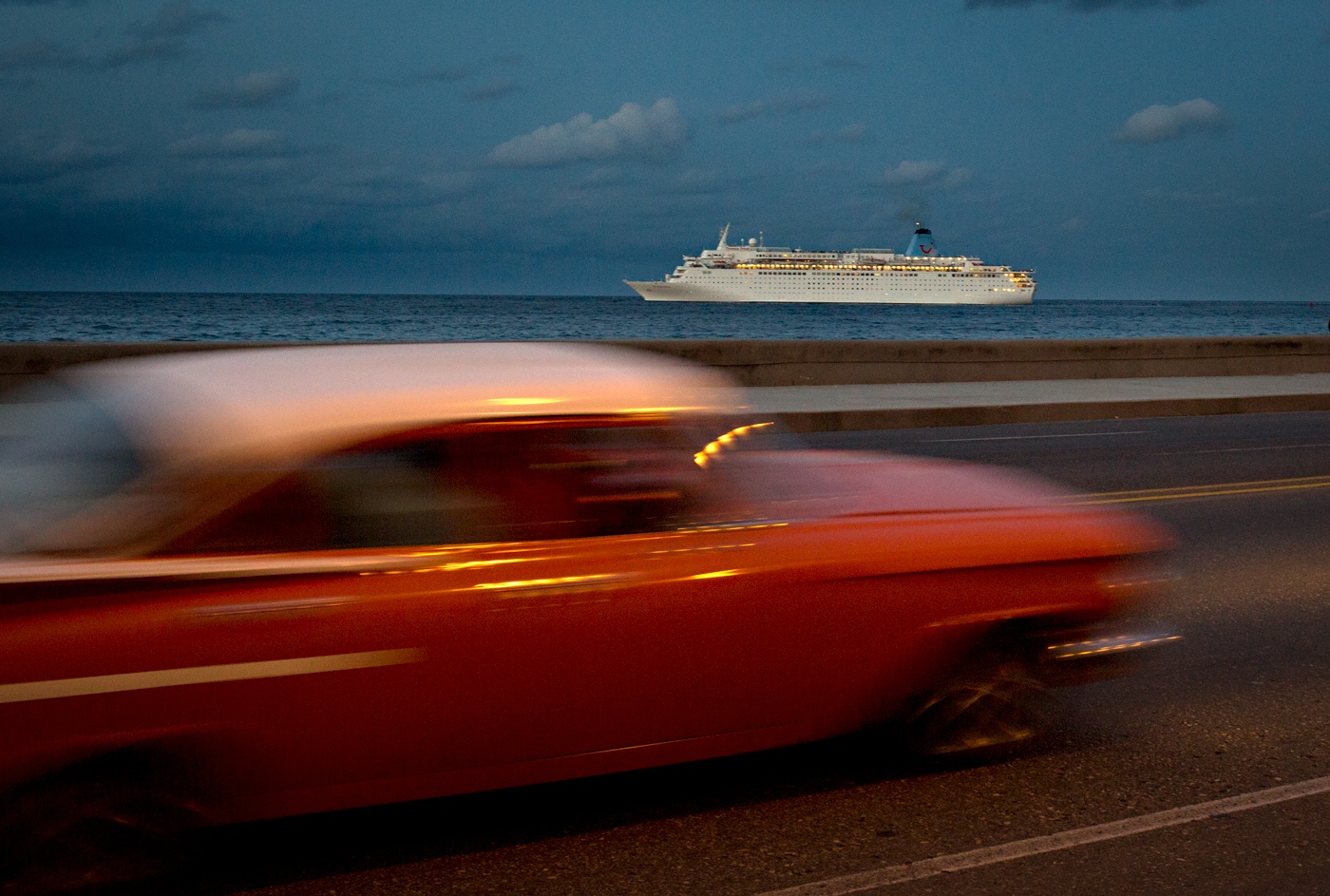 A luxury cruise ship navigates its way slowly in Havana waters passing in front of The MalecÃ³n. The MalecÃ³n (sea wall) was first built in 1901 and later was expanded. The main purpose of it was to protect the City from the ocean waters-but aside from that, it now is a major promenade space for families, lovers, prostitutes and fishermen. 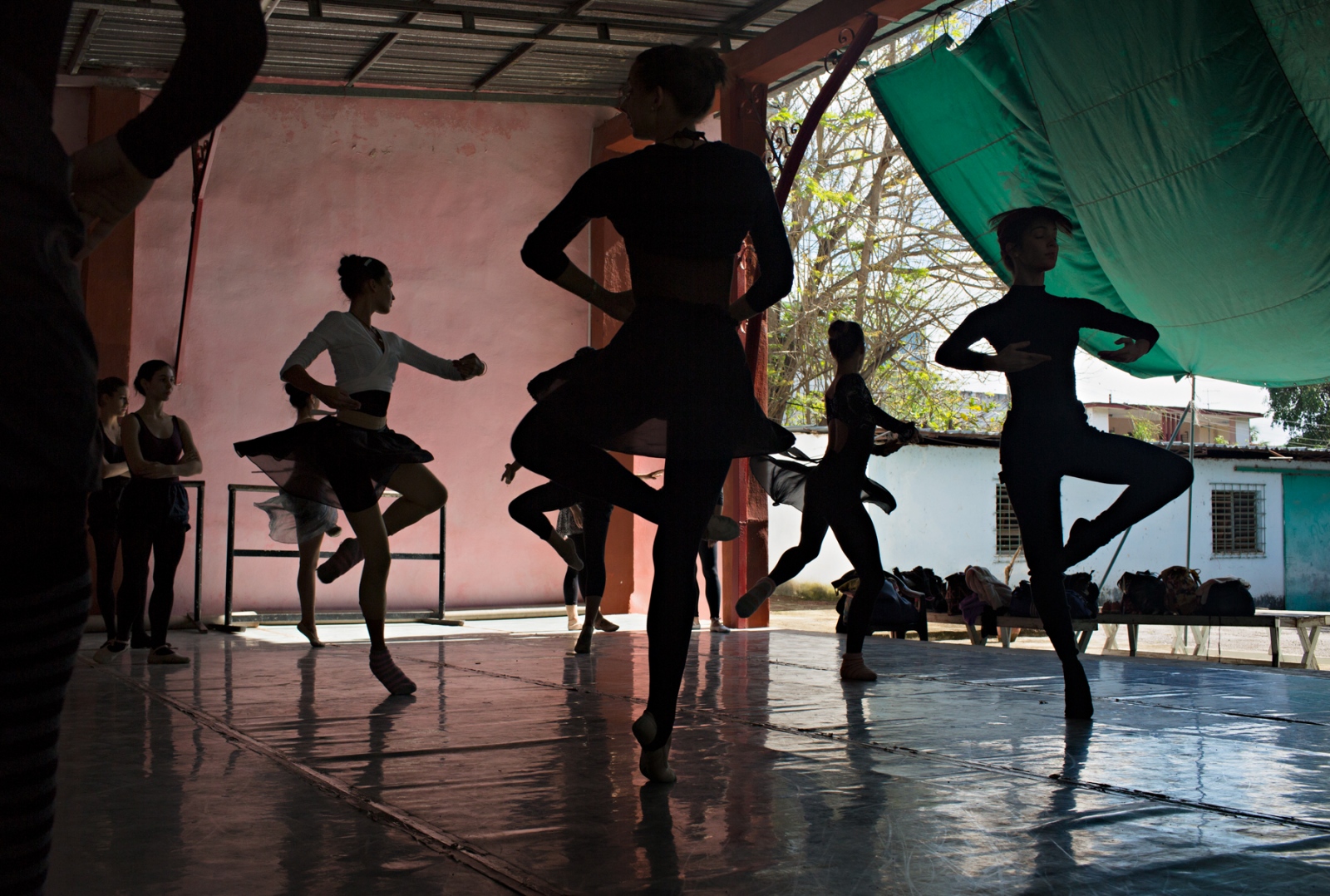 At the rehersal. Laura Alonso Academy is an offset of the National Ballet. To date, most of its graduates have defected to various countries outside of Cuba. The Academy functions mostly on donations as the funds for the arts are mostly spent on the National Ballet. 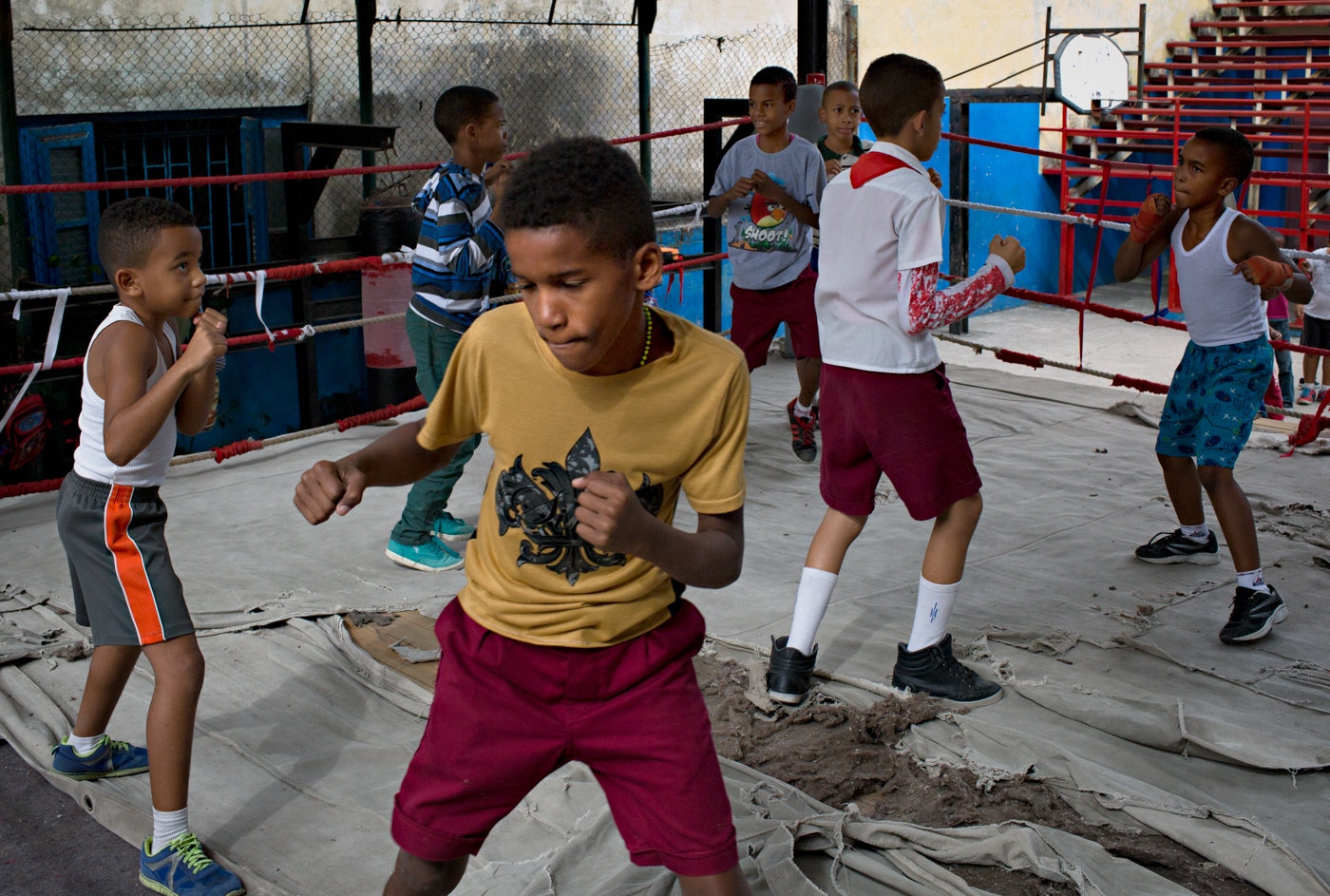 Rafael Trejo Boxing Gym is the oldest functioning boxing gym in Havana and hosts children after school for boxing training. As other facilities, they mostly function on donations from the public. 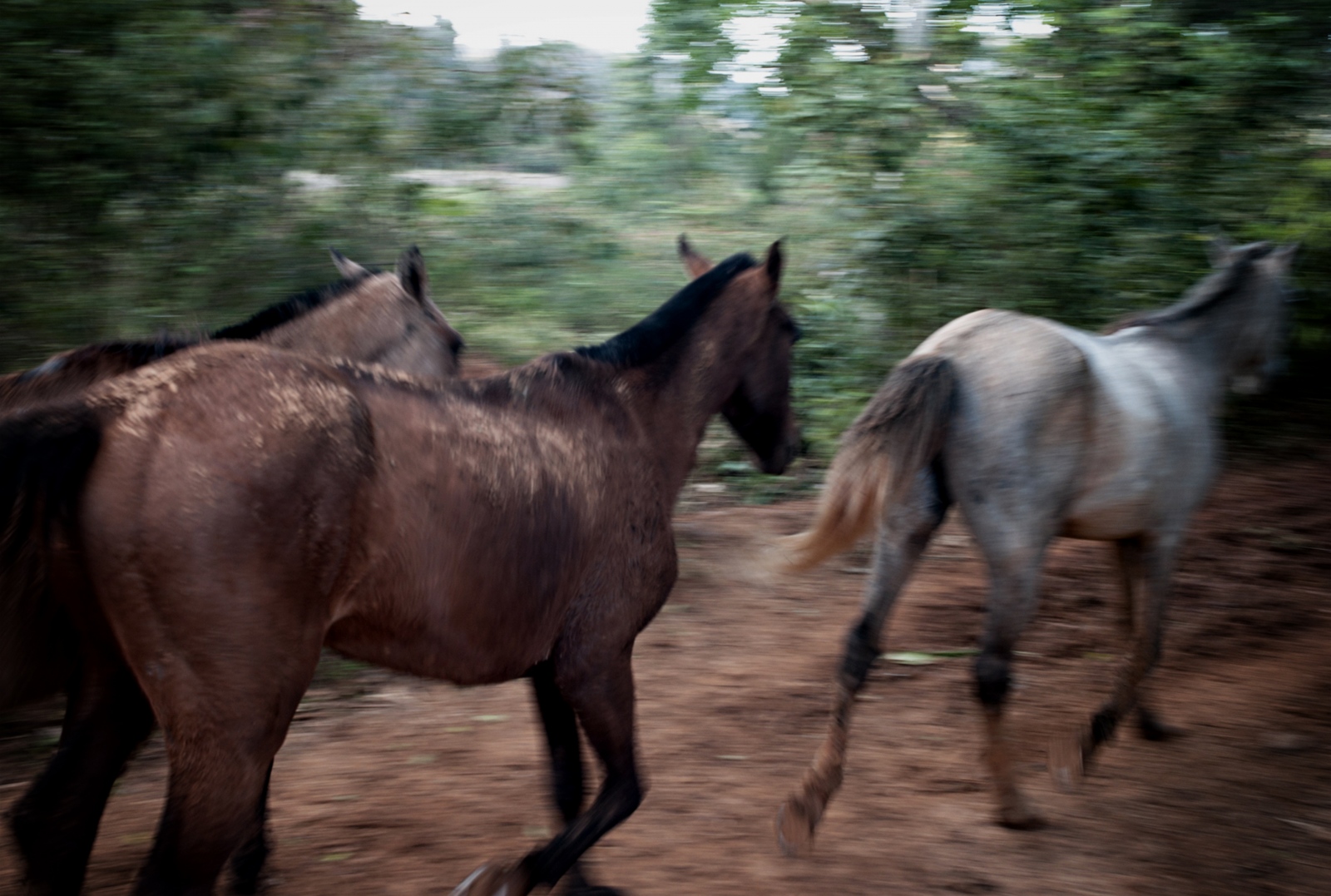 A herd of horses run through a trail in the tobacco fields in Vinales, a farming village two hour drive from Havana. 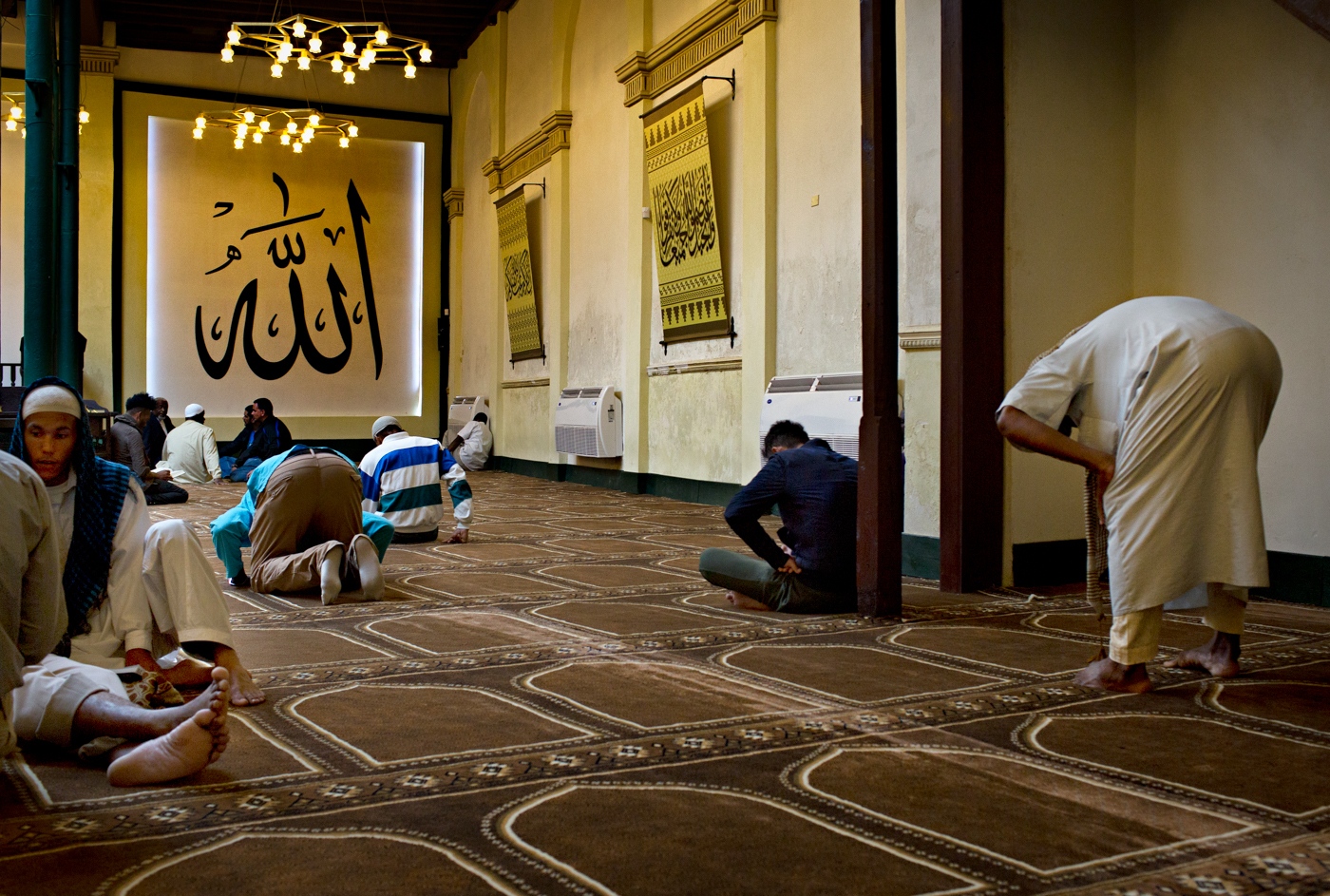 All three major religious faiths (Christianity, Judaism and Islam) are represented in Cuba. The Havana Mosque was funded by the Gulf Countries and is open only to Muslims for a Friday Prayer. 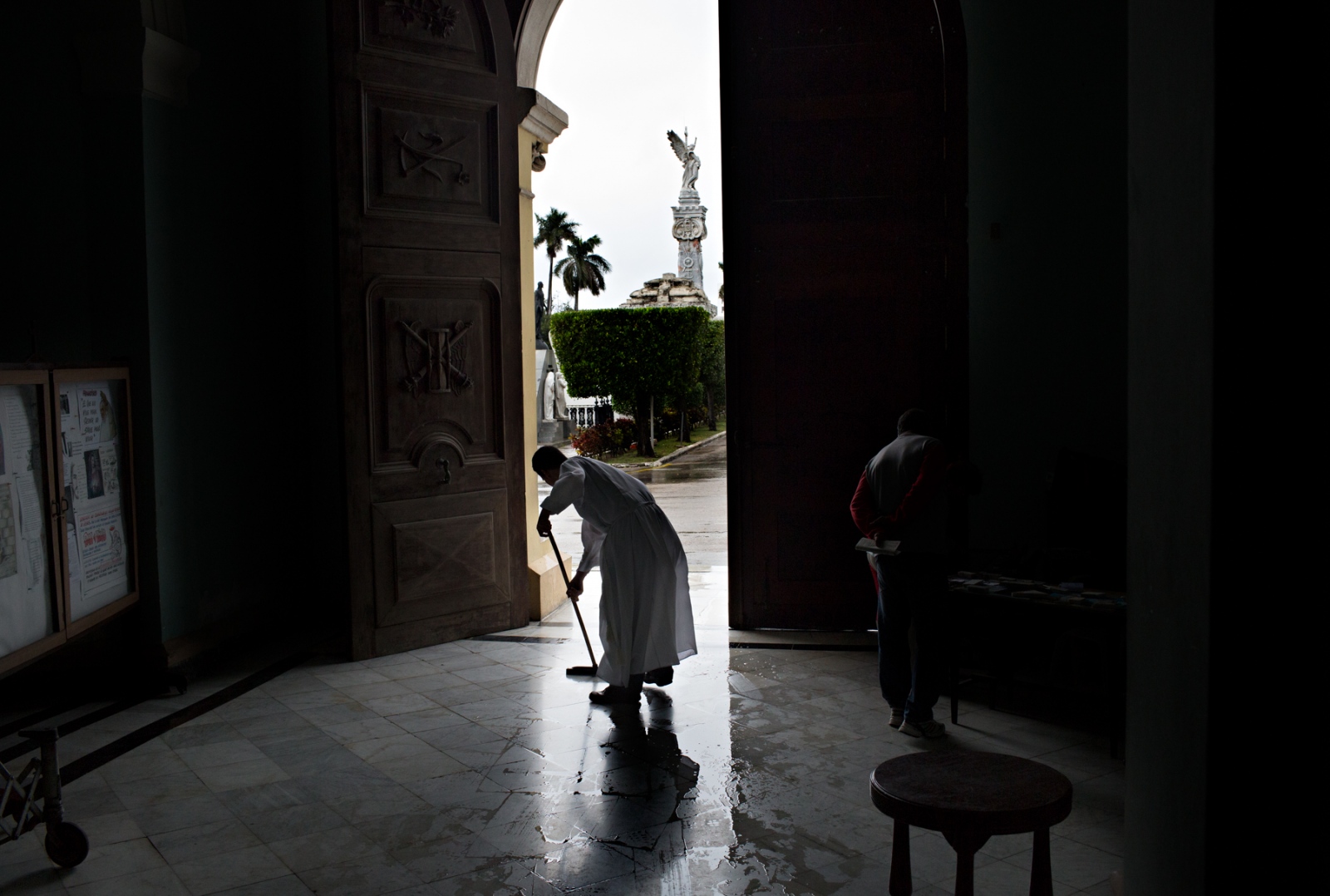 A priest at the Colon Cemetery's parish cleans water parishioners have tracked in before beginning the morning mass. Colon Cemetery is the largest cemetery in Havana. 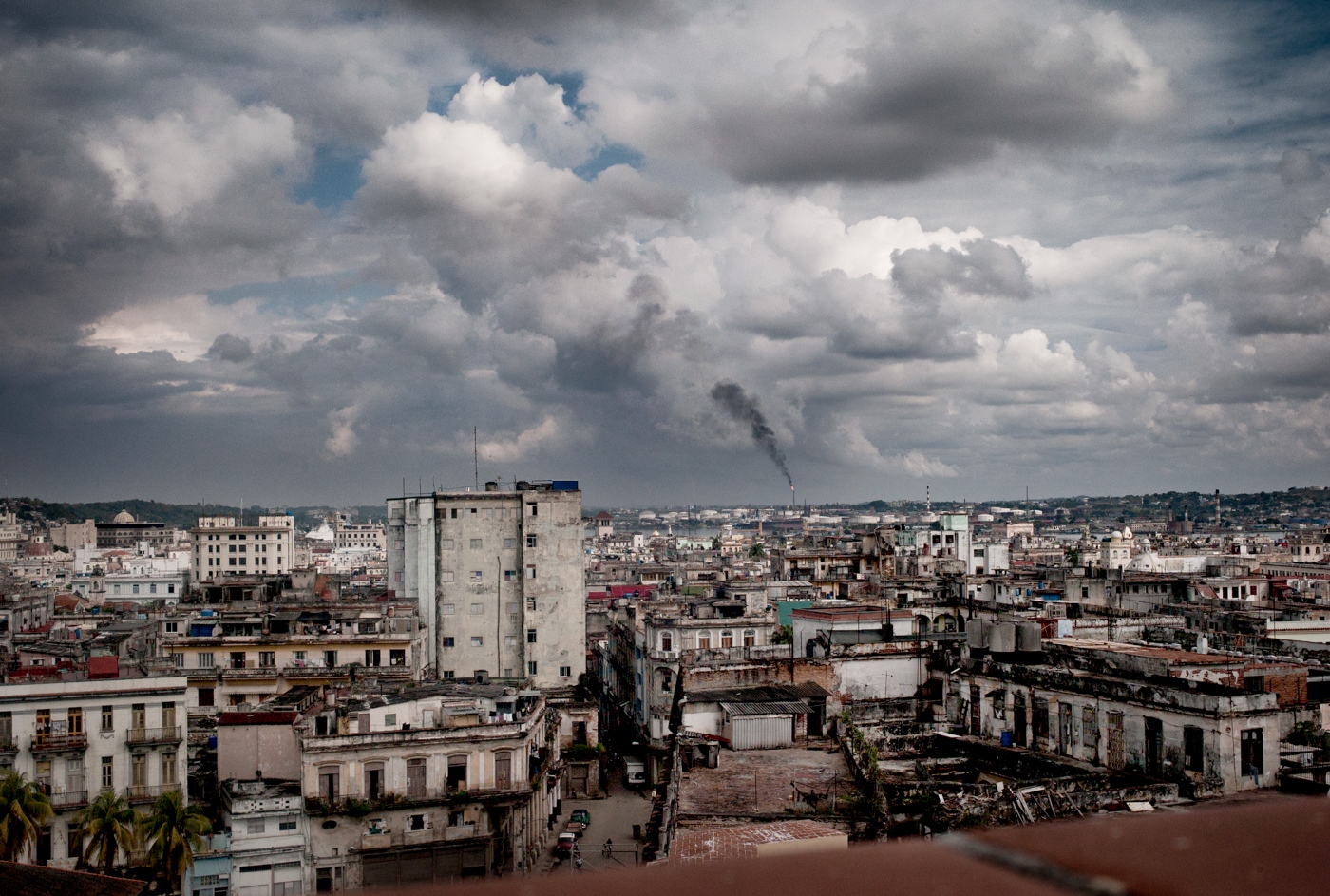 View of Havana skyline with Ã‘ico Lopez gasoline refinery's flame burning near the Havana Harbor in the distance. 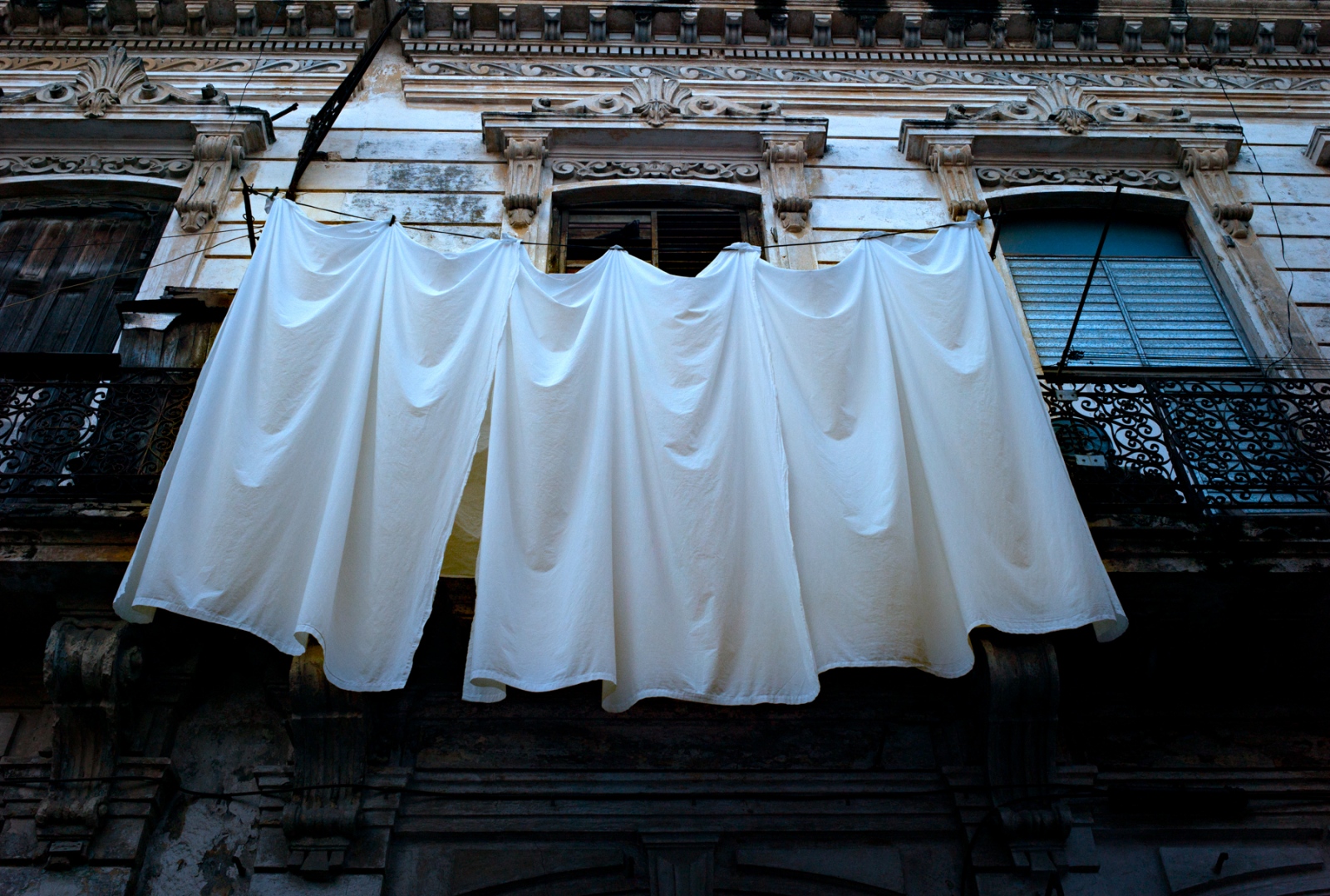 Sheets hung to dry outside of an apartment's window in Havana. 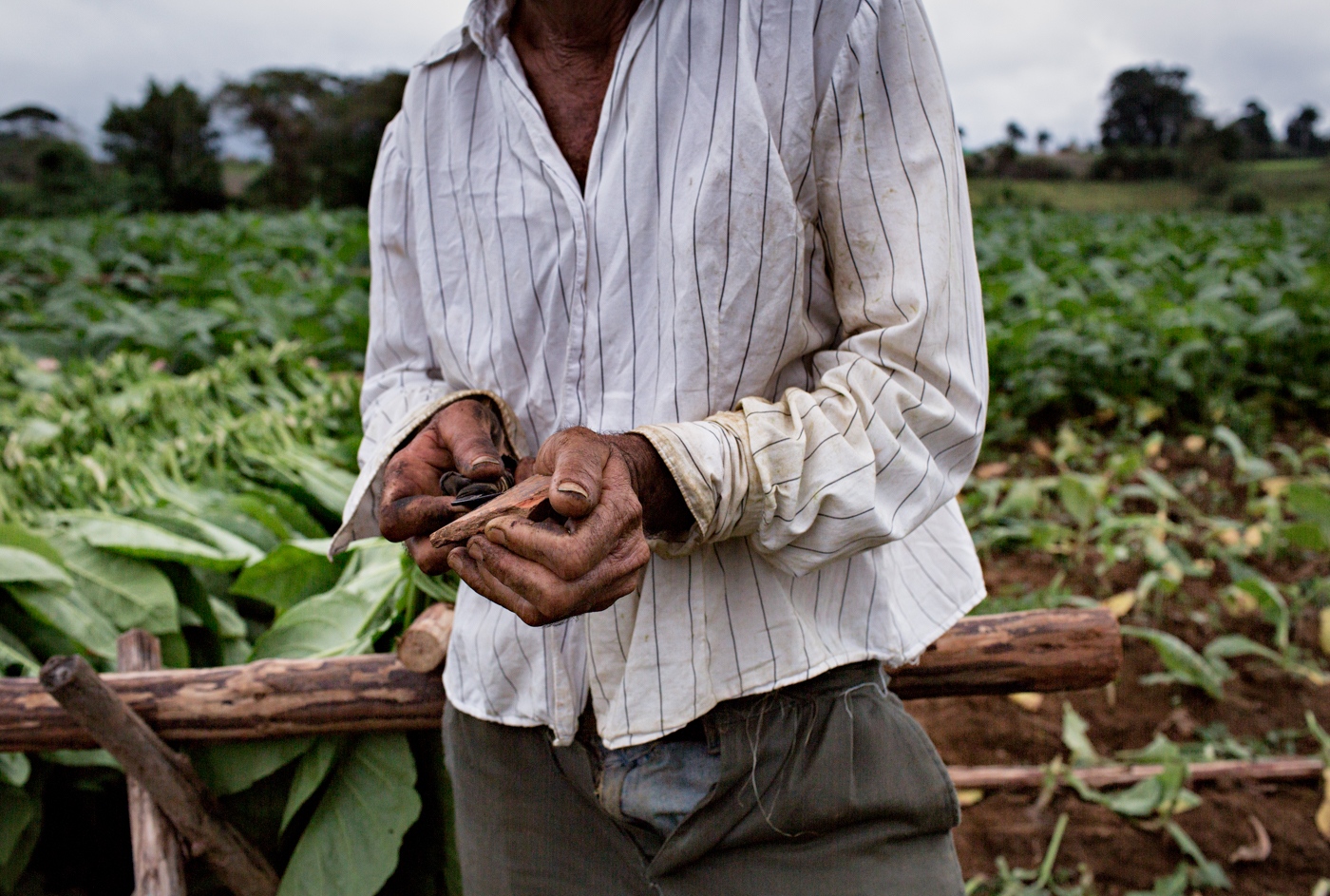 A tobacco farm worker sharpens his knife in a tobacco field during the harvest season in Vinales-a farming village two hours drive from Havana, Cuba 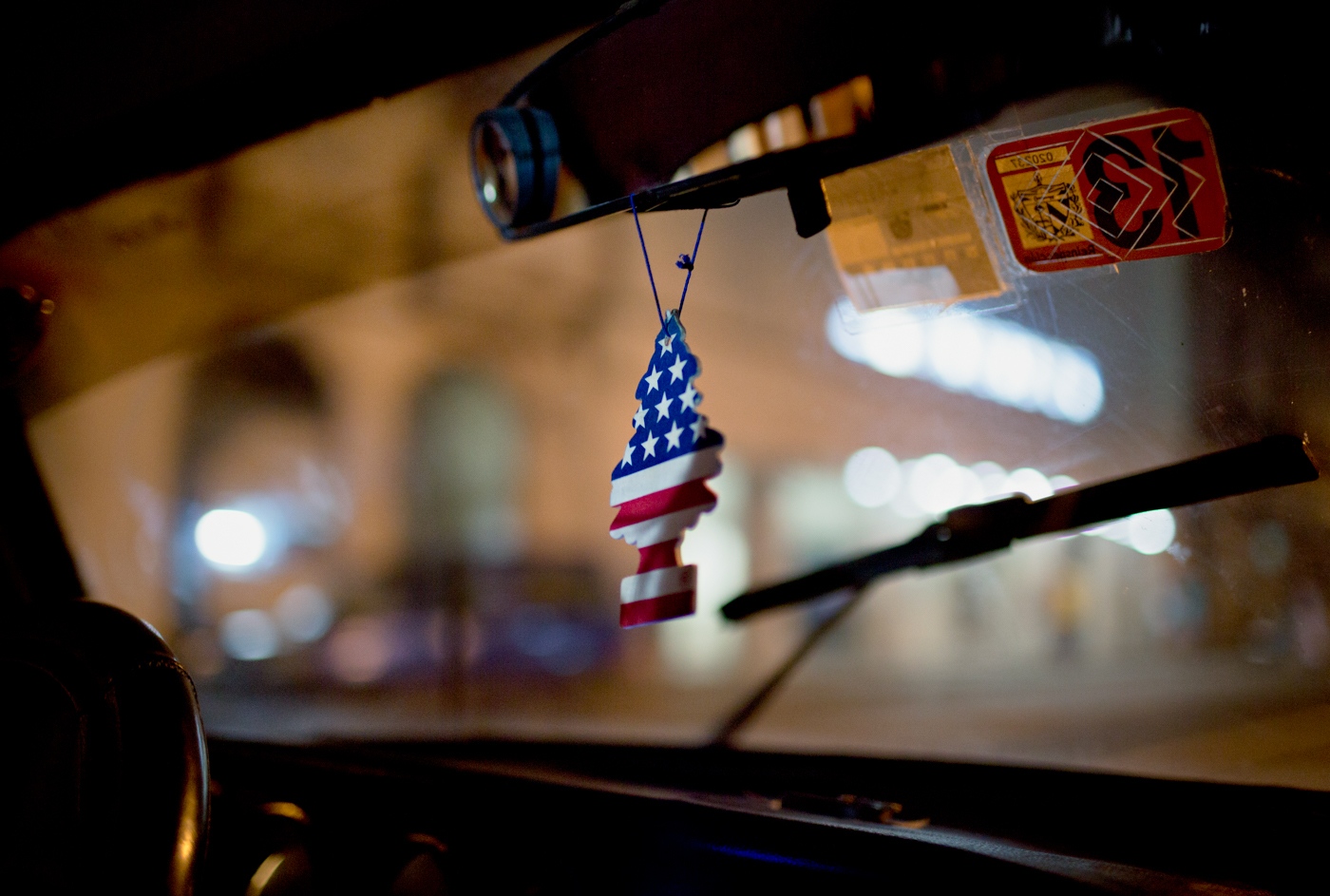 A taxi driver displays an air-freshener with the US flag on it. The Cubans are delighted at the relaxing of the political relations with the United States and generally have high hopes for their future. 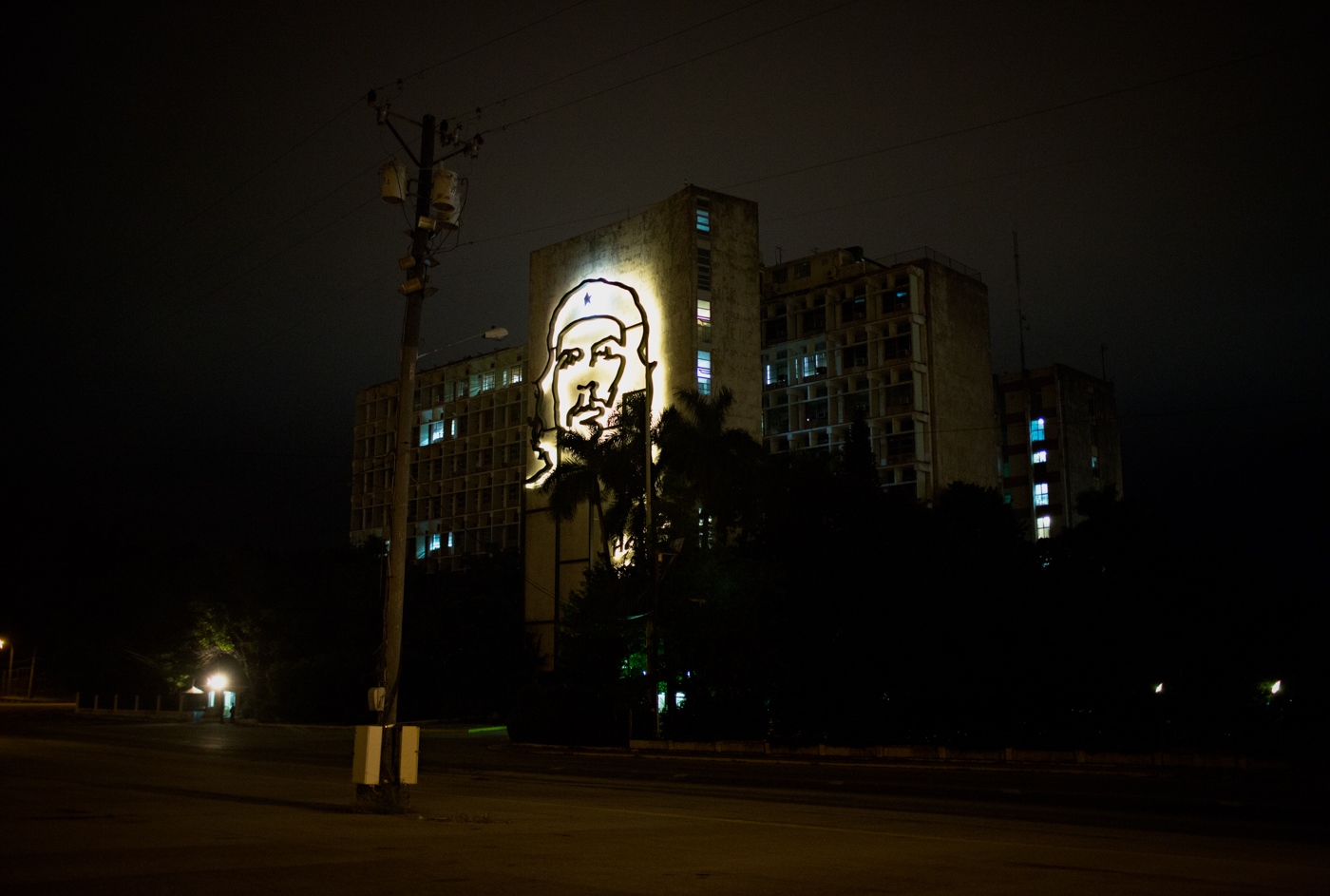 Plaza de la RevoluciÃ³n is where most political rallies takes place. The offices of the Ministries of the Interior and Communications building facades feature matching steel memorials of the two most important deceased heroes of the Cuban Revolution: Che Guevara andÂ Camilo Cienfuegos (sometimes mistaken for Fidel Castro). 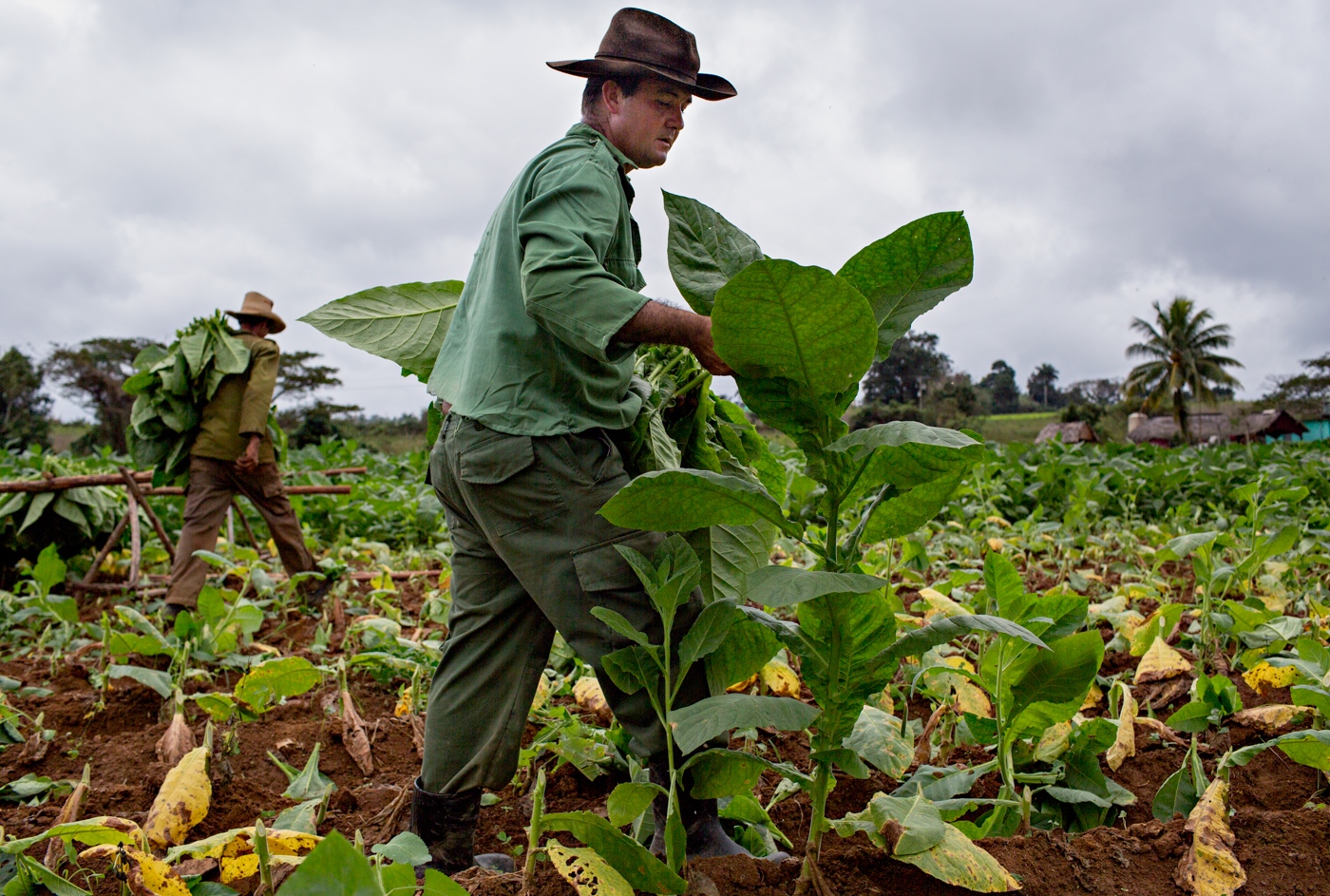 A tobacco farmer harvests tobacco leaves in Vinales-a farming village two hours drive from Havana. The leaves are hand harvested and then bundled and placed on wooden racks which then are taken into huts to dry. 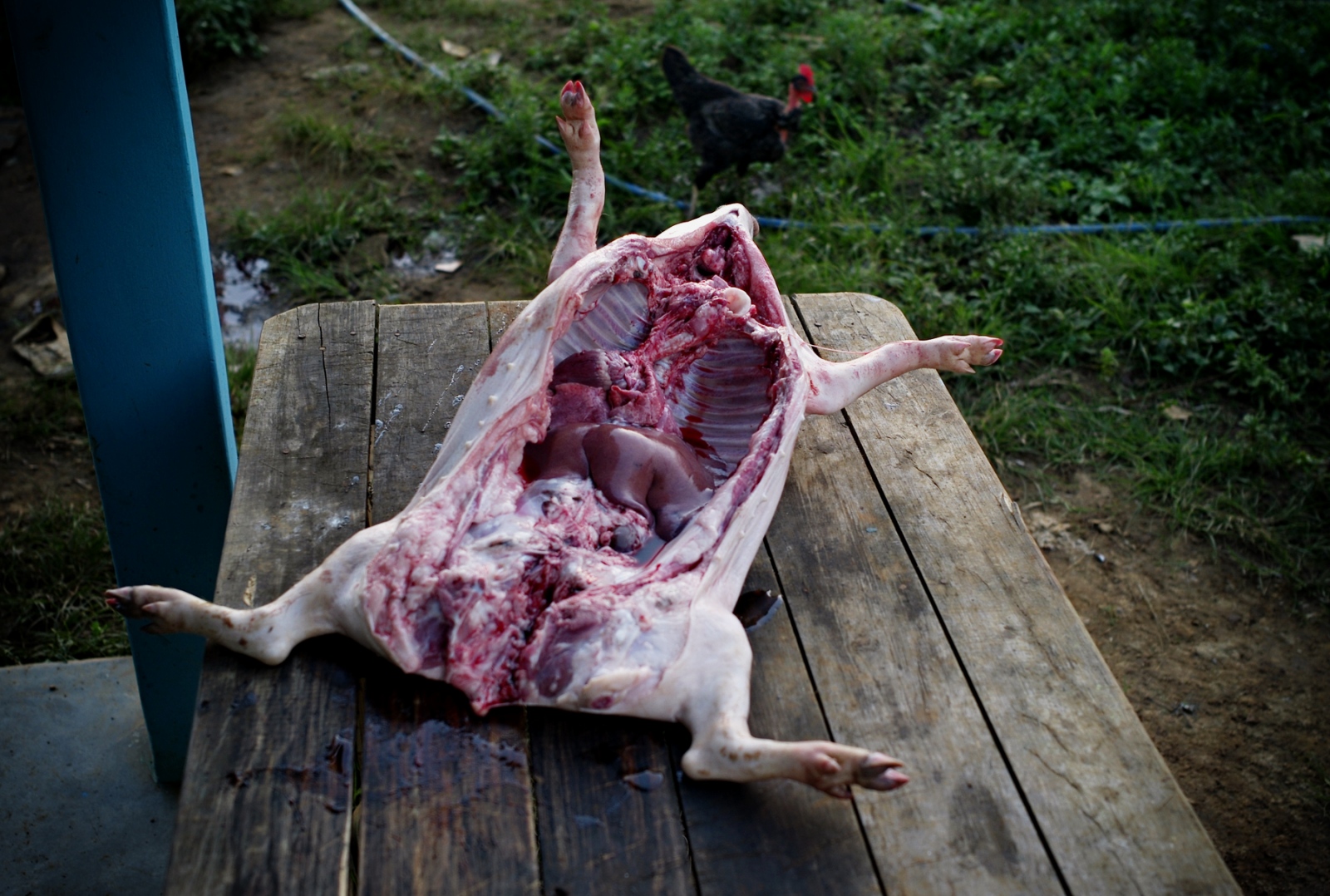 A freshly slaughtered pig is preparedÂ is slunch for the tobacco farmersÂ in Vinales - farming village two hours drive from Havana. 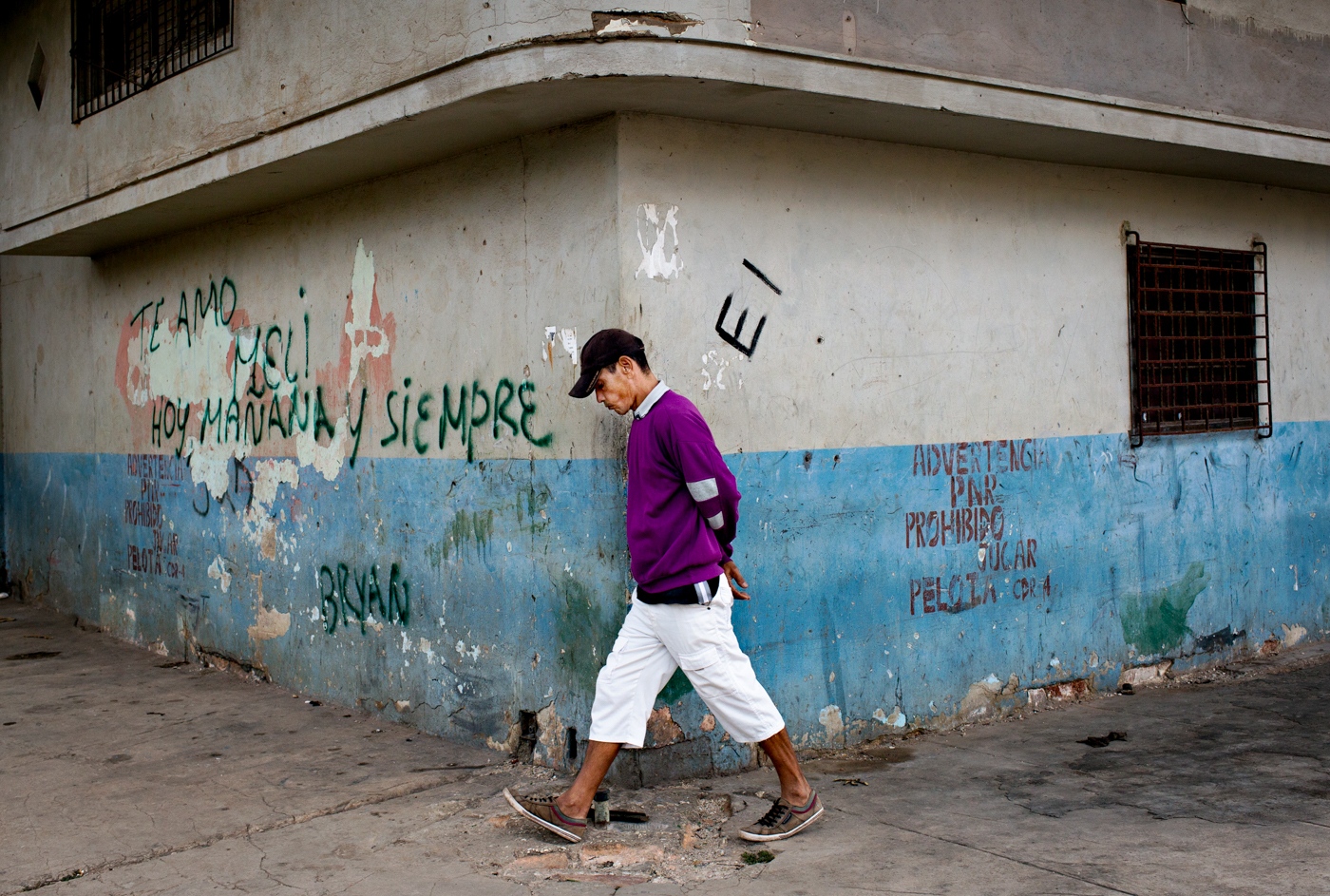 A man walks past a wall with graffiti which reads: "I love you Meli. Today, Tomorrow and Always - Bryan" in a neighborhood in Havana.

Since the 1990s, when the collapse of the Soviet Union (and the end of decades of subsidies to its communist outpost) saw Cuba descend into economic crisis, there has been a sense that this is a place on the cusp of a great political and cultural shift. There is no doubt that the economic reforms ushered in since 2008, when Fidel Castro handed over leadership to his younger brother Raul, have staked a marker in the fine Caribbean sand. Cuba is a country in motion. In fact, it will soon change again as in Dec. 2014, US President Barack Obama and Cuban President Raul Castro agreed to end 54 years of broken relations that began during the Eisenhower administration.

Although the tangible effects of the lifting of sanctions have been slow to manifest, things are changing. When I traveled to Havana in January of 2016, the only available flights from the US were chartered flights run by American Airlines. However, a month later in February, an agreement to allow regular commercial flights from the US to Cuba was signed into effect, promising an increased ease of travel. In November of 2015, Sprint signed a roaming agreement with the Cuban telecommunications company that, much to my companions' surprise, resulted in my cell phone being functional in Cuba, which allowed me to make and receive calls and text messages on my US phone while in Havana. In March 2016, President Obama traveled to Havana making it the first US President to visit Havana since the Cuban Revolution.

Walking on the streets of Havana is a feast for the senses. The people in Havana are not isolated in their own private bubbles, instead they engage in the world and experiences that surround them. We see children engaged in games of soccer, baseball, basketball or other games at all hours of the day and night. Makeshift boxing gymnasiums can be seen in every neighborhood. We see lovers, friends and families walking or simply hanging out on the Malecón spending time with one another, watching other couples, fishermen or cruise ships pass by in the ocean waters. Even a mundane experience such as taking public transportation is a delight of sights and sounds as the drivers of the city buses blast Salsa music for all to enjoy"silence, quiet and drudgery is not encouraged.

There is a dichotomy in the life in Cuba: the government provides the basic necessities such as food, shelter, healthcare (considered the best in comparable Latin countries), and education (literacy rate in Cuba is 99%); but there are no extras and at the same time, dilapidated residential structures where squatters have rigged the electrical boxes are omnipresent. Old American cars where the only original part is the body are kept in service as communal taxis spewing smoke along all major roads and streets in Havana. Lines for stores selling bread, and food items are long. But, pharmacies filled with affordable medications are many and open 24 hours a day 7 days a week.

Telling a local you are from the US is invariably met with delight and the quip about how our governments may disagree with each other but the citizens can always coexist and even enjoy the relationship. The Cubans appear to be hopeful about the future and the current development in the Cuban/US relationship; though at the same time they feel anxious about an unknown future: The last interactions the Cubans had with the US involved US companies exploiting the Cuban natural resources which then gave way to sanctions and military hostilities. The future will reveal the fate of this still fragile relationship.